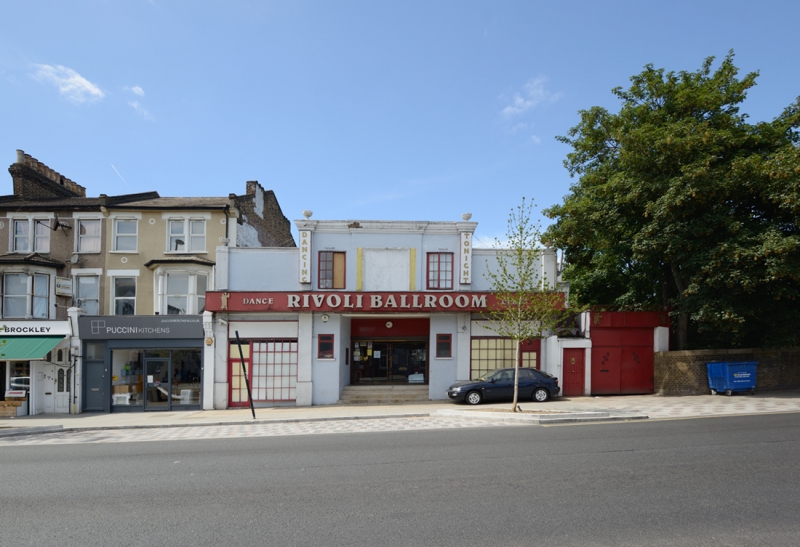 Ballroom, 1958-9, for the promoter Leonard Tomlin in a former cinema of 1913 by Henley Attwater. Minor later alterations.

EXTERIOR: The Deco-inspired elevation to Brockley Road dates from 1931 and comprises a central deep-recessed entrance reached by a broad flight of steps flanked by two simple shop fronts. Pilasters, topped with plasterwork urns, terminate the elevation and also accentuate the central section which has a raised parapet with a heavily moulded cornice. The two signs affixed to the pilasters, reading 'Dancing' and 'Tonight', may be 1950s but the other signage is later. The side and rear elevations have not been observed but are likely to be plain and determined largely by function.

INTERIOR: characterised by the eclectic deployment of neo-classical, Deco and oriental motifs in an exotic and luxuriant decorative scheme. This is largely late 1950s, although the auditorium ceiling survives from the earlier cinema. The entrance steps lead to the foyer, a corridor-like space with raked floor and Deco-style marquetry panelling. The main motif is a geometric composition of intersecting curves in a shape with broad segmental top, tapering centre and curved base. The design is accentuated through the use of dark wood inlay and a diamond shape in the centre is picked out in glass or mirror. Although 1920s in inspiration, it is characteristic of the 1950s fashion for reviving the Deco aesthetic that had been unwillingly abandoned with the onset of WWII. The foyer leads to the ballroom, a vast auditorium with a shallow barrel-vaulted ceiling, complete with raised viewing dais, stage, proscenium, fixed banquettes and a sprung maple dance floor. The decorative scheme is kitsch and flamboyant, the effect created through red velour padded walls with gilt picture-frame style panels and decorated pilasters, scallop-shaped lights, a red velour pelmet, French chandeliers and Chinese lanterns. The ballroom is flanked by two narrow bars, running the length of the hall, one of 1958 and the other of 1960. The former (to the right of the hall) is lined with booths and tables with leather upholstery in an arrangement evocative of a railway-carriage; the bar at the end of the room has an tiled front of Arabesque interlaced patterns; the room is lit by exotic saucer-shaped lamps decorated with a mixture of Georgian and oriental patterns. The panelling motif established in the foyer is continued on various doors, to the ladies powder room and the gentleman's cloakroom for example, and there is also signage throughout the building some of which, to the 'Buffet' for example, appears to be contemporary with the late 1950s refurbishment. There is a second function room, dating from the late C20, with a neo-classical decorative scheme with gilded Corinthian capitals, a modillion cornice and Adam-esque garlands along the beams which support a ceiling adorned with photographs of Old Master paintings; this room is not of special interest.

HISTORY: The Rivoli Ballroom was built in 1913 as the Crofton Park Picture Palace to designs by a Henley Attwater. Like the great number of local cinemas built in the early C20, it was a simple structure comprising a barrel-vaulted auditorium, accessed through a foyer from the street. The Picture Palace was refaced in the inter-war period - the Art Deco-style stepped parapet and decorative urns dates from this time - and a café was added to the rear; it was renamed the Rivoli Cinema in 1929.

The widespread popularity of television and the tendency for cinemas to be managed by chains led to the closure of many small or independent cinemas from the 1950s onwards. A great number of auditoria were converted to dance halls and subsequently to bingo halls or nightclubs as tastes in entertainment changed over the second half of the C20. On Boxing Day 1959, two and a half years after the screening of the last film (The Nat 'King' Cole Musical Story on 2 March 1957), the Rivoli Cinema reopened as the Rivoli Ballroom. The refurbishment had been carried out by a local businessman and dancing devotee, Leonard Tomlin, whose relative had been a lesee of the cinema in 1917. The original plans, approved by the local authority in September 1958, survive and reveal Tomlin's ambitious scheme for the interior which included a Canadian maple sprung dance-floor, crystal balls hanging from the ceiling, fixed seating around the auditorium and a side bar with booths. The makeover was clearly a success and in 1960 permission was sought for extension of the premises to include a member's bar. The building has been little altered since 1960, aside from an extension to the rear, and is still in use as a dance hall. In recent years it has become increasingly sought after by popular musicians for concerts (White Stripes) and video shoots (Elton John); attending a dance at the 'spectacular Rivoli Ballroom' is listed on Time Out's list of 101 things to do in London.

REASONS FOR DESIGNATION DECISION: The Rivoli Ballroom is listed at Grade II for the following principal reasons:
* special architectural interest for the highly-unusual interior of 1958, the total effect of which luxuriant, exotic and deeply theatrical;
* special historic interest as an eloquent and unusual witness to the era of American jive and swing bands, Lindy Hop, Jitterbug and Rock'n'Roll, alongside the continued popularity of traditional strict tempo ballroom;
* a rare surviving example of a once common conversion of an early C20 cinema to a ballroom.

* special architectural interest for the highly-unusual interior of 1958, the total effect of which luxuriant, exotic and deeply theatrical;
* special historic interest as an eloquent and unusual witness to the era of American jive and swing bands, Lindy Hop, Jitterbug and Rock'n'Roll, alongside the continued popularity of traditional strict tempo ballroom;
* a rare surviving example of a once common conversion of an early C20 cinema to a ballroom.