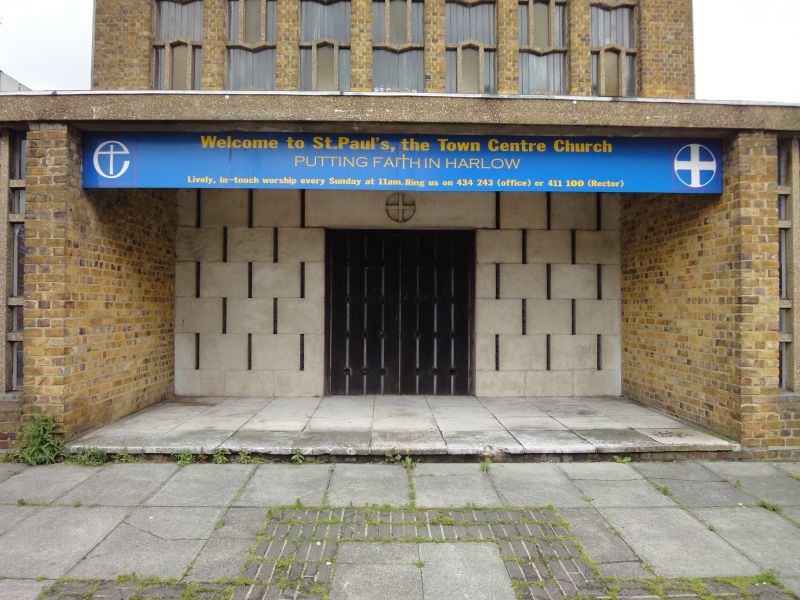 Parish church. 1957-9 to the designs of Humphrys and Hurst as the main or 'mother church' to the new town of Harlow; Charles H Hockley, structural engineer. Load-bearing brown stock brick, with concrete mullions and pre-cast tracery to the large areas of glazing. Shallow-pitched roofs with lower flat roofs to surrounding aisles, the main roofs originally clad in copper, with pre-cast and steel-tensioned fleche clad in copper over crossing. Short cruciform plan of nave, sanctuary, with choir gallery over the baptistry and organ loft (over the popular entrance) facing each other on either side. More ceremonial entrance doors also at west end. To the south-east is the Chapel of the Holy Spirit, balanced by vestries to the north-east and with a church hall and flat. To the south-west a covered way extends across a raised platform to bell tower with ringing chamber and wayside pulpit.

All aisles have tripartite mullion glazing. The nave is set behind a low narthex that extends beyond the church to an open porch under a shallow pitched roof at one end, and on the other into an open covered way linking the church and bell tower. Double plank doors incorporating narrow bands of glazing and square jewels of glass, flanked by brightly coloured West end. A projecting west end porch has mosaic inserts and is on a raised platform with steps. Similar treatment to projecting loggia at north-west corner, which has a shallow gabled roof, and to bell tower, where the projecting wayside pulpit is also decorated with blue mosaic and has a concrete canopy. Arrowslit windows to ringing chamber. The peel of bells in the tower were brought from a bomb-damaged East London church, symbolic as many of Harlow's inhabitants had also come from East London, and the cross is modelled on that for St Paul's. Similar doors on the south side of the church, again set behind a broad concrete porch. To the east, the church hall has clerestorey glazing in a set-back metal roof, while the adjoining flat has thick timber windows, those to the principal rooms of full height.

The interior of the church has always been painted in bright colours, with dark red ceilings for the aisles and blue ceilings with white beams for the nave and transepts. Nave largely glazed, a net of plain and lemon yellow glass reminiscent of Perpendicular grisaille glass, enforcing the image presented by the form of the tracery. Furniture and fittings are mainly by Reginald W Hurst, a very complete and highly decorative 1950s ensemble. Binns organ brought from Monmouthshire and rebuilt in 1967. C16/C18 sculpture of the virgin. Crucifixion by Ruszkowski. Processional cross by John Skelton. Mural by John Piper representing the recognition of the Risen Christ in the house at Emmaus (Luke 24, v.31). It was Piper's first mosaic, the theme chosen to convey the sense of Christ being always present in his House.

The choice of brick was chosen to provide a contrast to the Portland stone and concrete used for the surrounding buildings. As there were to be tall tower blocks nearby also, a fleche was preferred to a tower as a symbol for the church, and a low bell tower placed separately to house the bells taken from a bomb-damaged London church. The total cost was £40,000, indicative that this was an elaborate church for the times.

St Paul's was the town church for Harlow, the 'mother church' of the new town, which explains its high cost and elaborate design. The choice of brick and the contrasting primary colours used throughout the building show what a complex, integrated design the building is. Canon Knight, the first incumbent, was a major influence on the design of the church, having weekly meetings with the architects and consulting regularly with John Piper. He explained in 1995 that 'it was my intention to keep to the best of traditional cruciform design, but making imaginative use of modern materials, particularly the yellow stock brick for its hardness and durability. The interior décor was excitingly colourful and bright.' An early sketch, exhibited at the Royal Academy in 1956 shows a more traditional, cruciform plan, with more glazing, than the more complex design that finally emerged. The quality of the internal fixtures and fittings, the completeness of the ensemble and the sympathetic composition they form with John Piper's mural makes this an exceptional church. Piper's work antedates in execution his work at Coventry Cathedral, completed in 1962. St Paul's, Harlow, was among the very first buildings erected in the centre of Harlow, and was the first church in any new town centre. It is moreover the finest church by this specialist firm of church architects, who worked with the leading ecclesiastical architect N F Cachemaille-Day before forming their own practice. It was also their last work, as Reginald Hurst died while the building was under construction. The building was completed by Derrick Humphrys.

Church of 1957-9 by Humphrys and Hurst, ecclesiastical specialists who designed a particularly lavish church as the 'mother church' of the new town. An unusual plan with a separate belltower and liturgically ambitious, the exceptionally fine and complete fittings by Hurst are complemented by a mosaic by John Piper, his first completed church work. St Paul's was the first church completed in any post-war new town centre.