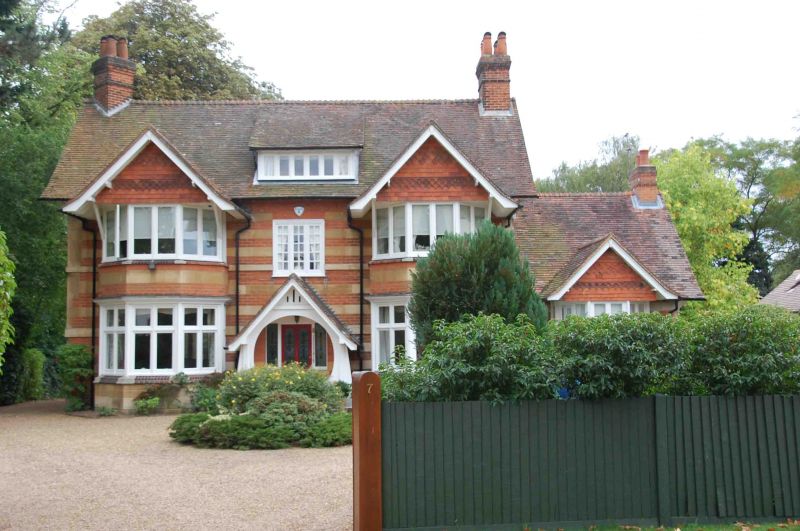 PLAN: A three-storey house, with the second floor within the roof space, arranged around a central entrance hall or landing on each floor.

EXTERIOR: The house has two main facades: to the east is the entrance façade fronting South Drive; to the west is the garden façade. The former is a near symmetrical façade of three bays which has prominent horizontal brick and stone banding. There are two projecting tile-hung gabled bays with two-storey bay windows either side of the entrance bay, which itself has an unusual Arts & Crafts wooden porch with a multi-paned stair light, and then a roof dormer above. There are two brick chimney stacks on the ridge to the north and south. One is perpendicular and the other diagonal to the ridge. The replacement front door is panelled with stained glass lights and is flanked by further stained glass lights. There is a kitchen range addition to the north which although modern has been constructed in a complimentary style.

The rear garden façade is asymmetrical with a gabled bay to the north, a tile-hung roof dormer to the south and the addition of the aforementioned kitchen extension and also a rear C20 conservatory. This elevation is typified by polychrome brickwork such that the horizontal banding theme from the main façade is here delivered in red and buff brick with buff brick also used to create exaggerated window surrounds. The quoins to the corners of the building are in stone as at the front of the house.

HISTORY: 7 South Drive dates to c1908-9 to the design of Frank Morris (1871-1908), son of Joseph Morris who founded the family architectural firm. The design is sometimes attributed to his sister, Violet, although Frank seems more likely on stylistic grounds. The house was originally known as 'Clun' and was built for a Miss Emily Georgina Howard. South Drive was undeveloped at the time of the first edition Ordnance Survey map of 1871, being open fields to the south-east of Wokingham town centre. Land was acquired here by the People's Investment Company (PIC) in 1898 with development beginning shortly after. PIC was founded in 1888 primarily for the development of land in Reading and the surrounding area with profits from the developments paying a dividend to its investors. 7 South Drive has remained largely in private ownership since built although was requisitioned by the Women's Land Army during the Second World War. In 1946 the house was renamed Nursteed', a house name transferred with its then owner from 8 South Drive. Renovation in the 1970s resulted in the removal of some fireplaces and first floor windows and their replacement in uPVC. Some of these, such as the front two bay windows, have now been reinstated with good quality timber reproductions. Further late C20 modifications include the addition of a conservatory to the south-west, kitchen to the north and a detached garage to the west. These late C20 elements are not of special interest.

Joseph Morris was the head of the Morris family of architects. He was County Surveyor for Berkshire between 1871 and 1906. His son Francis (also known as Frank) served his apprenticeship with his father in 1888 before the company became Morris and Son from 1896. Joseph's daughter Violet (1878-1958) also joined the firm and was one of the first female Chartered Architects. They designed many domestic properties in Berkshire, specifically in the Reading and Wokingham areas, then latterly in Somerset after Joseph and Violet moved there in the early C20. The firm was also responsible for a number of police stations such as the one in Wokingham of 1903, as well as churches including the Gothic style Church of the Ark of the Covenant, Upper Clapton, Hackney (1893-96, Grade II). Their works are listed in Godwin Arnold & Gold (1989: 81-7). Frank's style was very much rooted in the Arts & Crafts Movement. He was obviously involved with a number of collaborative projects as part of the family firm, but another design attributed specifically to him is the nearby house at 23 Murdoch Road (1900). After the partnership dissolved in 1905, Frank, who still had a house in Wokingham, set up chambers in London where he prematurely died of typhoid in 1908.

REASON FOR DESIGNATION DECISION:
7 South Drive is designated at Grade II for the following principal reasons:
* A bold and striking design exhibiting Arts & Crafts influences particularly in the form of its unusual porch.
* An Edwardian house which displays confident handling, unusual detailing, quality materials and which is finished to a high standard.

REASON FOR DESIGNATION DECISION
7 South Drive is designated at Grade II for the following principal reasons:
* A bold and striking design exhibiting Arts & Crafts influences particularly in the form of its unusual porch.
* An Edwardian house which displays confident handling, unusual detailing, quality materials and which is finished to a high standard.