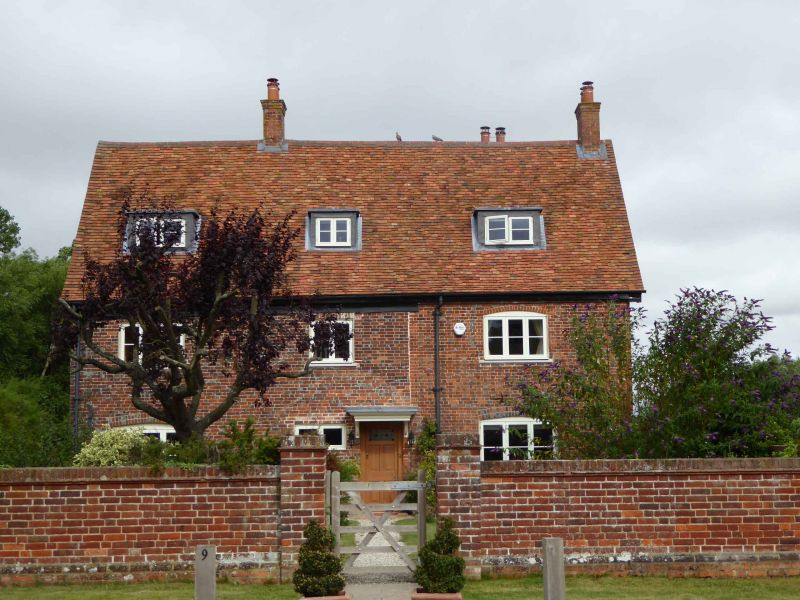 EXTERIOR: Church Farm farmhouse is a brick-cased, south-east facing building of three front bays and two storeys, with dormer windows lighting converted attics. The brick casing to the front is typical of the area in that it exhibits the decorative use of blue headers; it is of two phases, probably fairly close in date and of the later C18. The left-hand two bays are the older, the brickwork irregularly bonded with reddish bricks with dark blue headers. This is a refronting, later in date than the narrow-bricked gable wall to the left which is probably of the late C17 or early C18 (projecting early C20 ground-floor window bay not of interest). The right-hand front bay is of a more orangey brick, in a regular Flemish bond with blue brick headers producing a chequered pattern. This probably represents a rebuilding of this end of the property (shown with an end-jetty on an illustration of 1764), extending to include a short, integral, single-storey range to the rear. Front door to the centre (immediately against the right edge of the older two bays); C20 brick porch (not of interest). The windows give an approximate symmetry to the front: three-light casements to the end bays (those to the ground floor slightly longer than those above) with a small two-light casement to the centre of the first floor, and a small pair of four-pane casements to the left of the front door lighting the staircase within. Most of the windows have been renewed in uPVC.

To the rear-right a large external chimney stack with flint and stone lower part and brick above is recognisably that shown on the illustration of 1764. A similar (but presumably rebuilt) chimney rises from the rear-left. C20 brick lean-tos against the rear of the house and against the c.1800 rear range are not of interest, nor is the C20 brick extension to the c.1800 rear range.

The roof is of red tile, relaid when the roof was partly replaced in the early C20; two brick stacks of this date rise from the centre of the older two bays and from the right-hand gable.

INTERIOR: The front door opens into a hall which extends the full depth of the property, and which extends left of the door (as entered) where a simple staircase of c.1800 leads off at right angles against the outside wall. Front room with kitchen behind in right-hand bay; dining room in left-hand bay; and small office in centre bay with bathroom behind. Upstairs the plan is roughly replicated, and there are some surviving planked doors, perhaps C18. There is also a curved brace visible in the centre-rear first-floor bedroom relating to the possible crown post roof above. The staircase continues to the attic floor with a bedroom in each end bay (only that to the right with fireplace) and a store room to the centre. The attic rooms are set within the probably later C16 roof; this survives largely intact in the older two bays with tie beams, collars and common rafters (and thus possibly of crown-post type), as seen most clearly in the closed attic space over the collars. Over the newer bay is a replacement roof of the early C20.

HISTORY: Church Farm is identified by the Victoria County History as the rectory farm, the living being in the possession of All Souls College from 1440. It was therefore either the college, or its tenants by agreement, which successively built and rebuilt the farmhouse. The Church Farm complex stands immediately west of St Margaret's church (listed Grade I) on the north edge of Lewknor. The complex includes, on its east edge, a Grade I listed building, a mid-C14 aisled house which was later converted to a barn.

REASONS FOR DESIGNATION DECISION: Church Farm farmhouse, Lewknor, is listed for the following principal reasons:
* its core is essentially of the later C16, as shown on an illustration of 1764
* two-thirds of the roof of this date is extant
* for its attractive external brick casing of the late C18
* for its setting: its buildings include a Grade I listed C14 barn, beyond which is the parish church (Grade I) with which Church Farm was associated tenurially.

The farmhouse at Church Farm, Lewknor, is designated at Grade II, for the following principal reasons:
* its core is essentially of the later C16, as shown on an illustration of 1764
* as two-thirds of the roof of this date is extant
* for its attractive external brick casing of the late C18
* for its setting: its buildings include a Grade I listed C14 barn, beyond which is the parish church (Grade I) with which Church Farm was associated tenurially