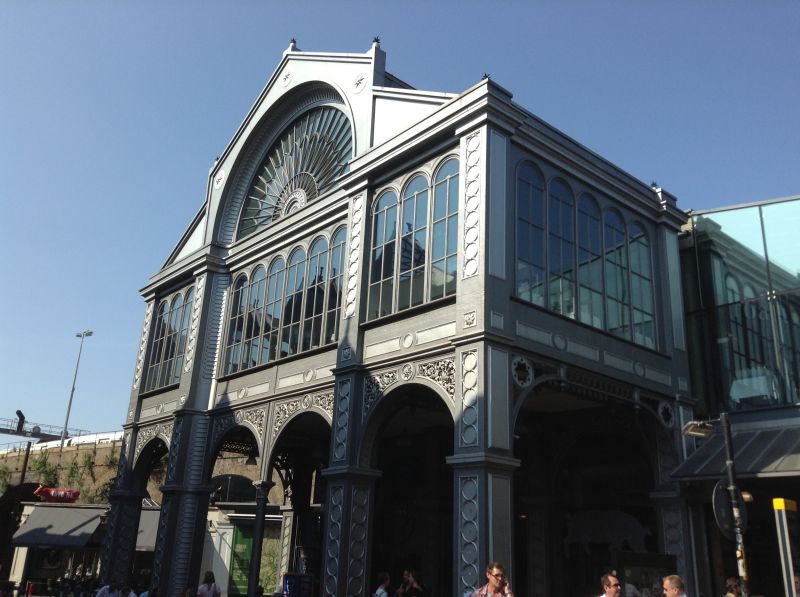 II
Originally a multi-purpose space for hire alongside the Royal Opera House, Covent Garden, now (since being moved to its present site c2003) a decorative frontage to Borough Market with first-floor restaurant above an open, arcaded, market space. 1858-9 by Edward Middleton Barry with a replacement welded steel pediment/tympanum of c2003 around the original semi-circular glazed arch to the front.

EXTERIOR: The relocated structure formerly comprised the southern, Covent Garden Piazza-end, front of the Floral Hall. It is of two storeys, three bays wide across the front (the centre bay double), and one bay deep. The ground-floor arcade is supported on square pillars apart from at the centre where a slender, circular post is used. The first floor is light and airy, and is lit by tall, round-headed windows which run continuously across the front and round the sides and by a large radial fanlight with elaborate sunburst glazing panels above the centre of the front. The fanlight is set beneath a simple gabled steel parapet which replaced an outer enriched band of glazing in the post-1956 restoration. The whole is painted in tones of silver, which emphasises its metallic structure and sets it apart from the adjoining buildings.

As noted by the Survey of London, decorative interest was imparted through the use of the plentiful use of perforated ornament and panelling notably the pierced, foliate, spandrels of the front ground-floor arches and the abutting raised rings which run up the full height of all the pillars.
When re-erected c.2000 various modern materials were employed: the semi-circular truss arches, the I-section purlins, and the glazing bars are all steel/uPVC replacements.

INTERIOR: The ground floor comprises (as it did originally) an open arcade. The first floor, open to the roof (rebuilt in later C20) is a single open space occupied in 2006 as a restaurant dining room. The interior is not of special interest.

HISTORY: The Royal Opera House is the third theatre on the Covent Garden site. The first theatre, the Theatre Royal, London's most luxurious, opened in 1732. Major alterations were made by Henry Holland in 1792 but in 1808 the building burnt down. A new Theatre Royal opened in 1809 designed by Robert Smirke. That saw many dramatic triumphs and innovations before being recast as the Royal Italian Opera House in 1847. This was lost, only the frieze surviving, to fire in the mid 1850s. A third theatre, designed by Edward Middleton Barry, opened in 1858. This was a fireproof building in a regular classical design, and alongside it Barry built the Floral Hall in 1858-9. This was a glass and iron frame structure intended to serve as a concert hall annexe and winter garden. The theatre became the Royal Opera House in 1892.

While the main theatre remained little-altered after its construction, the roof of the Floral Hall had to be rebuilt after fire damage in 1956 which resulted in the loss of its lofty glass vaults and dome. In the early 1980s a huge extension programme was embarked upon at Covent Garden and as part of this the southern portico of the Floral Hall was taken down in the early 1990s and put into store. It was subsequently re-erected to form a frontage (opened 2004) to Borough Market in Southwark.

Borough Market, claimed as London's oldest fruit and vegetable market, reopened in the 1850s in buildings designed by H Rose, to which additions were made in 1863-4 by E Habershon. This building proved impractical and was in turn replaced in two campaigns, in the 1890s and the 1930s. These are the structures which survive today onto which the resited Floral Hall (which is very obviously different in character) has been grafted.

REASONS FOR DESIGNATION: The resited Floral Hall portico at Borough Market is designated at Grade II for the following principal reasons:

* Although resited and representing only a part of the Floral Hall as constructed at Covent Garden (the in situ part of which is also listed Grade II), it retains much of the essence of Barry's original building which was notable for its technological innovation and richly ornamented design.

The introduced interior fittings to the first floor restaurant, and the stairs to it, are of lesser significance
SOURCES: The Survey of London 35 (1970), 108 and pl 68; B. Weinreb and C. Hibbert, The London Encyclopaedia (1983), 204-5; Oxford Dictionary of National Biography s.v. Edward Middleton Barry

The resited Floral Hall portico at Borough Market has been designated at Grade II for the following principal reasons:

* Although resited and representing only a part of the Floral Hall as constructed at Covent Garden (the in situ part of which is also listed Grade II), it retains much of the essence of Barry's original building which was notable for its technological innovation and richly ornamented design.

The introduced interior fittings to the first floor restaurant, and the stairs to it, are of lesser historic interest.