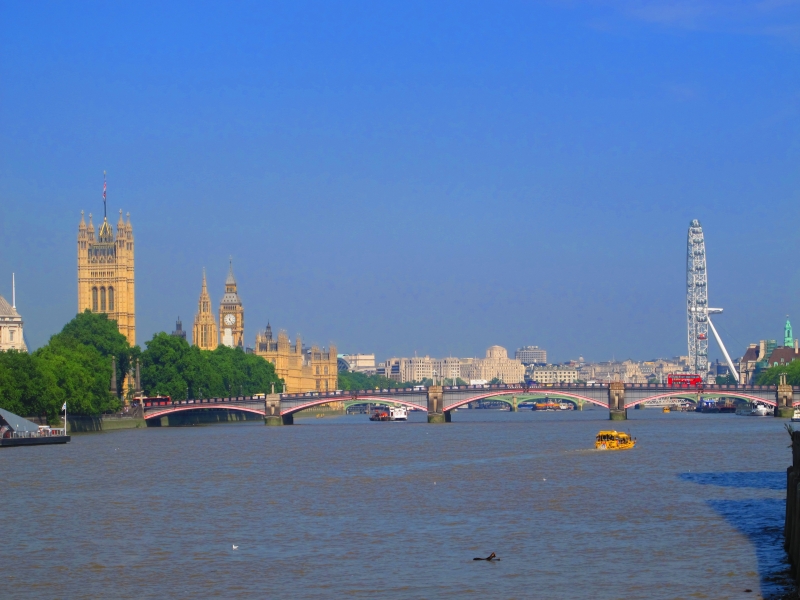 DESCRIPTION: Lambeth Bridge is a five-span steel arch structure carried on granite-faced reinforced concrete piers and abutments. With a total length of 236.5m, the steel superstructure is made up of a 50.3m centre span, two intermediate ones of 45.4m, and two shore spans each 38.1m long. The shallow steel arches, each consisting of nine ribs, support a reinforced concrete roadway between the balustrades, divided into a carriageway flanked by two footways. Steel caissons were used in the construction of the concrete piers which, like the abutments, are cased in polished Cornish granite. The coats of arms of London County Council are sculpted on the piers, below which two granite arms curve down to the top of the cutwaters.

The cast-iron balustrade and lamp stands augmented by steel latticework pylons were designed to honour the bridge's inauguration by King George V. Double lamps carried on granite uprights adorn each of the piers, and single lights on black lattice supports stand at intervals along the balustrades. On the approach to the bridge, the lamp standards are blue and supported by a LCC crest. In recognition of its proximity to the Palace of Westminster, Lambeth Bridge is painted predominately red, a reference to the colour of benches in the House of Lords (Westminster Bridge (qv) is painted green symbolising the benches of the House of Commons). Obelisks at either end of the bridge are topped by stone pinecones, ancient symbols of hospitality; they are also thought to resemble pineapples and are linked to the renowned C17 botanist John Tradescant who is thought to have introduced the fruit to this country and is buried in the former Church of St Mary-in-Lambeth (now the Museum of Garden History) on the eastern approach to the bridge.

HISTORY: Lambeth Bridge was begun in 1929 and opened by King George V and Queen Mary on 12 July 1932. The bridge was fabricated and erected at an approximate cost of £80,000 by Dorman Long & Co Ltd, one of the foremost bridge building firms of the era who also built the Tyne Bridge (1925-28) and the Sydney Harbour Bridge (1928-32). In 1965, Lambeth Bridge became the first of London's crossings to be tunnelled beneath to provide pedestrian access along the embankment.

The site of Lambeth Bridge was an ancient landing stage from the C13 that was used to receive the monarch on state occasions. Before a bridge was erected, a horse-ferry operated between Lambeth and Millbank under the control of the Archbishop of Canterbury who resided at Lambeth Palace. It is remembered in the name Horseferry Road, the western approach to the bridge.

An Act of Parliament authorising the construction of a bridge at Lambeth to serve the growing population was passed in 1809 but nothing came of it. The 1820s, 30s and 40s saw further bills, acts and other attempts to resurrect the proposal, all fruitless, and it was not until 1861 that the Lambeth Bridge Act incorporated a company to construct a toll bridge to connect Church Street (now Lambeth Road), Lambeth with Market Street (now Horseferry Road), Westminster. The bridge, erected from the designs of Peter W Barlow at a cost of £48,924, was opened in November 1862. It was of stiffened suspension type, 252.4m long, divided into three spans, each 81.7m wide, by piers carrying the towers which supported the suspension cables. Tolls were abolished in 1879 but by this time the iron structure had begun to rust severely and major repairs had to be carried out in 1887. Despite this, the state of the bridge continued to deteriorate and in 1910 it had to be closed to vehicular traffic. Rebuilding was delayed owing to the 1914-18 war, but in 1924 the London County Council obtained parliamentary powers to construct a new bridge and to widen and raise the approaches at either end. In 1929 a temporary footbridge was placed across the river, which was removed when the new bridge was completed and opened in 1932.

REASONS FOR DESIGNATION DECISION:
* Lambeth Bridge's urbane classical appearance is a landmark on the Thames and the bridge has an interesting mix of stone and steel and a graceful arched profile.
* The bridge also has special historic interest as part of the continuum of river crossings at a place where Londoners have traversed the Thames since the C13.
* Of further historic note is the symbolism of the ornamentation on the bridge celebrating the LCC and the reign of George V. The red paint is a further point of note, and links the bridge to the unique ensemble of political institutions on this stretch of the Thames, including the Houses of Parliament and the former headquarters of the LCC at County Hall.
* Lambeth Bridge has group value with these buildings and others in close proximity: Lambeth Palace (Grade I); the Palace of Westminster (Grade I); the Church of St Mary-in-Lambeth(Grade II*); the contemporary Norwest and Thames Houses of 1928 which frame the northern approach (both Grade II); and, further downstream, Westminster Bridge of 1862 (Grade II*).