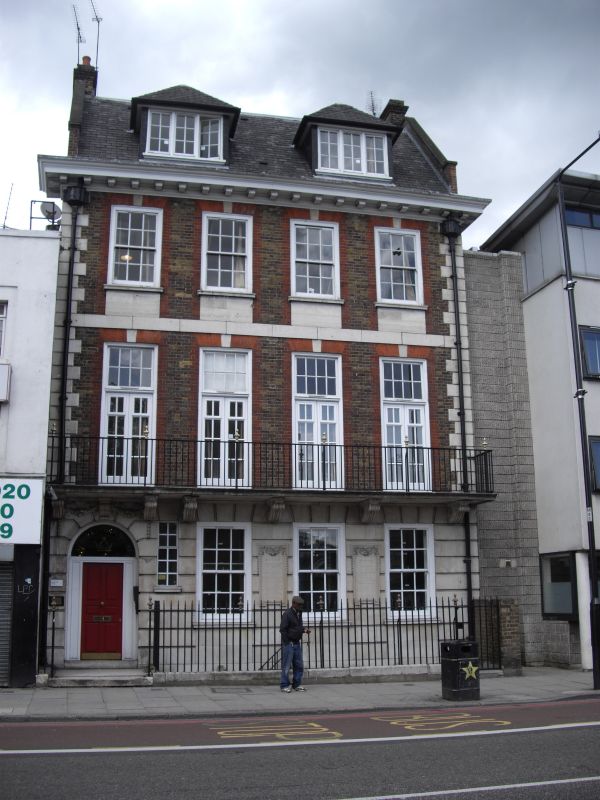 MAIN HOUSE: five bay red brick façade to Mile End Road with three storeys plus basement and attic. The facade is in the style of an early C18 house: the red rubbed brick arches to the timber sash windows, prominent stone quoins and plat bands, timber modillion cornice and hipped dormer windows in the attic mansard are features characteristic of that period of domestic architecture. The elevation is busily articulated, for example the stone keystones to the first floor windows abut the plat band, which in turn touches the window aprons of the next storey; the quoins are large too and there are only small sections of plain brickwork elevation between these and the red brick window surrounds. Such features successfully evoke the terraced houses of early Georgian London, which were constructed by skilled artisan craftsmen rather than architects and often plentifully detailed. Also historicist is the rusticated stone-clad ground floor with its doorcase carved with garlands of fruit and foliage. Two inscribed stone panels on the ground floor have lugged surrounds and record the opening of the building on 16 February 1913 by Edward Lumbrozo Mocatta and the historic interest of the site, both as an early location for a Jewish hospital and for the surviving cemetery to the rear which is described as 'the first cemetery acquired by Jews after their resettlement in this country'. The rear is in the same style as the façade, but with much plainer detailing and fewer stone dressings. Balconies run across the upper storeys and there are two bay windows at ground floor level.

INTERIOR: the E-shaped plan above ground floor provides two light wells into this densely built up plot. There are skylights in between the wings on the ground floor and the main E-shaped circulation space around them survives well, although most of the original rooms have been subdivided to create student accommodation. The hallway and landings have arched ceilings and a number of original double doors. The staircase retains its timber handrail and decorative metal balustrade. Fireplaces have been long removed from the rooms but window casing, door architraves and cornices survive. There are also some wall cupboards and a second timber staircase in the attic.

MARRIED COUPLES' COTTAGES: this secondary range is much plainer architecturally but is historically and functionally linked to the main range. The two storey row of cottages is located to the north-east of the main building and originally housed married couples who had been admitted to Beth Holim. The cottages and main house are linked by a veranda which, though altered, appears on Edwardian maps and is probably in parts the original. The brick row of cottages is L-shaped around the corner of the cemetery and has tiled pitched roofs. The five front doors are the original plank doors and the windows retain their timber casements with leaded lights. The original number of houses is not clear, but there are three surviving staircases. Two are part of clearly-defined individual houses, with two rooms on each floor off a small stairway. The third is part of a larger unit which may have once been two smaller houses. There is a plaque on the façade, designed in the style of a C17 grave marker like those found in the adjoining cemetery, which records: 'these cottages rebuilt by Ella Mocatta' with the date 1913. There have been single storey additions and alterations to the almost blind rear elevation, such as the insertion of at least one plastic window and a part of the wall rendered and painted blue. This elevation is of little interest.

HISTORY: The buildings were a hospital and old people's home for Mile End's Spanish and Portuguese Jewish community, known as Beth Holim. The institution is much older than its only-surviving buildings. A plaque on the façade records that there was a Jewish hospital for poor women and lying-in on this site in 1665; other sources (Sharman Kadish's Jewish Heritage in England, for example) locate Beth Holim's origins in Whitechapel in 1748, moving to Mile End in 1790. Certainly the site on the Mile End Road was occupied by a Jewish hospital by the late Georgian period and a building labelled 'Jews Hospital' features on John and Christopher Greenwood's map of London published in 1830. There appears to have always been more than one hospital building on the site. In addition to the main range along the Mile End Road, the first edition OS map of 1876 shows a building in the same location as the married couple's annex, also L-shaped, and labelled 'Asylum for the Aged'.

The rebuilding of Beth Holim was sponsored by the Anglo-Jewish Mocatta family, who came to England from Spain in the 1650s. This area to the north of Mile End Road has a long-association with Jews from the Iberian Peninsula. The first cemetery for Sephardic Jews in England, known as Old Velho Cemetery, was established here in 1667. It survives to the rear of Beth Holim and is listed Grade II. The history of continuous settlement of Jews in England, beginning under Oliver Cromwell's Protectorate in 1656, is celebrated in the rebuilt Beth Holim. Not only is there a plaque on the façade commemorating Old Velho and the C17 origins of the hospital for poor and lying-in women, the architectural style of the new building references the period in which Jews were readmitted to England too. In the Edwardian period, urban domestic architecture dating from the mid C17 to the early C18 was often considered as a single stylistic phase. The historicist design of Beth Holim is inspired by the terraced houses of the early C18, and by stylistic assocation the architecture of the 1650s too. It also fits into the contempory fashion for the style known as Wrenaissance - i.e. a revival of the architecture of Christopher Wren during the second half of the C17.

REASONS FOR DESIGNATION: The two buildings of Beth Holim, now Albert Stern House, are listed at Grade II for the following principal reasons:
* the main elevation is a well-composed, precise interpretation of an early C18 house, strong in both detail and craftsmanship;
* the use of materials is good and the colourful combination of stock brick, red brick, stone dressings, timber windows and slate roof contributes to the historicist effect;
* while much plainer architecturally, the married couples annex survives well and is a characterful and integral part of the site;
* both components have strong special historic interest for their connection with Mile End's Sephardic Jewish community, expressed directly through plaques on both façades and more obliquely in the architectural style of the main building;
* both have group value with the Old Velho Cemetery, founded in the mid-C17, to the rear.

The two buildings of Beth Holim, now Albert Stern House, are designated at Grade II for the following principal reasons:
* the main elevation is a well-composed, precise interpretation of an early C18 house, strong in both detail and craftsmanship;
* the use of materials is good and the colourful combination of stock brick, red brick, stone dressings, timber windows and slate roof contributes to the historicist effect;
* while much plainer architecturally, the married couples' cottages annex survives well and is a characterful and integral part of the site;
* both components have strong special historic interest for their connection with Mile End's Sephardi Jewish community, expressed directly through plaques on both façades and more obliquely in the architectural style of the main building;
* both have group value with the Grade II-listed Old Velho Cemetery to the rear, founded in the mid-C17.