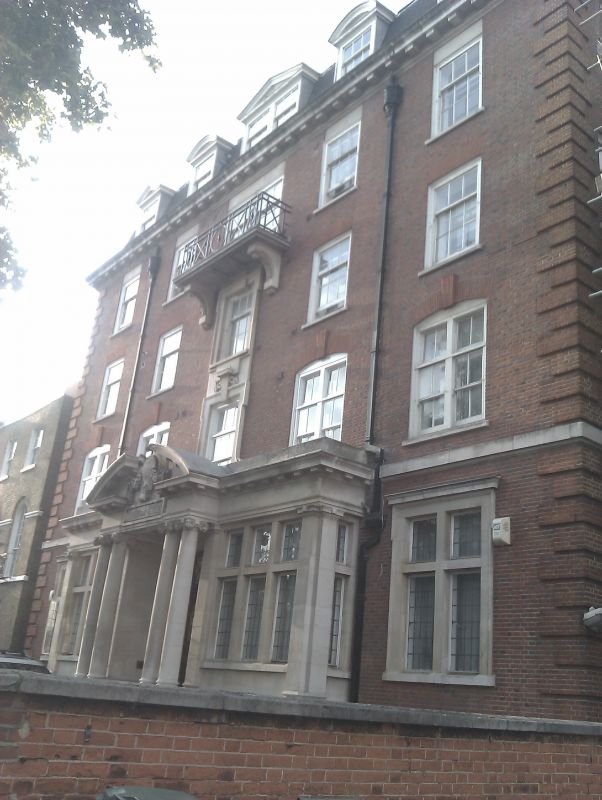 EXTERIOR: Tredegar House is set back from Bow Road and has a five bay brick façade with four storeys plus raised basement and hipped attic roof, and tall brick chimneys. The Wrenaissance style - which was a revival of the architecture of the second half of the C17 - is conveyed through the brick quoins, stone dentil cornice, timber sash windows and dormers with alternating triangular and segmental pediments. The most striking feature of the elevation is the projecting stone centrepiece incorporating the ground floor mullion and transom windows and a central entrance, this with broken segmental pediment, paired Ionic columns, decorative cartouche and lettering reading 'Tredegar House'. The upper storey windows in the central bay have stone surrounds too, and the top floor window leads to an iron balcony supported by stone console brackets. The accents of blue brick enliven the predominately red brick façade and the overall quality of craftsmanship is good, from the stone carving to the gauged brick arches over the windows, some segmental some flat. The rear is plainer but shares the good quality materials and craftsmanship of the façade.

SUBSIDIARY FEATURES: In the corner of the gardens there is a summer house in a similar style and materials, along with garden walls, garden paths and iron overhang. The original railings and the brick and stone gate piers and railings bounding the forecourt in front of the building survive.

INTERIOR: The original timber front doors, with modern glass in a blue cross design, lead to a vestibule with a second set of original doors to a large entrance hall. The hall has four Composite columns at its corners and an attractive terrazzo floor. There is a plaque commemmorating the opening of Tredegar House in 1912. To the left of the hall is the main staircase, complete with original timber handrail, metal balustrade and more terrazzo floors. The lift in the stairwell is modern, replacing an earlier lift. Only one of the flats was inspected and this contained an original cast iron fire surround; others are thought to survive elsewhere in the building. Two of the flats to the rear of the building, formerly the dining room and lecture room, have large skylights which are also original.

HISTORY: Pressure to introduce formal training for nurses began in the early C19. German reformer Theodore Fliedner established the Kaiserwerth Institute in Düsseldorf in 1833 and it was here that Florence Nightingale later trained. In London, Elizabeth Fry founded an Institute of Nursing to provide trained matrons to guard women incarcerated in Newgate Prison. The celebrity of Florence Nightingale during the Crimean War resulted in public donations to a fund dedicated to training nurses. From the mid-late C19 a small number of hospitals established training programmes, the London Hospital doing so in 1880. But it was under Matron Eva Lückes that the London moved into the vanguard when, in 1896, she established a pioneering seven-week preliminary course comprising lectures, practical work and, distinctively, an examination at the end. Twenty-eight probationers were admitted at a time to Tredegar House, a Georgian house on Bow Road, donated to the hospital by Lord Tredegar. Nurses were taught anatomy, physiology, bacteriology and hygiene and shown how to read temperatures, bandage, keep reports of special cases and other nursing skills. More basic housekeeping was also included because, as Lückes observed, 'unfortunately, a knowledge of [such duties] does not come by instinct to every woman, as is sometimes imagined'. The course allowed probationers to 'pause on the threshold' before deciding whether to enter the wards and ensured the hospital had dedicated, competent staff. Edith Cavell took the course in 1901. Through schemes such as this one, the professionalism of nursing was advanced and standards on wards improved. In turn, the training of nurses provided a good income for hospitals as trainee nurses spent a year caring for paying invalids, whose fees went to the hospital; by 1905, the London Hospital training programme for nurses was making around £1,700 per year profit. In 1911, the decision was taken to rebuild Tredegar House and plans were drawn up. Rowland Plumbe, the Hospital Surveyor, himself contributed £5000 to the cost of building work, amongst other donors. The original plans of February 1911 survive and show the original building had a lecture room, dining room, sitting room and large 'practical classroom' for the pupil probationers along with bedrooms for 30 probationers and bed-sitting rooms for the sisters. The principal rooms had parquet flooring, picture rails and cornices which may still survive. The rebuilt Tredegar House was opened by H M Queen Alexandra in July 1912.

REASONS FOR DESIGNATION: Tredegar House is listed at Grade II for the following principal reasons:
* special historic interest as a purpose-built training home for nurses undertaking a pioneering seven-week course founded by the London Hospital's Matron Eva Lückes;
* architectural quality of the building in dignified Wrenaissance style with good quality craftsmanship and materials and well-surviving elevations, forecourt gates and railings and parts of the interior;
* by notable architect and London Hospital Surveyor, Rowland Plumbe.

Tredegar House is designated at Grade II for the following principal reasons:

* special historic interest as a purpose-built training home for nurses undertaking a pioneering seven-week course founded by the London Hospital's Matron Eva Lückes;
* architectural quality of the building in dignified Wrenaissance style with good quality craftsmanship and materials and well-surviving elevations, forecourt gates and railings and parts of the interior;
* by notable architect and London Hospital Surveyor, Rowland Plumbe.