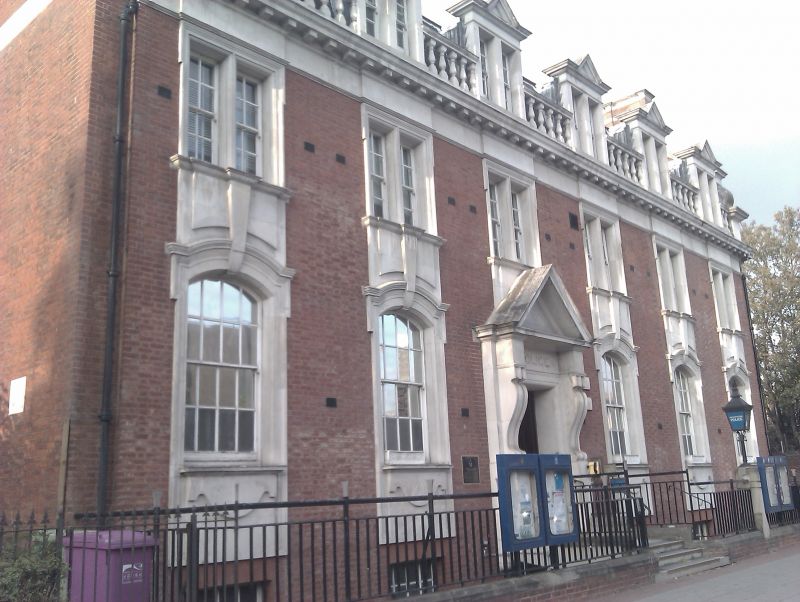 STATION EXTERIOR: A red brick building in the Neo-Baroque style with stone dressings, slate roof and tall brick chimneys. It has a handsome six window bay façade to Bow Road of two storeys plus a tall mansard attic with a stone balustrade between the prominent mullioned, pedimented dormers. The verticality is emphasised by the stone window surrounds which extend across the full-height of the elevation to abut the façade's plain frieze and dentil cornice. The windows have lugged architraves, those to the ground floor with elongated keystones which bisect their segmental pediments and link to the shaped aprons of the first floor mullions. The regularity of the elevation is only interrupted by the off-centre stone porch with Dixon-Butler's characteristic triangular pediment and elongated swelling brackets. Its lintel is inscribed '.POLICE.' and there is a date stone on the left-hand plinth. The front door and window joinery is original as are the iron railings and return boundary wall. The ebullient stone detailing is carried over on the return to Addington Road. This has a stone-coped round-arched gable with stone volutes, two further windows with segmental-headed surrounds and two oriels with stone mullions. The chimneys have stone banding. A second gable with volutes enlivens the otherwise blind return to the west, which abuts the neighbouring listed late Georgian terrace. To the rear are ranges of varying heights, their fenestration functionally determined, but with the same good quality brickwork that distinguishes the façade, attractive brick arches to the windows and some stone dressings. There is a cell block with small windows set high up in the wall, most with the original cast iron glazing bars, three replaced in glass blocks.

INTERIOR: The reception area has been refurbished but a vestibule door survives along with a quarry tile floor in the lobby. The external walls retain their exposed arches, designed to strengthen the construction, but there are no fireplaces. A good number of original panelled doors survive as does the staircase with its iron balustrade and handrail. The basement lavatory block retains its white glazed brick walls. The cell block survives largely unaltered. The cells retain their doors with shuttered apertures for monitoring prisoners and inside there are solid half-height partitions indicating where there were once WCs. There are eight individual cells and one larger communal cell, this with a separate ablutions closet.

STABLES & MARRIED ACCOMMODATION: Further along Addington Road is a separate stable block. The style is pure Moderne in white concrete with the curved corners, horizontal windows and flat roofs characteristic of that style. The building is U-shaped at ground floor with a stable to the rear and two projecting wings containing further stables, tack rooms and other functional spaces. In between the two wings is a central yard with a concrete canopy overhead. The stable is skylit and retains its original stall partitions and floor surfaces. There is also a tall chimney, which originally served the forge. The upper floor, stepped back from the ground floor, comprises two flats for married police officers and is reached by flights of steps, one at each end of the building's frontage. The plan is clever, ensuring that the different and unrelated functions of stabling horses and accommodating married police officers and their families are kept separate, with individual entrances from the street. The metal windows to the flats have been replaced by plastic frames but those to the stable section survive. There are no original features in the flats. The boundary wall, also in white concrete, is original but the gates are modern.

HISTORY: Bow Road Police Station superseded a station of 1854 by Charles Reeves, which survives nearby and is listed at Grade II. The station originally housed one married inspector, one married constable (and, presumably, their families) and forty unmarried constables. Further accommodation was provided at a section house on Violet Street, Bow. In 1880, Bow was made the principal station of the Division until re-organisation in 1933. In 1938, the station became the location for the divisional stables and accommodation was built for twenty horses to designs by Gilbert Mackenzie Trench, Dixon Butler's successor as Surveyor. Further accommodation was also provided at that time for married officers.

Dixon Butler, a Fellow of the Royal Institute of British Architects, succeeded his father, John Butler, to this post in 1895 and served as surveyor until his death in 1920 by which time he had designed over 200 police stations and courts. His period as surveyor is also notable for the architectural quality of his designs. Dixon Butler stations are usually in a domestic style, sensitive to the context of the areas in which they were located, with strong municipal qualities such as handsome iron railings, inscribed lintels identifying the building as a police station, and other stone dressings. Surviving stations illustrate his proficiency across a range of different sites as the Metropolitan Police's jurisdiction was over a much wider area than comparable public service authorities, such as the London County Council, encompassing Middlesex and sections of other home counties. With this prolificacy came the opportunity to experiment with plan and elevational treatment and it is no surprise, therefore, that some of the most characterful and distinctive buildings in the Metropolitan Police estate are those by John Dixon Butler. In a wider context too, Dixon Butler's police stations are noted as important components of early C20 townscapes which sit well alongside contemporary municipal buildings, and contribute to the high regard in which Edwardian civic architecture is held.

The Metropolitan Police Force Surveyorship was established in 1842, thirteen years after Sir Robert Peel's Metropolitan Police Act of 1829. From the first purpose-built police station in 1831, at Bow Street, new stations were built throughout the C19, particularly in the late 1880s following the political unrest of that decade and high-profile events such as the Whitechapel Murders. Victorian police stations were hence built in prominent positions with easy access from the street, in order to advertise the presence of the police to a concerned public. Design often responded to political and social concerns, in the 1880s, for example, following a diphtheria case in Rotherhithe police station, the separate accommodation of police officers and prisoners was recommended. This was then overturned in the 1890s after a volatile police demonstration at Bow Street after which it was thought wise to house constables within the stations, and hence under the supervision of on-duty officers. By the time of Dixon Butler's surveyorship a formula had been established: stations were designed with a mixture of police accommodation and cells; separate access for the police, prisoners and public was provided; and thought was given to the well-being of prisoners. One such occupant of Bow Road Police Station was the women's suffrage campaigner and socialist Sylvia Pankhurst, who was arrested and held here for smashing windows in February 1913.

REASONS FOR DESIGNATION: Bow Road Police Station is designated at Grade II for the following principal reasons:
* one of the finest stations in East London by John Dixon Butler, the most accomplished of the Metropolitan Police Surveyors;
* the stately Baroque façade, ebullient stone dressings and the quality of the craftsmanship distinguish this from contemporary stations;
* well-preserved cell block which once housed Sylvia Pankhurst;
* group association with the nearby station of 1854 by an earlier surveyor, Charles Reeves;
* the stables to the rear have special interest in their own right for their pure Modern style by interwar police surveyor Gilbert Mackenzie Trench.

Bow Road Police Station is designated at Grade II for the following principal reasons:
* one of the finest stations in East London by John Dixon Butler, the most accomplished of the Metropolitan Police Surveyors;
* the stately Baroque façade, ebullient stone dressings and the quality of the craftsmanship distinguish this from contemporary stations;
* well-preserved cell block which once housed Sylvia Pankhurst;
* group association with the nearby station of 1854 by an earlier surveyor, Charles Reeves;
* the stables to the rear have special interest in their own right for their pure Moderne style by interwar police surveyor Gilbert Mackenzie Trench.