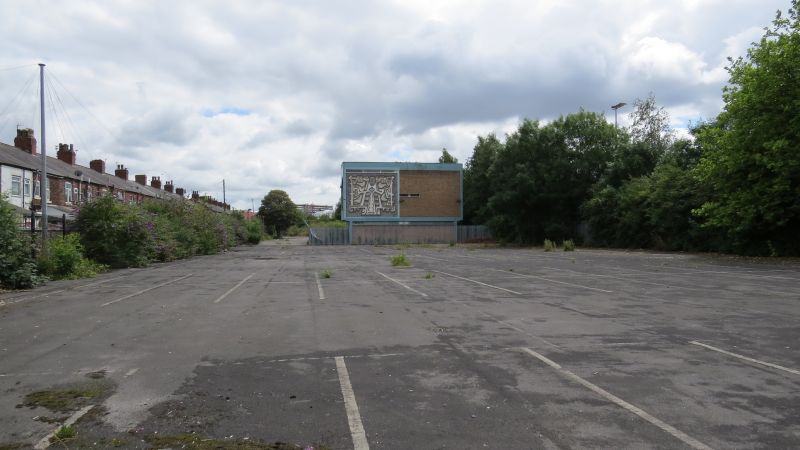 II
Relief mural depicting a stylised 'Tree of Knowledge', 1962, by Alan Boyson, ceramic and concrete with red tiles and pebbles, approximately 7m by 7m. Located on north end wall of former Cromwell Secondary School, which is not of special interest.

DESCRIPTION: Mural is fixed on to blockwork set within a concrete frame. Materials set into mortar covering the blockwork. Background consists of dark blue and red ceramic fragments. 6" deep and 3" wide black concrete ribs outline the tree and its interior features, ribs are cast straight on to metal mesh screwed to the blockwork. Tree is depicted in light coloured ceramic fragments with the tree trunk outlined in red tile fragments, large smooth pebbles are incorporated into the branches. Six irregular hexagonal motifs flank the tree trunk, which contain circular geometrical-patterned designs representing flowers in blue and light coloured ceramics, further similarly styled motif above trunk to centre. Two birds sit in the tree to each side; those to the upper part are positioned horizontally and face to the right (west), those to the lower part are positioned vertically with their heads pointing downwards. Stylised owl of wisdom set to the centre top of the tree with a striped body and large eyes, all with incised decoration and tin glaze.

HISTORY: Cromwell Secondary School for Girls opened in 1962. The school was designed by Cruickshank & Seward of Manchester, and constructed by W. Fearnley & Sons. The architects commissioned the artist, Alan Boyson (b.1930), to produce a mural for the exterior of the school and a ceramic tiled wall for the entrance hall, at a cost of £400. The ceramic tiles have since been lost. Included in the mural design were water-worn pebbles from Ice-Age deposits and historic ceramic fragments that were found on the site prior to the school's construction. The school later changed names and eventually became part of Salford University, which moved out in c.2008.

Alan Boyson trained at the Manchester Regional School of Art from 1950-4 under the ceramicist Lester Campion, and subsequently at the Royal College of Art from 1954-7 under the tutorage of Robert Baker, Professor of Ceramics. After his studies, Boyson lectured in the Ceramics Department at Wolverhampton School of Art in c.1959-61, and whilst there, he established his own studio and began to produce studio work and small commissions. The Cromwell School work was the first of many large commissions for Boyson, who worked all over the country. It is not known how many of Boyson's works survive, but some of his works included the 'Three Ships' mural on the former Co-operative building, Hull (locally listed); a ceramic tiled wall and two concrete screens at another school in Salford; a ceramic memorial at the Birmingham Oratory; a sculptured aluminium banking hall ceiling at the Bank of England, Leeds; stainless steel piece in the NatWest Tower, London (late 1970s); a glass screen and decorative ceiling in the Halifax Building Society HQ, Halifax (1970s). It is known that two of Boyson's works survive in listed buildings: an abstract Art Deco-style memorial window in the grade II listed St Ann's Church, Manchester, and a decorative concrete mural in the grade II listed Co-operative Insurance Society (CIS) Building, Manchester. Alan Boyson is an Associate of the Royal College of Art (ARCA) and continued producing large-scale and small-scale works until c.1999 and c.2004 respectively.

REASONS FOR DESIGNATION: The mural at the former Cromwell Secondary School is designated at grade II for the following principal reasons:

* It has a high level of aesthetic and artistic quality represented in a bold and striking composition depicting a stylised and symbolic tree of knowledge with songbirds, flowers, and an owl of wisdom
* Its clever use of colour, incised decoration, textures and mixed media, including ceramics, concrete, tiles, and pebbles, combine to produce a highly distinctive and impressive work of art
* It is a rare surviving example of a bespoke 1960s ceramic mural, which was produced by the successful and prolific artist, Alan Boyson
* It is a good example of the integration between art and architecture, and the 1950s/60s policy of enhancing communities through the incorporation of art work in the public realm