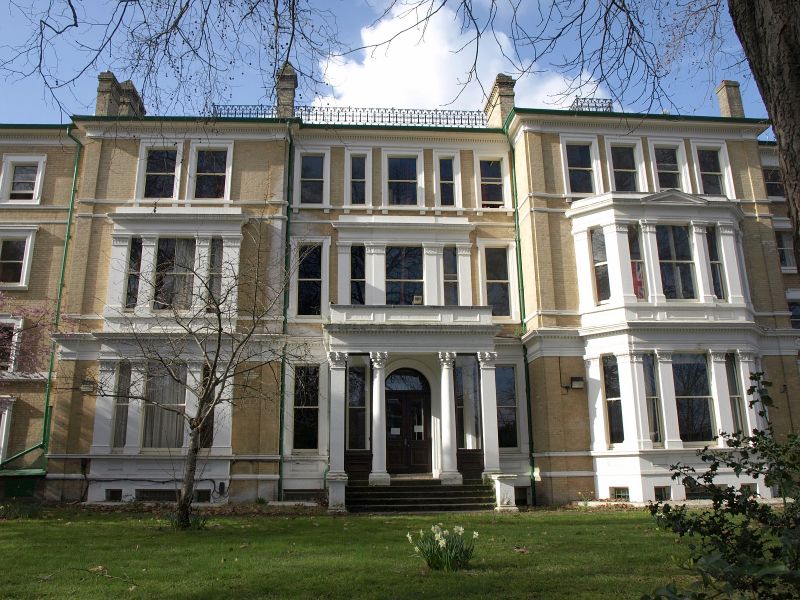 II
House, now part of student halls of residence. Built 1882 for for George Egmont Bieber, a City merchant, architect unknown. Wings added to N and S 1923-25 (these additions are not of special interest).

PLAN: Comprises a large entrance hall on E side with large open well stair to rear, around which is a former morning room to S; a long ballroom, a large and a small drawing room to W, and a dining room to the N. On W side of drawing rooms, linked through double doors, is a large single-storey conservatory (the Winter Garden). Secondary stair to N of entrance hall. Upper-floor rooms accessed from central gallery around stair well.

The stables and coach house to the N of The Platanes are not of special interest.

HISTORY: The Platanes (the name derives from the German name for plane tree), was built in 1882 for George Egmont Bieber, a City merchant and member of the German community that had grown in the Champion Hill area of Camberwell, part of the Dulwich Estate, a fashionable London suburb. The house was purchased in 1890 by the banker Herman Kleinwort of the German banking family. Soon after however, the social status of Champion Hill and its environs declined as the open fields were developed with smaller houses for lower-middle-class migrants to the suburbs. The Kleinwort family moved to Belgravia in 1908; after failing to find a buyer for the Platanes, and having been refused permission by the Dulwich Estate governors to change its use into a hotel or nursing home, Kleinwort donated the property to King's College Hospital in 1910. It became a student hall of residence for the hospital's medical school in 1913 and from 1923 for King's College. Wings were added on the N and S sides 1923-25. After World War II the grounds of the Platanes were amalgamated with those of another large house to the south, Danehurst, which also became a hall of residence; the latter was demolished in the 1970s.

REASONS FOR DESIGNATION: The Platanes is designated at Grade II, for the following principal reasons:
* Special architectural interest: principally for the extent and completeness of the late-C19 interior decorative schemes, and wealth of fixtures and fittings
* Rarity: as a large upper-middle class suburban mansion with virtually intact interior

The Platanes has been designated at Grade II, for the following principal reasons:
* Special architectural interest: principally for the extent and completeness of the late-C19 interior decorative schemes, and wealth of fixtures and fittings
* Rarity: as a large upper-middle class suburban mansion with virtually intact interior