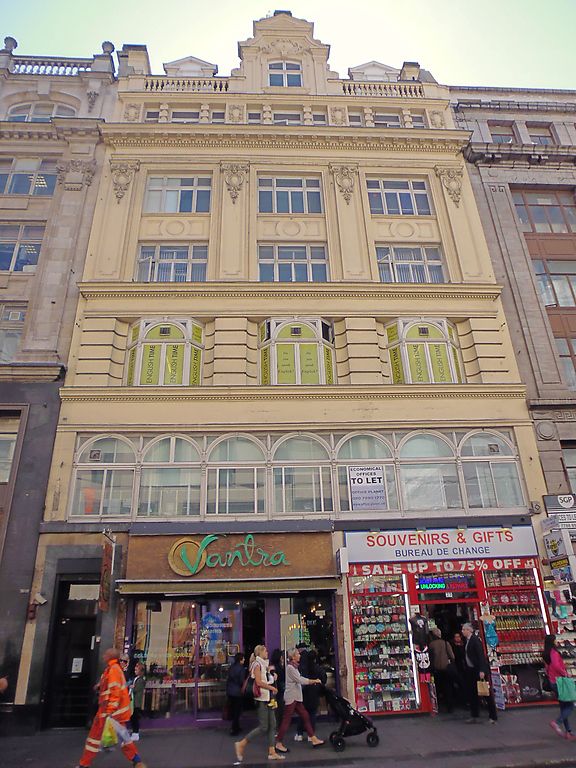 GV II
Shop with offices above. 1909 for Richards and Co, jewellers. Minor later alterations, including modern glazing and interior refurbishments at ground and first floor level which are not of special interest.

EXTERIOR: Only one elevation is visible from the street, that to Oxford Street, which is expensively-faced in white and peppermint-green faience. The architectural style is Flemish Mannerist, although the striped, sun-burst pattern created through the use of contrasting bands of faience hints at the Art Nouveau. The single-bay frontage has five storeys plus a basement: the ground floor a wide shop front opening with modern glazing; the second floor also a display window, again with modern glazing; the second and third floors contain a two-storey canted bay set into an arched recess, the shape of which, flaring at the top corners, is also quite Art Nouveau in style; the final storey has a tripartite window with quoined mullions; the elevation terminates in an elaborately ornamented gable containing a blind oeil-de-beouf surrounded by scrolls and palm leafs, flanked by two urns. The decoration is not limited to the gable: there are small urns resting on the elaborate consoles on the first floor; flanking the canted bay are cherubs heads and wings and fruit garlands; and the final storey has panels of peppermint faience and cartouches; the chimney is in bands of coloured faience too. Even the basic architectural details are highly ornamental, such as the cornices, keystone above the arched recess, and the consoles on the canted bay.

INTERIOR: The basement, ground floor and first floor are entirely modern and are likely to have been refurbished many times over since the Edwardian period. Above this, however, the arrangement of rooms is largely original and two fireplaces and the staircase survive. The latter has square newel posts and moulded balustrade with square block details which mirror the quoined mullions of the final storey window. The fireplaces are typical Edwardian designs with Adam-style neo-classical surrounds, cast iron grates and tiled reveals; they are in the front rooms of the third and fourth floors. The window fixtures, picture rails, cornices and skirting boards survive on all the upper floors, but most of the doors have been replaced.

HISTORY: Unusually for this street, 35 Oxford Street occupies the same narrow plot of earlier buildings on the site. Multiple plots were often bought up and redeveloped in this period and the preservation of the historic frontage width is almost as rare on Oxford Street as the survival of an original C18 building. The shop was built for the jewellers, Richards and Co, who were occupants from 1910 along with Max Lilley, hairdresser; the jewellers are likely to have had the ground floor shop and the hairdressers the first floor. In 1915, the building was occupied by Richards and Co and a new hairdresser, a Mrs Eliza Purchase, and a Henry Emmanuel Levy & Co, manufacturers' agents, who probably rented office space in the upper floors.

REASONS FOR DESIGNATION: 35 Oxford Street is listed at Grade II for the following principal reasons:
* notable use of materials, in the contrasting bands of peppermint and cream coloured faience;
* fully expressed Flemish Mannerist style, with plentiful ornamentation and quirks such as the keystone which breaks the dentil cornice and the quioned mullions;
* the building is characteristic of the best of Edwardian commercial architecture, is on one of the principal shopping streets in the country and has group value with other listed shops nearby.