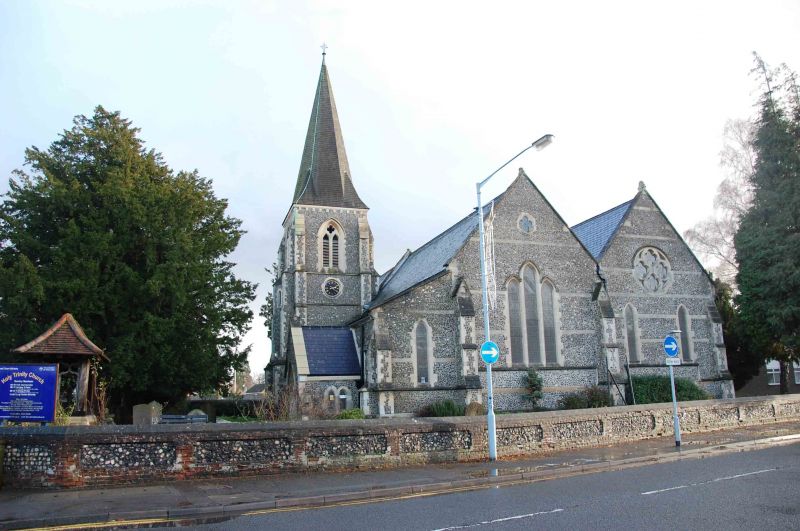 SUBSIDIARY FEATURES: Section of original boundary wall to west of churchyard, facing The Ring: red brick with flint panels and stone copings. Lychgate to north-west of church: constructed of heavy oak beams resting upon brick and stone dwarf walls, with timber traceried side panels and a hipped tiled roof with sprocketed eaves; moved to its present location during the 1970s.

HISTORY: Bracknell, a tiny hamlet before the C19, had by 1850 developed into a sizeable village, and was expected to expand yet further with the projected opening of a station on the Staines and Wokingham Railway. In anticipation of this, a new parish church was built in the High Street to supplement the ancient churches of Binfield, Winkfield, Warfield and Easthampstead, all some miles away. The church, consisting of nave, north aisle, south transept, tower and chancel, was designed by the architects HE Coe and EW Goodwin of Sydenham, and was consecrated in 1851. Around 1860, the church was extended by the addition of a broad south aisle, south chapel and north porch, with Coe again as the architect. Later still, a small vestry was built onto the base of the tower. Subsequent changes were restricted to the installation of fixtures and fittings: the present seating and organ were installed in 1910, and a number of stained glass windows by various designers were introduced as individual memorials and bequests.

In 1949 Bracknell was designated as one of the ten New Towns mandated by the New Towns Act of 1946, and over the ensuing decades almost all of the older settlement was demolished by the Bracknell Development Corporation to make way for a pedestrianised town centre surrounded by an inner ring road. The church, now cut off from the shopping area by the ring road, was one of the few older buildings to survive.

Henry Edward Coe (1826-1885) trained in the offices of George Gilbert Scott and GE Street before setting up in practice with EW Goodwin in 1849. Holy Trinity Church was one of their first commissions; others included the Dundee Royal Infirmary (1852, Category A) and Christ Church in Redcar, North Yorkshire (1854, Grade II). Coe entered into partnership with several other architects in the course of his career. With HH Hofland he won the initial competition for the Foreign Office in 1856, only to be edged out two years later by his former master GG Scott, and with Frederick Peck he designed the Agricultural Hall at Islington in 1862 (now the Business Design Centre, Grade II). In 1885, the year of his death, the National Agricultural Hall in West Kensington (now part of the Kensington Olympia, Grade II) was built to his designs.

REASONS FOR DESIGNATION: Holy Trinity Church is designated at Grade II for the following principal reasons:
* It is an attractive and well-preserved parish church of 1851, built in anticipation of the rapid growth of Bracknell during the mid-C19.
* It contains a suite of good early-C20 fittings, as well as a number of stained-glass windows by leading designers.