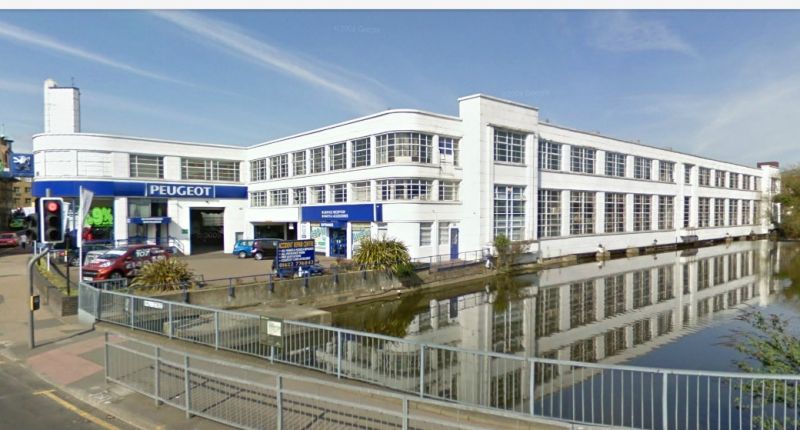 PLAN: Irregular L-shape plan with showroom, offices (now snooker club) and car storage to the west facing onto Mill Street (this block is known as Len House), and workshops and administration block to the east, facing on to Len Pond. The east block is set back from Mill Road creating a courtyard space where an island filling station was originally located.

EXTERIOR: Moderne style west block (Len House) is built over two stories with a flat roof and parapet (now capped in folded metal sheet) to the front and a saw-tooth roof with corrugated covering to the rear. Ground floor double height showroom frontage with polished black stone stall-riser and integral fascia band, now covered by modern signage. A horizontal band of windows at first floor is interrupted by a central triangular tower, which rises from a canopy over the main showroom entrance. A string course connects the heads and sills of the windows. To the north, a single bay provides access from the street to the first floor through a pair of panelled timber doors. Over the door on a simple square-edged door surround applied lettering spells the name 'LEN HOUSE' above which is a band of horizontal reeding. At first floor a single window is surrounded by a square-edged architrave with an expressed keystone and reeded sill. The Mill Street elevation curves round into the south elevation of the block which provides a secondary canopied entrance to the showroom and a vehicular access to the car store to the rear of the block. The east block is over two floors but a mezzanine level at the west end results in two rows of upper windows on the west elevation. As with the west block, these horizontal bands of windows have a string course connecting their heads and sills. The west elevation provides access to the administration block with a canopy over the door, and a vehicular access into the workshops behind. The west elevation curves round into the south elevation. At either end the south elevation is punctuated by a projecting bay with raised parapet and pierced balconette in front of the ground floor window. Between the projecting bays are five bays with a continuous string course at the window heads and sills, either side of a central bay with a pronounced architrave and pierced balconette. To the far west of this elevation is an original entrance door into the administration block. The east elevation has been rendered and the fenestration largely blocked or altered and a new central entrance and canopy installed. The north elevation is of untreated brick with concrete banding at first floor and roof level. Most of the original openings remain although there has been some alteration. This elevation is of lesser interest. The roof of the east block is flat to the south, with ridge and furrow covered in corrugated sheeting to the north. The ridges are mounted by extractor units.

INTERIOR The showroom has a modern interior, generally of little architectural interest, although a curved mezzanine viewing gallery (now enclosed) remains in the south-east corner of the showroom. The former offices on the first floor, now snooker hall, have been fitted with a Victorian-style interior, not of special interest. The car storage area to the rear of the showroom is largely open in plan, and fully open to the roof. At ground floor and mezzanine level the administration block is partially open-plan and partially subdivided into small offices with non-structural partitioning. The workshops are largely open plan with the vehicular ramp between ground and first floor being a principal feature. The concrete and steel structure of the building is undisguised; at ground floor concrete cross beams rest on large columns, supporting the first floor above, at first floor the workshops are open to the roof. The far east of the block is separated-off with a modern office interior, not of special interest. A number of original staircases remain throughout the building, mainly characterised by curved steel-strip balusters with wood or metal hand rails.

HISTORY: The Rootes motorcar showroom and workshop was built in 1937-38 for Rootes Ltd by Howard and Souster, an architectural firm who specialised in industrial and commercial buildings and who undertook a number of commissions for Rootes. The site, adjacent to a mill pond on the River Len, had formerly been occupied by a tannery. The tannery buildings were acquired by Rootes in 1917 and were later demolished to make way for the new complex of showroom, filling station, workshops and offices. At the time of its opening in April 1938, the showroom was considered the largest and most up to date in Kent; at night 700ft of neon tubing outlined the frontage and spelled out the name 'ROOTES' on the tower above the main entrance.

Rootes was started in 1895 by William Rootes Snr who opened a cycle and repair shop in Goudhurst, Kent. The business soon moved into motor cars and its growing success took him to new larger premises in Hawkhurst and then Maidstone, where his son William was placed in charge. In 1917 William was demobilised from the Royal Naval Volunteer Reserve to start the first aero engine repair organisation in the country. It was at this point that the old tannery, adjacent to the Len mill pond in Mill Street was obtained by the Rootes firm. Previously operating as a private firm, Rootes became Rootes Ltd, The Len Engineering Works, Maidstone; formed for the purpose of overhauling and repairing aero engines for the government.

By the mid 1920s, Rootes had become Britain's largest motor retailer and had moved into coach-building, acquiring in 1925 the firm of Thrupp and Maberly, coach builders for Humber, Daimler and Rolls Royce. In the late 1920s, Rootes Ltd moved into car manufacture, forming Rootes Securities and making a successful bid for Humber-Hillman-Commer. The Hillman Minx, launched in 1931 became an outstanding success and by the late 1930s was the most popular light car in the world. In the mid 1930s the famous names of Sunbeam, Clement Talbot and Karrier all became part of the Rootes family. By 1937, Rootes controlled eight manufacturing companies, seven distributing companies, and was also controlling one of the largest export businesses in the British motor industry.

By the late 1930s manufacturing had moved away from the Maidstone site so the Len Engineering Works was rebuilt as a model super service station. In the preceding years, the motor car had become more accessible to the middle classes; the new showroom on Mill Street prided itself on offering 'models for the masses and millionaires'. The motor industry had embraced modernism in its architecture during the 1930s; the opportunities to exploit new materials and technologies allowed for an architectural expression linked to both the ideals of the motor industry, and the aspirations of their customers. The size of the Rootes showroom floor, uninterrupted by supporting columns, combined with an elegant, streamlined exterior glowing with neon light, would have made an impressive sight. The Rootes complex was referred to as a 'palace of modern motoring'.

The post war years saw continued national and international success for Rootes but the 1960s brought change. In financial difficulty, aid came from Chrysler who eventually acquired a majority share and the company became Chrysler United Kingdom. When Chrysler pulled out of Britain, ownership of the Rootes showroom and workshops passed to the Peugeot-Talbot Motor Company. The site is now owned by Robins and Day Ltd and continues to operate as a car showroom and repair garage.

REASONS FOR DESIGNATION
The Rootes car showroom and workshops, Mill Street, Maidstone, is listed at Grade II for the following principal reasons:
* the building is of special architectural interest as an example of a Modernist motorcar showroom, office and workshops complex which retains a significant proportion of its original fabric.
* the building is of special architectural interest due to its grand scale, town-centre location and picturesque setting adjacent to the Len mill pond, which distinguishes it from other buildings associated with the motorcar industry during this phase of early motoring.
* the building is a prominent manifestation of a hugely successful British car manufacturer, built in a period when the expansion of car ownership was having a the revolutionary impact on the physical and social fabric of the nation.