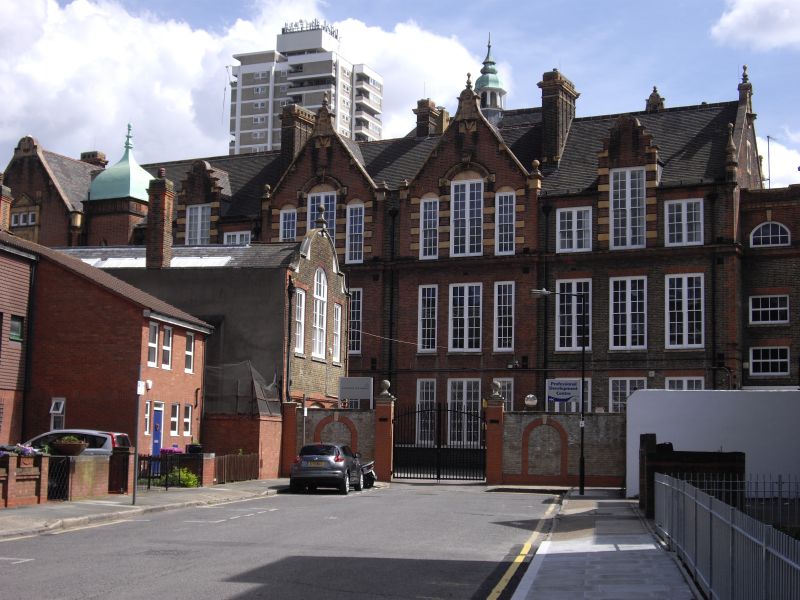 GV II
Two former board schools, one of 1874 by ER Robson, architect to the School Board for London with additions of 1904 (western school); and its replacement of 1904 by TJ Bailey (eastern school). Minor later alterations.

WESTERN SCHOOL: The 1874 building is constructed of stock brick with red brick dressings, pitched roofs of slate curbed by parapets, tall brick chimneys and white-painted wooden windows. The building was originally of two storeys in part, but floors have been removed inside; the external elevations nonetheless still read as a mixture of single and two storey components. The style is transitory: a residual Gothic with hints of Queen Anne, unsurprising given the period was the one in which London School Board architecture was crystallising into a recognisable house style, with Robson as board architect. The westernmost portion of the building has a two storey south front towards Ropery Street, the returns east and west with handsome exposed chimneybreasts at either end bisecting the gable ends. The single storey hall range runs back from this front block. A second range to the east runs parallel, this single storey with a small timber cupola and three windows in the end gable (this front section of the range is the later addition). A shorter block, set back from the street frontage, links the two long ranges; this has two storeys with a later opening at ground floor level to the front (this part is an addition of 1904), and a single storey behind. A further addition of 1904 is the single storey entrance lobby with two separate doors, presumably for girls and boys, to the west of the main block. On the wall near here, set at the base of western chimneybreast, is a remarkable stone relief plaque of Knowledge Vanquishing Ignorance; this is original to the first phase in the building's history.

INTERIOR: The building has been stripped back to its brick shell and the floors removed and so few internal features, for example parquet floors or staircases, survive. There are surviving elements of interest, however, which include: a small number of panelled timber doors; a glazed brick lobby; the exposed timber roof trusses in the hall (a king post) and the eastern two classrooms (with scissor trusses); and a single fireplace. The plan is also of interest for its contrast with the later forms adopted in board schools. Rather than have a central hall, this building is much more traditional in layout, similar to the 'monitor system' schools of the earlier part of the C19, where a single teacher supervised assistants in each classroom.

EASTERN SCHOOL: The neighbouring 1904 board school is a three-storey, stock brick building with red brick dressings and terracotta ornaments and copings. The roofs are tiled and there is an octagonal cupola of timber and copper at the centre. The windows are timber, painted white. The south (Ropery Street) front has a tall centre comprising three storeys of halls with large windows, these separated by piers with scrolled brackets above the first storey, rising to an ornamental broken parapet over the top storey, curbing the high hipped roof. To either side are the slender stair towers, with high shaped gables. These are flanked by slightly lower links and there is a gabled wing to the east; its counterpart to the west was never built. The north front has windows in triplets, terracotta banding along the top storey and gables. Its projecting eastern wing has a straight gable and terracotta cartouche inscribed 'South Grove School AD 1904'. The single stair tower here has a copper ogee domed roof. The east end (towards Southern Grove) has one straight gable in the centre; the west end is plainer, level with a parapet, presumably because it was intended to link to the second, un-built wing. There are separate entrances for Boys, Girls, and Infants, all with inscribed lettering in the lintels and original steps and iron railings. The inscribed lintel in the western elevation entrance has been covered.

INTERIOR: The standard plan comprising a central hall, with a single bank of classrooms down one side, and corridors leading to clusters of classrooms in the wings, is readable on each of the three-storeys. There has been some subdivision or opening up two of the halls and some of the classrooms. There are mezzanines between the floors overlooking the corridors; these were the former staff and head-teacher's rooms. In the attic the former drawing or science classrooms retain their timber roof trusses. There are hardwood block floors, glazed brick dados (mostly painted), and semi-circular glazed fanlights and internal windows in most corridors and classrooms; the upper floor corridors have skylights. There are four stairwells, each with russet glazed brick walls, metal balustrades to the upper flights and hardwood handrails lower down; the glazed brick in all but the upper sections of one of the stairs has been painted. There is a single fireplace surviving in one of the former staffrooms.

SUBSIDIARY FEATURES: A third block, probably originally a HANDICRAFT OR WOODWORK BLOCK with open arcades at ground floor (now infilled) and workshops above, is to the north of the 1904 school and is likely to be contemporary with it. It has shaped gable ends with stone kneelers and ball finials and a king post timber roof inside. There is a high brick WALL around the southern and eastern sides of site, with piers at regular intervals and the original wrought IRON GATES.

HISTORY: Unusually, the first school was not demolished when the second was completed, but served as a special school after 1904 instead. The buildings were known as South Grove School, after the street that runs alongside the eastern boundary (now called Southern Grove). This is remembered in the plaque affixed to the school reading 'South Grove School 1904'.

The pioneering Elementary Education Act of 1870, steered through Parliament by William Forster and thus known as 'Forster's Act', was the first to establish a national, secular, non-charitable provision for the education of children aged 5-13. A driving force behind the new legislation was the need for a literate and numerate workforce to ensure that Britain remained at the forefront of manufacture and commerce. Moreover, the extension of the franchise to the urban working classes in the 1867 Reform Act also alerted politicians to the need to, in words attributed to the then Chancellor, 'educate our masters'. The Act required partially state-funded elementary schools to be established in areas where existing provision was inadequate, to be managed by elected school boards. The School Board of London was the first to be founded (in 1870), and the most influential. The Board was one of the first truly democratic elected bodies in Britain, with both women and members of the working classes on the board. It comprised 49 members under the chairmanship of the former Viceroy of India, Lord Lawrence, and included five members of parliament, eleven clergymen, the scientist Thomas Huxley, suffragists Emily Davies (an educationalist) and Elizabeth Garrett Anderson (a doctor), and a working-class cabinetmaker, Benjamin Lucraft. The Board's politics were ambitious and progressive, as epitomised by its passing of a by-law in 1871 compelling parents to send children to school; this was not compulsory nationally until 1880.

Such was the achievement of the London School Board in the last quarter of the C19, that by the Edwardian period few neighbourhoods in London were without a red brick, Queen Anne style, three-storey school designed by ER Robson, the Board's architect, or his successor TJ Bailey. The Board's adoption of the newly-fashionable Queen Anne style was a significant departure from the Gothic Revival deemed appropriate to educational buildings up until that point, and created a distinctive and highly influential board school aesthetic. Around 500 board schools were built in London, many in densely-populated, poor areas where they were (and often remain) the most striking buildings in their locales. The Board did not escape criticism, however, both on the grounds of expense to rate-payers and for potentially radicalising the urban poor through secular education. Yet its supporters were unapologetic, as the words of Charles Booth, justifying the expense of more elaborate schools in the East End, indicate: 'It was necessary to strike the eye and hold the imagination. It was worth much to carry high the flag of education, and this is what has been done. Each school stands up from its playground like a church in God's acre, ringing its bell'. Sherlock Holmes in Sir Arthur Conan Doyle's 'The Naval Treaty' (1894) also lauded the new metropolitan landmarks as 'Beacons of the future! Capsules with hundreds of bright little seeds in each, out of which will spring the wiser, better England of the future', thus epitomising the reformers' confidence in the power of universal education to transform society. The unpopularity of the board with ratepayers, however, led to its abolition in 1902 and responsibility for educating London's children fell to the London County Council. At first, they kept on TJ Bailey as architect and so schools continued to be built in the board school idiom. The striking design of many Board and LCC schools is thus illustrative of this special history.

SOURCES
SAVE Britain's Heritage, Beacons of Learning (1995)
Elain Harwood and Andrew Saint 'Report on Listing of London Board Schools' held at NMR (1991)
Timothy Walder, 'The evolution of the classic school design of the School Board for London (1870-1904): a reassessment of the role of Edward Robert Robson' (Institute of Education, University of London MA dissertation, 2006)
James Hall, 'The London Board Schools 1870-1904: Securing a Future for these Beacons of the Past' (University of Bath MSc. dissertation 2006-7)

REASONS FOR DESIGNATION: Both the eastern and western parts of the Professional Development Centre, formerly South Grove School, are listed at Grade II for the following principal reasons:
* one block is a fairly rare, early (1874) school by ER Robson, built in the period when no two London schools were the same, and as the Queen Anne style was emerging as the board's signature idiom;
* the chimney bears a handsome plaque depicting Knowledge Vanquishing Ignorance;
* the eastern school building (1904) is a fulsome expression of TJ Bailey's later style, and epitomises the 'sweetness and light' character of board schools architecture;
* the two former schools form a unique group, telling the history of London board school architecture at a glance.

Both parts of the Professional Development Centre, formerly South Grove School, are designated at Grade II for the following principal reasons:
* one block is a fairly rare, early (1874) school by ER Robson, built in the period when no two London schools were the same, and as the Queen Anne style was emerging as the board's signature idiom;
* the chimney bears a handsome plaque depicting Knowledge Vanquishing Ignorance;
* the main school building (1904) is a fulsome expression of TJ Bailey's later style, and epitomises the 'sweetness and light' character of board schools architecture;
* the two former schools form a unique group, telling the history of London board school architecture at a glance.