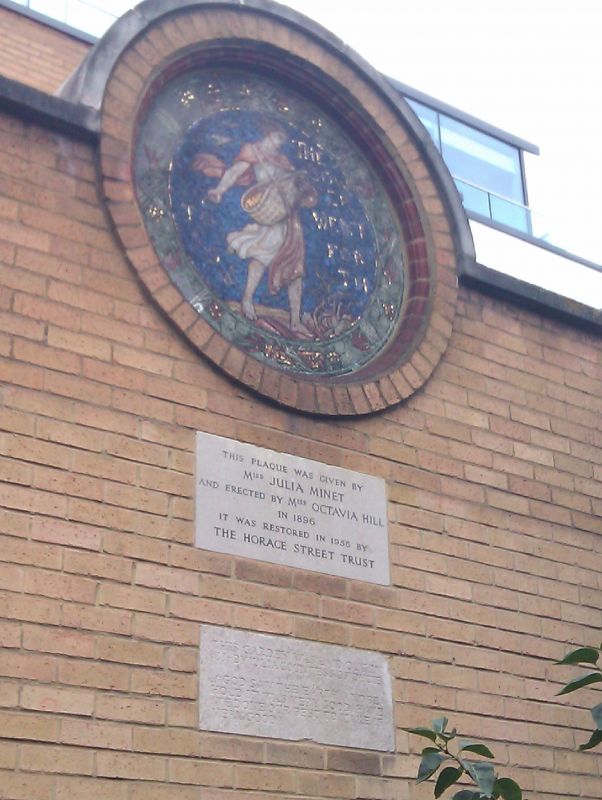 GV II
Mosaic roundel, 1896, set into the wall of a later building which lacks special interest.

ROUNDEL: The roundel is relatively large and is a mosaic with tesserae of coloured glass and gilt. It depicts the sower scattering seed on the ground with the words 'The sower went forth to sow' (a quote from Matthew, chapter 13, verse 3) picked out in gilt on the blue background. In the Pre-Raphaelite idiom of the day, the sower wears a tunic and medieval-style cape and carries a woven basket full of seeds. The maxim of the parable - that seed that falls on fertile ground will flourish, in contrast to that which lands elsewhere - is emphasised by the thorns in the ground (which choke the seed in the parable) and two birds in the background (which eat the seed that falls on stony ground). There is a border of flowers, vines, and ribbons on a green background, at the bottom of which is a small banner reading 'AD 1896'.

The roundel is set high into the wall of a 1950s building which lacks special interest, located next to Redcross Cottages (Grade II) and overlooking the Redcross Gardens.

HISTORY: The buildings and gardens at Ayres Street owe their existence to Octavia Hill (1838-1912) who chose the site for a garden (laid out by Julia, Countess of Ducie in 1887), a hall and twelve cottages (by Elijah Hoole, built 1887-1890). The hall was to be 'a kind of parish parlour' for the poor, and the garden to bring fresh air and beauty to 'the tired inhabitants of Southwark', at that time one of the poorest, most overcrowded parts of London. The homes were tenanted according to the principles Hill had established in Paradise Place, Marylebone, namely that people be housed in clean, well-ventilated buildings with rent collected weekly by quasi-social workers who saw that buildings were well-maintained and tenants, in particular their children, were content. Hill believed that the home and family, as opposed to the State, should be the essential providers of social stability and well-being, hence the cottages are in a small-scale, Arts-and-Crafts style. Like other social reformers of her time, she also held that art and beauty could transform working people's lives, and so in 1889 commissioned Walter Crane to decorate the interior of the hall with ten 'Deeds of heroism in the daily life of ordinary people', of which only three were executed and survive in the hall.

In the same vein, Julia Minet donated a mosaic roundel to the Redcross Gardens in 1896. The Minets were a public-spirited family of landlords, who funded a library, church and park - Myatt's Fields - for their own tenants in the Camberwell area. The roundel depictes 'The Sower' and was created by a glass-making firm, James Powell and Son, after a sketch of 1896 by Louisa Anne, Marchioness of Waterford. This was installed in the wall of a warehouse building that overlooked the garden's north-western corner. Since then, the mosaic has been re-sited in the wall of a 1950s building, in roughly the same position as originally. A second mosaic, 'The Good Shepherd' by Antonio Salviati, was introduced at the same time but has since been lost.

When it closed in the 1980s, James Powell & Sons were Britain's longest running glassware manufactory, having begun operations in London in the 1830s. The company's heyday was the late C19, when the burgeoning Arts and Crafts movement saw renewed interest in glassware, supplementing the demand for stained glass windows for churches throughout the C19. Powell & Sons were closely associated with leading Victorian architects and designers notably TG Jackson, Edward Burne Jones, William De Morgan and James Doyle and the firm also manufactured glass for William Morris's revolutionary Red House, designed by Phillip Webb. Under the grandson of the founder, Harry James Powell, the firm exhibited worldwide and was at the forefront of glassmaking design and technology. Powell, a follower of Ruskin, regularly lectured on glass and glass technology at industrial seminars. The firm's renown grew in the C20, producing designs embracing Art Nouveau, then Art Deco, and the business was one of those chosen to represent modern British industry at the Festival of Britain in 1951.

Louisa Anne, Marchioness of Waterford (1818-1891) was a watercolour painter and philanthropist. Brought up mostly in Paris, where her father was British Ambassador to the French court, she was taught to draw from an early age and art, along with religion and philanthropy, was one of her main interests throughout her life. She was a gifted amateur watercolorist, but did not exhibit at professional galleries until the 1870s. In the meantime, her strong interest in the welfare of the tenants on her Northumberland estate led her to rebuild the village of Ford, provide a school and found a temperance society. Her greatest artistic achievement was the decoration of the new school with life sized scenes from the Old and New Testaments, that used children and adults from the village as models. The school, now known as the Lady Waterford Hall, is listed Grade II*, while many of the other buildings sponsored by the Marchioness in Ford are Grade II. There is a religious dimension to many of Waterford's rural genre scenes; 'The Sower', which hints at the biblical parable of the same name, is one such example. The sketch was first exhibited in the Grosvenor Gallery, London in 1881 and is now in the Victoria and Albert Museum.

REASONS FOR DESIGNATION: The mosaic roundel at Octavia House, Ayres Street, Southwark is listed at Grade II for the following principal reasons:
* use of strong primary colours, the deliberately rudimentary character of the figure and lettering, and its didactic subject matter lend the roundel considerable aesthetic charm and quality;
* strong connections with figures in the model housing movement, from promient local landlords the Minets to nationally-renowned figures such as Octavia Hill and Louisa Anne, Marchioness of Waterford;
* the work of a renowned glassware manufacturer, Powell and Sons;
* in style and subject it epitomises the late-C19 progressive ideal that art had a social purpose;
* group value in this enclave of late-C19 housing and parish hall (all Grade II-listed), built to address the problems of cramped, unsanitary housing in Victorian London.

The mosaic roundel at Octavia House, Ayres Street, Southwark is designated for the following principal reasons:
* use of strong primary colours, the deliberately rudimentary character of the figure and lettering, and its didactic subject matter lend the roundel considerable aesthetic charm and quality;
* strong connections with figures in the model housing movement, from promient local landlords the Minets to nationally-renowned figures such as Octavia Hill and Louisa Anne, Marchioness of Waterford;
* the work of a renowned glassware manufacturer, Powell and Sons;
* in style and subject it epitomises the late-C19 progressive ideal that art had a social purpose;
* group value in this enclave of late-C19 housing and parish hall (all Grade II-listed), built to address the problems of cramped, unsanitary housing in Victorian London.