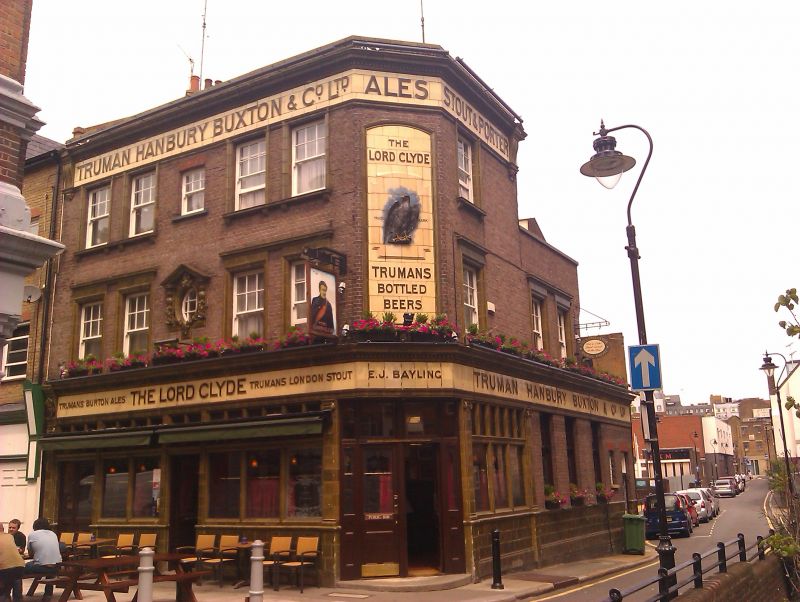 MATERIALS: Constructed of red-brown English-bond brickwork, the façades are dominated by the glazed green and cream earthernware tiles that adorn the entirety of the ground floor, but also run in a continuous band below the main cornice, and in the window surrounds, on the pub sign to the chamfered corner, and around the oeil-de-boeuf first-floor window on the Clennam Street elevation. All brickwork to the ground floor is clad in green tiles as are the window surrounds and architraves, with the exception of the northern three bays on Ayres Street where the tiles are only used up to stallriser height. The flat roof, over all levels, is concealed behind a parapet.

EXTERIOR: In addition to the tiling, windows dominate the ground floor. Above the approximately 1m high stallriser are a series of large single-pane, etched glass windows (many of which have been replaced), with a row of quarter-sized panels above along the entire Clennam Street elevation and first two bays of the Ayres Street elevation. A cream tile fascia runs above the ground-floor pub frontage with the words 'TRUMANS BURTON ALES THE LORD CLYDE TRUMANS LONDON STOUT E.J.BAYLING TRUMAN HANBURY BUXTON & CO LTD' highlighted in green tiles, under a heavy cornice.

On the upper floors, the sash windows are organized in pairs on each floor to Clennam Street and singly to Ayres Street, all in green tiled surrounds, most elaborately expressed in the oeil-de-boeuf. The tile band which runs below the cornice reads 'TRUMAN HANBURY BUXTON & CO LTD ALES STOUT & PORTER' highlighted in green tiles. A two-storey-high glazed tile plaque is mounted on the chamfered corner above the entrance at first and second storey levels. The cream tile background, surrounded by a green tile surround, bears the words 'THE / LORD CLYDE', under which is a raised relief of a black eagle with the words 'TRADE' and 'MARK' to either side and 'TRUMANS / BOTTLED / BEERS' below.

INTERIOR: Internally, there are two public rooms to the ground floor: one long and L-shaped, the other square, along with auxiliary rooms to the rear such as toilets and kitchen, both of which have been refurbished recently. Both the public rooms are panelled to dado-rail height. The bar and simple canopy, in similar wood to the panelling, are 'L' shaped, with a hatch for serving customers in the smaller room. There are original fireplaces in each bar, that to the main bar is decorated in glazed green tiles, matching the exterior. One of the original pub mirrors decorates the present-day bar. Two light-wells at ground floor level, light the rear corridor and kitchen and the main bar and ladies' toilets. The positioning of the blocked doorway and light-wells along with marks in the ceiling give some indication of the original layout. The basement has been altered since the pub was built but still contains a number of original panelled doors.

The upper storeys are given over to domestic accommodation, with a simple plan of four rooms per floor. All rooms, bar one, retain their original fireplaces, and some rooms retain picture-rails and gas lamp fittings. The stair has been encased with only the lower balusters being visible, these are of simple turned construction.

HISTORY: The Lord Clyde Public House was named after Field Marshall Colin Campbell Clyde (Lord Clyde) (1792-1863), a Scottish carpenter's son who joined the Army at 16 and rose to the rank of Commander in Chief. Educated at Glasgow High School and the Military Academy (Gosport) at the expense of his maternal uncle, an army Colonel called John Campbell, from whom Campbell adopted his surname, he fought many campaigns in the first half of the C19 and was raised to the peerage in 1858. Lord Clyde is buried in Westminster Abbey. The present-day pub sign shows Lord Clyde wearing the insignia of the Knight Commander of the Bath, an honour that he was awarded in 1849 for his services in the Sikh War.

The first Lord Clyde Public House was erected at the time of his death in 1863. The pub was rebuilt in 1913, and the present frontage dates from then, including the green and cream earthenware tiles. It was a new landlord, EJ Bayling, who undertook these works and he ensured his name appeared prominently beside that of the brewers, Truman's.

REASONS FOR DESIGNATION:
The Lord Clyde Public House, rebuilt in 1913, is designated at Grade II for the following principal reasons:
* Architecture: the well-detailed facades exemplify the development of 'house style' in public house architecture at the turn of the C20, all in an excellent state of preservation and forming a pleasing piece of townscape on a prominent corner site.
* Architectural detailing: the abundance of tile cladding, including the characterful lettering and the brewery's emblem, adds considerably to the building's otherwise typical corner pub composition.

The Lord Clyde Public House, rebuilt in 1913, is listed at Grade II for the following principal reasons:
* Architecture: the well-detailed facades exemplify the development of 'house style' in public house architecture at the turn of the C20, all in an excellent state of preservation and forming a pleasing piece of townscape on a prominent corner site.
* Architectural detailing: the abundance of tile cladding, including the characterful lettering and the brewery's emblem, adds considerably to the building's otherwise typical corner pub composition.