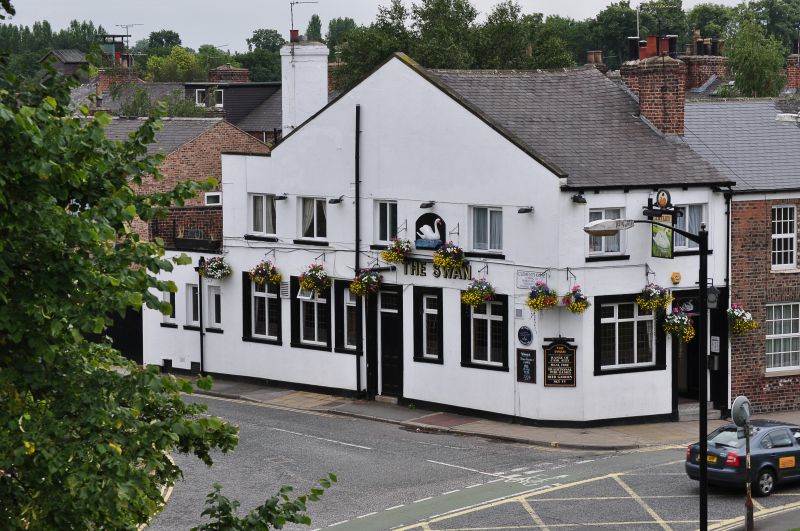 PLAN: Narrow street frontage to Bishopgate Street, with small lobby on south side opening into a corridor running the length of the building and widening out in front of the main counter of the central servery to form a 'drinking lobby'. Servery also has side hatches for the public bar to the front and smoke room to the rear of the building. Out-sales department behind servery with separate entrance on Clementhorpe. Staircase to first-floor accommodation, with steps to cellar beneath, at rear of corridor, with separate toilets for men and women beyond the smoke room.

HISTORY: The Swan is known to have been a beerhouse since 1861, although it was not until 1896 that trade directories identified the proprietor's main business as 'beer retailer (on)' rather than 'grocer' as previously. Joshua Tetley's, the largest of the pre-war West Riding brewers, acquired the pub in 1899. No plans have been found prior to the 30s alterations, but licensing records of 1902 indicate that it had a smoke room, dram shop, and bottle & jug department. Tetley's commissioned the partnership of Kitson, Parish, Ledgard & Pyman to undertake the majority of the company's architectural work between the Wars. The practice was founded in the mid-1920s and became a leading commercial practice in Leeds, responsible for some of the city's noted civic and commercial buildings of that period. They established a 'house style' for the company, making use of generously proportioned varnished joinery in their pub interiors, with clear, rectangular leaded lights in screenwork, windows and overlights. The Swan's present layout conforms to the architects' drawing for a proposed ground-floor plan dated 1936.

REASONS FOR DESIGNATION
The Swan Public House is designated at Grade II for the following principal reasons:
* It is a substantially intact example of a 1936 interior remodelling of a small C19 street-corner public house to designs by Leeds architects' practice Kitson, Parish, Ledgard & Pyman, who developed a distinctive inter-war 'house style' for Leeds' brewers Joshua Tetley & Son Ltd
* It retains a significant regional urban plan form, with a widened-out corridor in front of the servery forming a 'drinking lobby' for stand-up drinking
* There is a high level of survival of fixtures and fittings relating to the 1936 scheme including rectangular leaded lights, panelled doors, architraves, terrazzo flooring, hatches and leaded-glazed screenwork to the servery, fitted bench seating in public bar and smoke room, bell-pushes in the smoke room, urinals, and black and white tiling in the toilets.