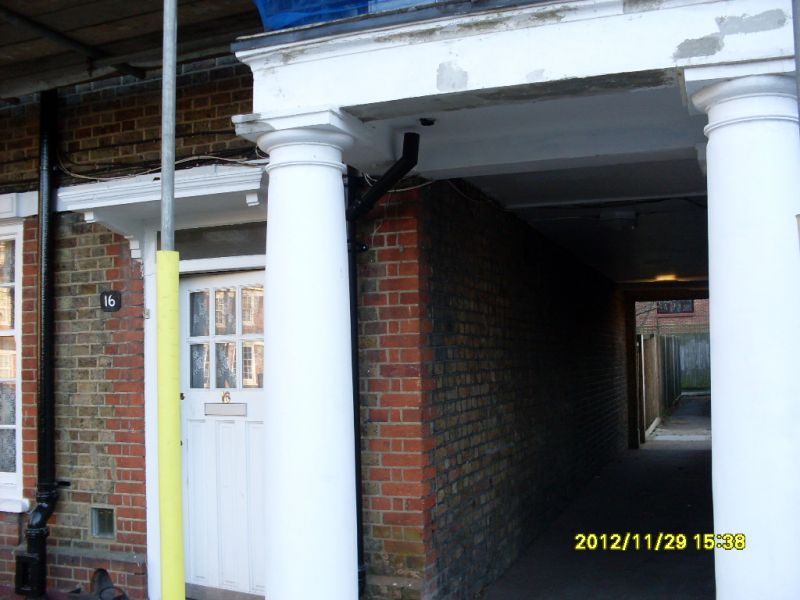 PLAN: Quadrangular in plan around a landscaped garden (now mostly taken up with car parking) with open entrance to the north-west, comprising some 30 two-storey houses with additional flats in the attic storey.

INTERIOR: Only two houses were inspected (2010); these retain their original plan of hall, front parlour, living room and rear kitchen with three bedrooms and a bathroom at the rear upstairs. Original doors, cupboards, fireplaces and tiled hall floor remain but this is likely to vary within individual houses. The original serviced cubicles on the attic floor have all been converted into flats. These are accessed by corridors from concrete stairs at the corners of the ranges.

HISTORY: Claude Grahame-White (1879-1959), a hugely influential figure in early aviation, began his interest in flying when he travelled to Reims in France in 1909 to attend the world's first aviation conference. He briefly worked in Louis Bleriot's aircraft factory while he learned to fly, and then opened a flying school in Pau. In April 1910 he returned to England and entered the Daily Mail sponsored inaugural flight from London to Manchester, an event that brought him and Hendon, where the race started, much public attention. In early 1911 he formed the Grahame-White Aviation Company based at Hendon. The company operated a flying school and built aircraft as well as pioneering air mail services and organising air displays, doing much to promote both aviation in this country and Hendon's pre-eminent position therein. On the outbreak of World War I, Grahame-White offered his own and his company's services to the government and the London Aerodrome, Hendon. His works were requisitioned by the Royal Naval Air Service while Grahame-White was commissioned as a Flight Commander. Initially limited to aircraft repair, in October 1914 the company was awarded its first wartime contract for production of the BE2c aircraft and began a huge expansion programme, reportedly employing 1,000 staff by August 1915, and resulting in the construction of a new factory on the Hendon site which opened in 1916. Further contracts followed for construction of the Avro 504 and DH6 aircraft and by the end of 1917, after further expansion, the factory site covered 50 acres. At the end of the war the company was seriously affected by the sudden cancellation of Air Ministry contracts. Grahame-White turned his factory to car and furniture production but was unable to regain control of the airfield and his involvement with the air industry came to a close after a long legal battle with the Air Ministry resulted in his sale of the aerodrome to them in 1926.

In April 1917, having trouble finding sufficient accommodation for his employees, Grahame-White gained approval from the Welfare Department of the Ministry of Munitions for a proposal for an ambitious housing scheme to the west of the aerodrome. This was never intended to be temporary war-time accommodation but looked forward to the expected growth of the civil aircraft industry once the war had ended, potential he outlined in his 1919 book, 'Our First Airways, their Organisation, Equipment, and Finance'. Designs by the company architect, Herbert Matthews, a fellow flying enthusiast, were drawn up in 1917 but it is unclear whether construction had started by the time the war ended. A prospectus for the scheme by the Grahame-White Estate Department outlines the three types of accommodation provided with three and four-bedroom houses let for between 19s 6d and 23s 6d per week. There were also serviced cubicles for temporary accommodation on the attic floor at 10s per week. Plans were published in The Building News in March 1919. This article shows the types of accommodation available and also has a perspective drawing of the whole development (the current Aeroville was part of a symmetrical design with additional housing blocks and a crescent linking it with its matching square) and of the proposed first-aid hospital. By now however, the company was in no position to proceed with the rest of the development in the climate of uncertainty over the future of Hendon following the end of the war, and the present square was the only part of Aeroville to be built. The building was eventually sold to the London Borough of Barnet.

REASONS FOR DESIGNATION
Aeroville, Hendon is designated at Grade II for the following principal reasons:
* Aviation interest: as one of the few remaining structures associated with the pioneering role that Hendon airfield and its owner and aircraft manufacturer and advocate, Claude Grahame-White, played in the development of aviation in Britain up to the end of World War I;
* Social history interest: as illustrative of the need for central government funded social housing for workers in armament industries that expanded massively due to the demands of World War I;
* Architectural quality: Aeroville has a high quality of design, in this case in the neo-Georgian style that came to predominate in inter-war social housing and is largely intact; the Doric colonnade, red brick dressings and apron and overall planning is of note. The cottage effect is strong despite later alterations.