Church of St Joan of Arc 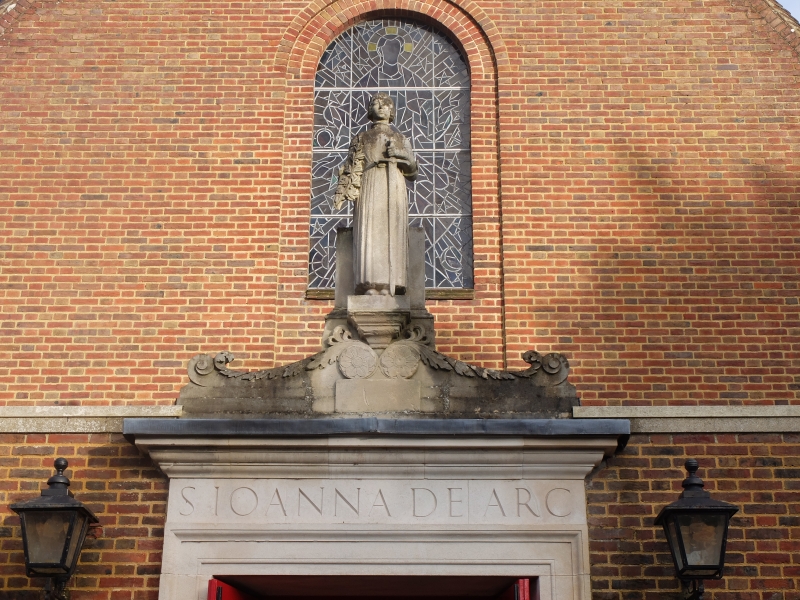 PLAN: Basilican plan, nave flanked by north and south passage aisles. Blessed Sacrament Chapel to east of north aisle, Chapel of St Catherine and St Margaret and Baptistry to the west of north and south aisles respectively. Narthex to west end and campanile to the south-east.

EXTERIOR: The church has a steeply pitched roof over the nave and chancel, with flat-roofed aisles. The single storey flat-roofed narthex has a stone coping at the wall head and two shallow steps lead to a central doorway with a classical stone surround, surmounted by a statue of St Joan of Arc by the artist Roger de Villiers. An access ramp has been installed to the left of the doorway. To either side of the door is a window with moulded stone surround, glazed with small leaded bulls-eyes. In the west wall is a large semi-circular headed stained-glass west window. Set back from the narthex are the chapel of St Catherine and St Margaret to the north, and the baptistery to the south. The chapel and the baptistery are flat-roofed and square in plan with a stone cornice at the wall head; the corners are treated as a series of receding pilaster strips. In each face is a single blind arch with a leaded oculus.

The Blessed Sacrament Chapel (originally the Lady Chapel) is expressed as a series of flat-roofed rectangular forms of slightly varying height. The aisle and chapel have stone coping at the wall head. To the far east, a flat-roofed single-storey sacristy connects the church to the neo-Georgian presbytery. Along side the south aisle is an open-arcaded campanile with pyramidal roof. Adjacent to this is a two-storey gable-ended projecting wing with a central doorway, above which is a niche with a statue of the Virgin and Child by parishioner, Miss Pauline de Almay. To the west is a courtyard space; enclosed by the flank wall of the hall built in 2008, known as St Joan's Centre.

The fenestration is simple with the single stained-glass window to the west end, and elsewhere clear leaded glass in semi-circular-headed, square-headed and circular windows.

The church is set back from the road; a lawn with an avenue of cherry trees leads to a hedged piazza at the west front of the church. The setting provides a formal, processional approach to the building.

INTERIOR: The church has a barrel-vaulted ceiling and plain arcading beneath semi-circular-headed clerestory windows. Blind arches reach over the sanctuary clerestory windows, cutting into the barrel vault. Original pine pews and parquet floors remain in situ. The aisles have flat ceilings and transverse arches springing from the arcade piers. Behind the altar is a large apsidal niche in with a crucifix, made by a local artist. Above the altar is a gilded baldacchino. The sanctuary floor is of Roman stone with a large porphyry star; however this is covered with carpet. The Blessed Sacrement Chapel has a flat ceiling with joists expressed in plaster and embellished at either end with gilded ionic scrolls. To the north, full height blind arcading is punctured by circular clerestory windows and barrel vaulted cells. The chapel's north passage aisle is created by transverse arched apertures connecting the cells through their supporting walls.

FIXTURES AND FITTINGS: The church has six pieces of statuary by Vernon Hill: St Joan of Arc, St George, St Joseph and the Holy Child, the Virgin and Child, St Margaret and St Catherine. Bronze Stations of the Cross by Agatha Walker, installed between 1965 and 1970 hang on the aisle walls. The west window is by Moira Forsyth ARCA FMGP (1905-1991) and was installed in May 1973. Henry Willis 2 organ, installed in late 2009, originating from Greyfriars Presbyterian church in Aberdeen.

HISTORY: The church was commissioned by Father Etienne Robo; priest to Farnham's Catholic community between 1913 and 1951. In 1923 the site on Tilford Road was purchased and a building fund set up. Fr Robo decided to name the church after St Joan of Arc, who had been canonised three years earlier, in 1920. The foundation stone was laid in 1929. The north-west chapel (completed 1937) was dedicated to Saints Catherine and Margaret, who had come to Joan d'Arc in visions, urging her to her calling. The choice of St Joan of Arc as a patron saint was particularly fitting as Farnham Castle had been one of the principle residences of Cardinal Henry Beaufort (1377-1447), who had presided over the trial of Joan d'Arc, had been present at her martyrdom, and had ordered her ashes to be thrown into the Seine. The church and the castle stand on opposite sides of the valley in which the historic centre of Farnham sits.

John Edward Dixon-Spain F.R.I.B.A (1878-1955) was the son of an Anglican vicar, but converted to Roman Catholicism in 1914. Dixon-Spain's commissions were diverse, and included a number of film studios, several cinemas, and after 1945 he was chiefly involved in designing Roman Catholic primary and secondary schools. Dixon-Spain is known to have built three churches; St Joan of Arc, Farnham, St Alphage, Burnt Oak, and St Hugh of Lincoln, Letchworth. For these, Dixon-Spain consistently adopted the Romanesque style, which had gained popularity in the early decades of the C20. St Joan of Arc is traditional in idiom and layout; however, the architecture does not slavishly follow earlier forms. The crisp compositions of line, plane and form, offers a modern interpretation of the Romanesque style. The simple interior, with its refined use of unembellished geometric forms, is an elegant arrangement of positive and negative space. This is particularly successful in the Lady Chapel, where the blind and intersecting arches result in a very sculptural composition. The dedication of the church to St Joan is an unusual one, believed to be shared by only three other churches in England, and especially pertinent for Farnham's church, given its proximity to Farnham Castle.

Set against the church's simple interior are a number of artworks designed especially for the church. The statuary by Vernon Hill is a particularly strong element of the artistic scheme; his naïve style relating well to the architecture of the building. Hill was born in Halifax in 1887 and was apprenticed as a lithographer at the age of 13. His first illustrations were published in 1909. Hill went on to work on numerous public commissions, including a number of reliefs on the great bronze doors of Guildford Cathedral (1932-61), listed Grade II*, by E. Maufe, and the figures of Justice, Victory and Courage on the Air Forces Memorial at Runnymede, Surrey (1953, listed Grade II*), also by Maufe.

The presbytery and St Joan's Centre are not of special architectural or historic interest.

SOURCES:
Sladen, T and Antram, N., St Joan of Arc Farnham, Architectural and Historic Review of Churches in the Roman Catholic Diocese of Arundel and Brighton (2005)Straiton, M., St Joan of Arc: The Saint and her Church in Farnham (2005)

REASONS FOR DESIGNATION:
The Roman Catholic Church of St Joan of Arc is listed at Grade II for the following principal reasons:
* Architectural: the church offers a successful, modern, interpretation of the Romanesque style; its interest strengthened by the dedication and the pertinence of that dedication to the location.
* Artistic: the statues by Vernon Hill are a strong element of the artistic scheme; the artist's naïve style complementing well the architecture of the building.