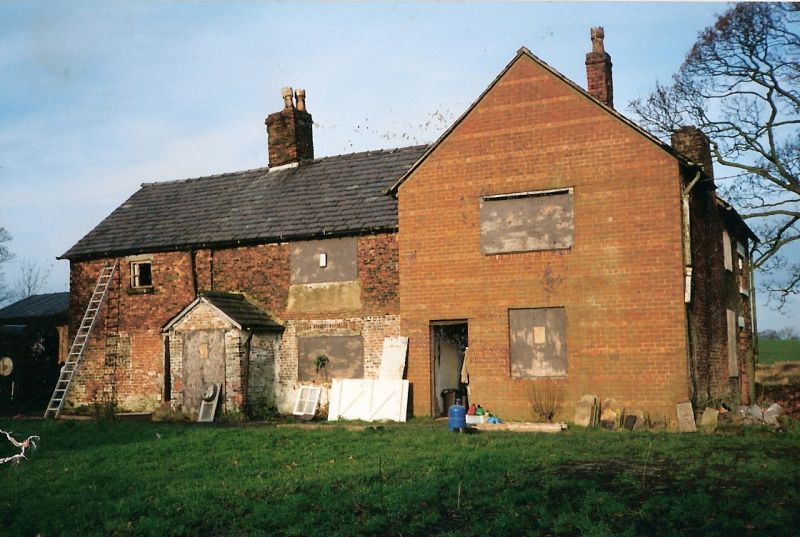 MATERIALS: Timber-framing on a stone plinth with partly-rendered brick beneath a slate roofs.

PLAN: The building is rectangular in plan.

EXTERIOR: The front elevation is of three bays with a modern garage attached to the left side. The right bay cross wing projects forward slightly and is a gabled early C17 timber framed wing fronted with imported second-hand bricks on a stone plinth. The central bay has a rebuilt porch beneath a pitched roof. The earlier planked front door has been reused. The main elevation has a hand-made brick face with some modern patching on a stone plinth. The left bay is a modern domestic rebuild of the former barn. All windows and sills throughout the building are modern. There is a ridge stack at the junction of the central and left bay and a roof stack to the right bay. The east elevation has a stone plinth along the full length of the cross wing, beyond which is the C19 outshot extension. Some modern brick patching is visible to the wall of the cross wing and there is a blocked doorway evident in the outshot extension. The rear elevation is largely rendered. There is a reused timber door in the outshot gable. A modern single-storey brick and glass conservatory has been added to the rear of the central bay. The newly built west bay has a catslide roof with the modern garage forming the remainder of this elevation.

INTERIOR: Entrance via the front porch leads to a baffle-entry with access to the left leading through an inserted doorway into the rebuilt two-storey west wing where many former ceiling beams and joists have been reused. To the right of the baffle-entry is the central bay where two ceiling beams remain in situ, together with two older horizontal timber wall beams partly exposed as lintels above the front window and the rear door to the conservatory. A former front door into the central bay has been blocked. The ground floor of the cross wing has been opened out into a single room and a staircase removed, two doors have been blocked that formerly gave access from the central bay to the cross wing. An early timber plank door gives access into the rear outshot from where there is access to the rear door, the staircase, a bathroom in the outshot extension and the cross wing. The cross wing contains substantial timber framing with chamfered beams and joists and a stone fireplace with uprights and lintel suggesting a C17 date, and a partially blocked oven in the east wall. A door from the rear of the cross wing leads into the outshot extension. The upper floor contains four bedrooms, one in the central bay, two in the cross wing, and one and a bathroom in the outshot. Timber framing with wattle and daub infill is exposed in abundance and there is a tie beam in the central bay. The attic contains a mix of early and replaced timbers. There is some surviving wattle and daub infill between the central bay and the cross wing and some earth floors survive in the cross wing attic.

Modern additions are not of special interest.

HISTORY: Holt is the ancient home of the Chisnall family and is mentioned in C14 documents. From 1518 to 1912 The Holt was owned by the Standish family. Holt Farm has a brick exterior of c1700 concealing remains of a timber-framed house of late C16/early C17 date. The present central bay was the original open hall with the right (east) bay being a timber-framed cross wing thought to have been added in the early C17. The current owners believe that the building was extensively modified internally about 1840. A rear outshot was added during the C19 and this was extended at its north-east corner later in the C19. A former rear door in the outshot extension has been bricked up. The building had at one time been converted into two houses. During the 1950s the south gable of the east cross wing collapsed and was rebuilt using Accrington bricks. In the 1970s the house became empty and by 1980 it was derelict and remained so until bought by the present owners in 1996. Since then major renovation work has been carried out. This has involved demolition of the former barn which formed the left (west) bay of the house and its rebuilding as domestic accommodation, erection of a double garage attached to the newly constructed left bay, rebuilding of the front porch, erection of a rear outshot connecting the 1990s-built left bay and the garage, and construction of a glass and brick conservatory between the two rear outshots. This also involved extensive replacement of windows, and brick repairs and internal reordering.

REASONS FOR DESIGNATION:
Holt Farm is designated at Grade II for the following principal reasons:
* DATE: despite modernisation it still retains the core of a late-medieval timber-framed building
* GROUP VALUE: it is one of a significant group of farmhouses of similar date that are listed at Grade II, located in the rural hinterland of Coppull.
* ARCHITECTURAL INTEREST: it may contain further evidence of its evolution as a farmhouse during the last four centuries hidden by later alterations.

Holt Farm is recommended for designation at Grade II for the following principal reasons:
* DATE: despite modernisation it still retains the core of a late-medieval timber-framed building
* GROUP VALUE: it is one of a significant group of farmhouses of similar date that are listed at Grade II, located in the rural hinterland of Coppull.
* ARCHITECTURAL INTEREST: it may contain further evidence of its evolution as a farmhouse during the last four centuries, hidden behind later alterations.