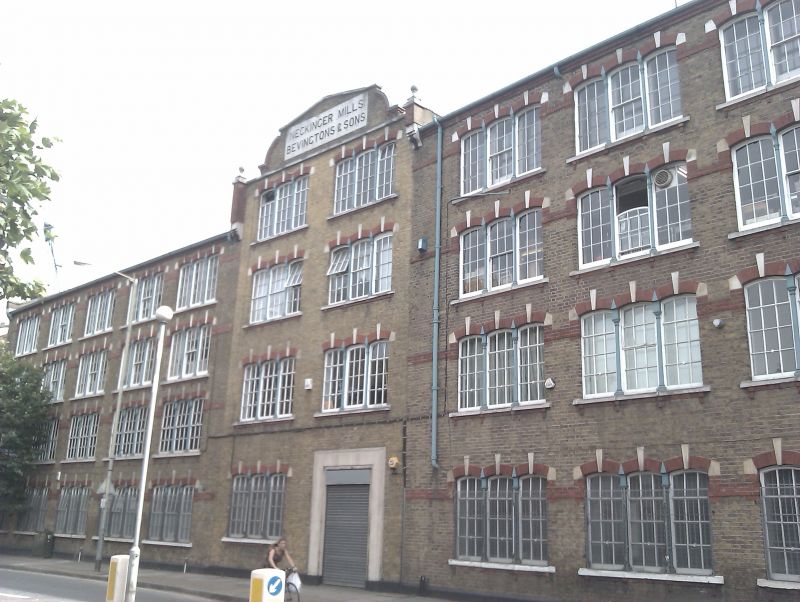 PLAN: The warehouse is rectangular in plan but formed of three elements; a central two-bay block, with a four-bay block to the west, and a five-bay block to the east. The west block is wedge-shaped; accommodating the neighbouring railway embankment which cuts diagonally past the building. The long north (front) elevation of the building faces on to Abbey Street. There is a loading tower at the west end of the south (rear) elevation.

EXTERIOR: Nos. 162-164 has four storeys; the roofs are pitched, with eaves to the east and west blocks. The central block has a shaped gable-end to the front. The gable end has a stone plaque which reads: NECKINGER MILLS / BEVINGTONS AND SONS

The building is heavily fenestrated. The distinctive windows are tripartite in form, divided by slim cast-iron columns. Each opening has a gauged red-brick segmental arch, with stone shoulders to the far left and right of each tripartite group. The arches have pronounced stone keystones that extend several courses above the tops of the brick arches. The majority of the windows are twelve-light steel casements; in some cases the central window of each group is a six-over-six timber sliding sash window. Horizontal bands of red brick connect the windows in the east and west block. There is no banding on the central block. The central block has a doorway with a deep, flat, stone surround. The half-glazed timber door which survives behind a metal rolling shutter.

The east elevation has a gable-end and is three bays wide, with fenestration matching the front elevation. The central bay has loading doors on four floors; the doors, hoist, and fold-down loading platforms survive. A date stone set into the wall reads: R.K.B / 1864.

The rear elevation is largely the same as the front; dominated by the rows of tripartite windows. An external metal fire escape has been fitted. There is a second date stone which reads: J.B.B. J.W.B. / S.B.B. H.H. / 1864. The initials are those of the company's partners. The loading tower has five stages and has slightly grander detailing than the rest of the building. The bottom stage is of vermiculated stone blocks, with the four stages above of yellow stock brickwork with red brick and stone details. At the top is a machicolated cornice. The loading doors on the south face of the tower have stone segmental arches and a stone band runs beneath the fifth stage; three of the loading doors survive, as does the hoist, which has an arched brace and circular bracing in the spandrel.

A setted roadway, which runs between the warehouse and No. 166 Abbey Street, provides vehicular access into the site. No. 166 Abbey Street is orientated to the west. It is three storeys high and three bays wide with a central door. The single-bay north elevation looks out onto Abbey Street. Also of yellow stock brick, the building has fenestration and banding detailing to match the warehouse, although the windows are smaller one-over-one timber sliding sashes.

INTERIOR: Internally, the warehouse has been sub-divided to create the live-work studios and commercial units; however the structure of the building remains evident. Floor joists are supported by slender cast iron columns, which are cruciform in section and widen out at the top, where they join a horizontal rectangular iron plate.

HISTORY: Nos. 162-164 Abbey Street was built in the mid C19 as warehousing at Neckinger Mills. It was constructed for Bevingtons and Sons, one of the foremost tanneries to occupy the Bermondsey area in the C19. Established at the turn of the C19, Bevingtons and Sons built up an international reputation as producers of fine, soft skins. At the time of its departure from the Neckinger site c1980, the company was also one of the longest-established firms of tanners in the area.

The abundant supply of water from tidal streams and ditches, and its location apart from the cities of London and Westminster, made Bermondsey a centre for leather production and associated industries from the medieval period. During the late C18 and C19, with the development of new industrial techniques and machinery, these industries grew into large, organised operations.

Neckinger Mills was originally a late-C18 paper mill, taking its name from the Neckinger, a tidal stream which provided the site with water. Mattias Koops, working with Elias Carpenter, developed methods for recycling paper and for the production of paper made from raw materials such as straw and wood. In 1806, following Koops' bankruptcy, the newly founded Messers Bevingtons and Sons took a lease on the six-acre Neckinger Mills site, and then became a site for the processing of animal skins for leather.

In 1838, the new railway line from London Bridge to Greenwich was constructed, and this cut diagonally across the Neckinger Mills site, dividing it into two uneven parts; the larger part to the west, and the smaller part to the east. The line was widened in 1841 and again in 1850. Nos. 162-164 was built in 1864. Plans of the site suggest that the narrow central part of the building was built between 1885 and 1900. A 1900 plan of the warehouse identifies the three parts of the building as storing wool and leather, hat and glove leather, and hat leather. No. 166 Abbey Street is known to pre-date 1885; it was possibly intended for a senior member of staff who lived on-site.

Bevingtons and Sons continued operations on its large site until 1935, when part of their works was moved to Hawley Hill near Dartford. The larger, western, part of the site was sold to Bermondsey Borough Council who redeveloped it as the Neckinger Estate. The smaller remaining part, to the east, comprised only the warehouse and No. 166 Abbey Street, and a number of tanning pits to the rear. The company finally left the site in the 1980s, when the warehouse was converted to live-work units.

REASONS FOR DESIGNATION: Nos. 162-164 (including No. 166) Abbey Street, Bermondsey, a large mid C19 warehouse and associated dwelling house built for Bevingtons and Sons as part of the Neckinger Mills site, is listed at Grade II for the following principal reasons:
* Architectural interest: the striking architectural treatment of the elevations, which are largely unaltered;
* Historic interest: the warehouse is associated with Bermondsey's historic leather industry, and this substantial building was built for one of the most successful tanneries operating in the area during the C19.

Nos. 162-164 (including No. 166) Abbey Street, Bermondsey, a large mid C19 warehouse and associated dwelling house built for Bevingtons and Sons, firm of tanners, as part of the Neckinger Mills site, is designated at Grade II for the following principal reasons:
* Architectural interest: for the striking architectural treatment of the elevations, which are largely unaltered;
* Historic interest: the warehouse is associated with Bermondsey's historic leather industry, and this substantial building was built for one of the most successful tanneries operating in the area during the C19.