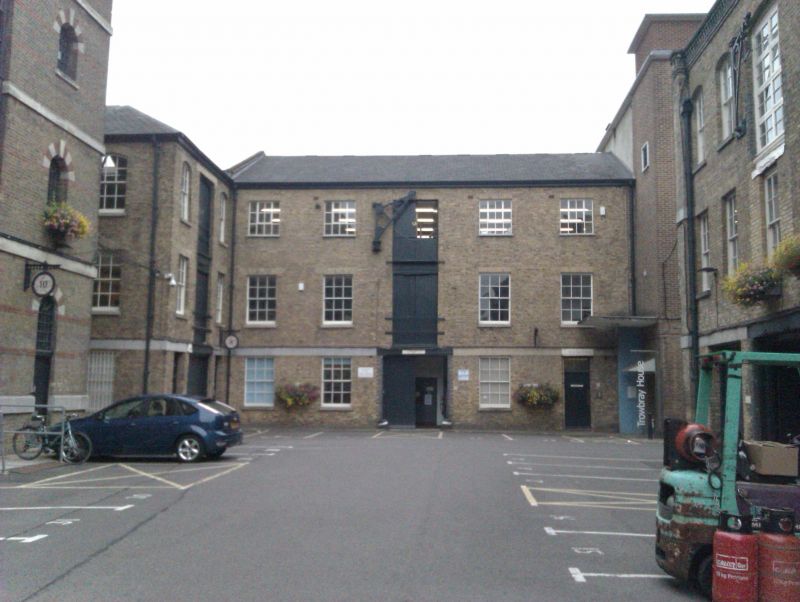 EXTERIOR: Unit 7 has five bays, the central bay has a solid timber double door at ground floor and loading doors on the floors above. To the left of the top loading door is a pivot hoist. To the far right at ground floor is a panelled timber personnel door with a rectangular fanlight above. A continuous stone lintel runs above the ground floor window heads, broken by a timber lintel which runs above the central door. The third floor windows are square steel casements. Most of the flat gauged-brick arches over the upper floor windows have been replaced with soldier-courses.

The west elevation of unit 8 has three bays; the central bay matching that of unit 7. At ground floor there are timber panelled personnel doors in the flanking bays. The first floor windows have flat gauged-brick arches, whilst the top floor windows have arched segmental heads.

The north elevation of unit 8 has five bays and is very close in character to the west elevation. There are two pivot hoists by the loading doors in the central bay; one at first and one at second floor, both have curved braces with circular bracing in the spandrel. A continuous stone lintel runs above the ground floor window heads, the first floor windows have flat gauged-brick arches, and the top floor windows have arched segmental heads. To the south elevation there are two bays, however the majority of the windows have been bricked-up or greatly reduced in size.

INTERIOR: Internally both units have been partially subdivided at ground and first floor, but retain large open plan spaces on the top floor, where in both cases the roof structure is exposed.

HISTORY: Units 7 and 8, the Leather Market, form part of the early-C19 leather and skin market, which was the commercial hub of the Bermondsey leather industry.

The abundant supply of water from tidal streams and ditches, and its location apart from the cities of London and Westminster, made Bermondsey a centre for leather production and associated industries from the medieval period. During the late C18 and C19, with the development of new industrial techniques and machinery, these industries grew into large, organized, operations.

The Leather Market was established in the early 1830s and originally comprised two main parts: to the west, a quadrangle of warehouses, and to the east, a narrow oblong of ground with semi-circular ends and a covered arcade which ran around the edge. In the warehouses to the west, leather factors sold the leather produced by the Bermondsey tanneries on to curriers and leather sellers. The arcaded area to the east was where skins from the butchers were sold on to be processed for wool, leather and parchment.

The eastern part of the market was badly damaged during the Second World War and has subsequently been redeveloped. The western part of the Leather Market survives. Parts date to the early 1830s, while other elements are later, dating from the late C19; it is believed that units 7 and 8 date from the earlier phase.