A Grade I Listed Building in Bath, Bath and North East Somerset 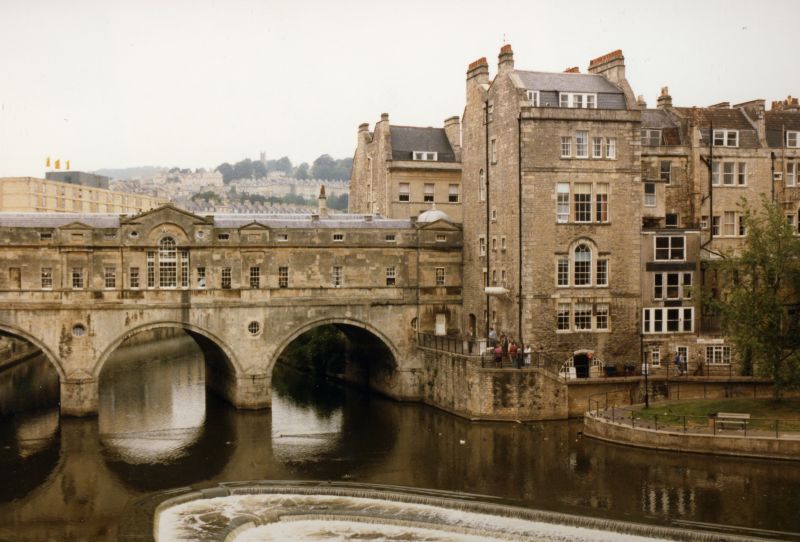 Bridge. 1769-1774, western mid-stream pier rebuilt in 1804, altered 1890's and 1903 (plaque), restored to some degree 1951 and 1975 (plaque). By Robert Adam, for William Johnstone Pulteney.
MATERIALS: Limestone ashlar with Welsh slate and lead roofs.
Bridge lined with shops on both sides, but separately listed although part of same design and structure (qv 1-17 Pulteney Bridge).
PLAN: Bridge of three high segmental arches of equal span crossing river from abutments, which stand forward, into water.
STYLE: Palladian style.
EXTERIOR: South elevation (downstream). Single storey and attic super-imposed over arches. Spandrels of piers are pierced by roundels, with half roundels in abutments. Above plinth, on upper moulding of which stands Doric order, and which serves as sill for windows throughout. Design unbalanced as western pavilion was moved eastward over arch when Grand Parade was constructed in 1895, and appearance further changed when water level of Avon was raised by construction of Pulteney weir in 1979. Entablature has continuously fluted frieze to central section which has pediment, broken into by large Venetian window, framed by Doric pilasters and four/four-sashes. Dentil cornice right across bridge. On either side of this are three six/six-sashes, centre one framed by Doric pilasters and has small attic pediment, feature centred over pier. Further six/six-sash central to arch, and another above spandrel on east side before pavilion reached. Pavilion has six/six-sash with another one below and attic window above crowned by small pediment. Western (rebuilt) pavilion has modern tripartite sash in arched recess, attic window and pediment. Pavilions are roofed by lead domes. Elevation only approximation of original design (see below). North (upstream) elevation. Elevation remains remarkable contrast to semi-restored south one, only properly opened up to view in c1990. Arches are same, above, all shops are jettied out over water and have slated pent roofs and six/six-sashes, many of which are early C19, demonstrating rapid alteration that took place. Some of upper floor revealed, showing C19 two/two-sashes, and pedimented centre with recessed Venetian feature. Street elevations will be described in next listings, but notable that Venetian feature of downstream elevation is repeated on street front and that Doric porticos that once fronted end pavilions as frame to bridge entrances are all missing.
HISTORY: This bridge connected Bath with Bathwick, and thus opened up a new phase in the city¿s growth. William Pulteney opened discussions with the Corporation about the creation of a new bridge in 1768, and obtained an Act for the development in 1769. A design by Thomas Paty of Bristol was prepared in 1769 but abandoned; Pulteney may have known his fellow Edinburgh citizen Robert Adam prior to the commission. It was Adam who probably had the idea of making it an inhabited bridge, with shops along its length; he responded to Palladio¿s renowned proposals for monumental bridges, surmounted with habitable dwellings. His designs for bridge survive at Soane Museum, dated 1777 and 1782 (probably retrospectively). Much of the bridge was ready for occupancy by 1773; by then the project had cost around £11,000. The shops were altered in 1792-94 to the designs of Thomas Baldwin. In 1799 the centre had started to fail: John Pinch, estate surveyor, oversaw the repair from 1802, when the shops above the north side were taken down and rebuilt. Telford prepared an alternative design for a single span cast iron bridge at this time. Scheduled as and Ancient Monument in 1936, the south side of the elevation was restored in 1951 and the piers were repaired in 1971. The upper structure of the bridge was restored in 1975 by The Georgian Group and Bath City Council (John Vivian, architect). The bridge is a notable Neoclassical structure, embodying the neo-Roman scale of ambition held by the Pulteney estate and Robert Adam at this time.
SOURCES: Ison W: The Georgian Buildings of Bath: London: 1948-: 65; Lees-Milne J and Ford D: Images of Bath: London: 1982-: 251; Jean Manco, `Pulteney Bridge¿, Architectural History vol 38 (1995), 129-47.