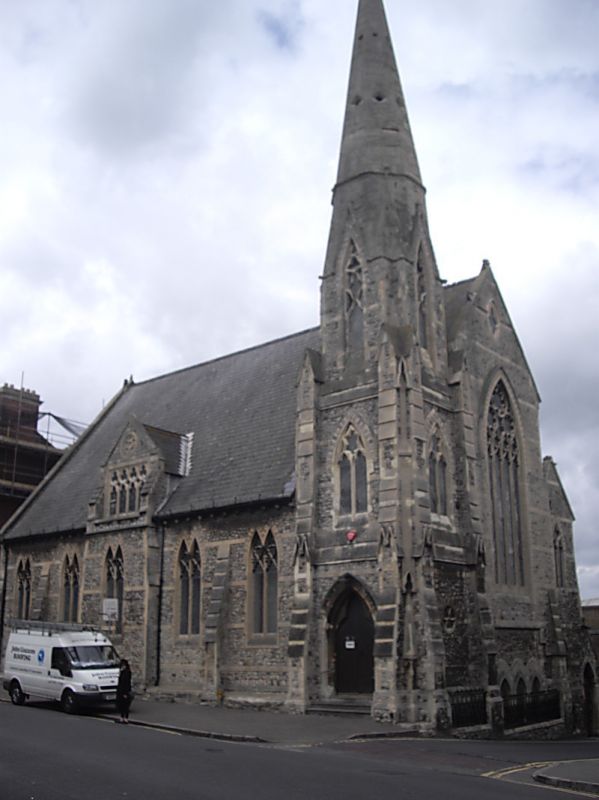 II
Congregational Church (now mosque), 1860 by Poulton and Woodman of Reading. Late C20 internal alterations, in particular to the interior.

PLAN:
Five-bay aisleless nave with a small apse to the west and balcony hidden behind modern panelling at east end of nave, south-east tower with main entrance, north-west porch, south-west vestry and external arched entrance from Union Crescent, basement.
EXTERIOR:
Built on a sloping site in an Early English Gothic style, the south-east corner has a slightly projecting, buttressed tower topped by a tall polygonal spire with lancet windows, projecting through the pitched aisle roof. At the west end of the nave is a small polygonal apse adjoined to the south by a low gabled vestry with a pointed-arched gateway to the west providing a passageway between the church and end wall of the adjoining property to a small outbuilding at the south-west corner. This passage is now roofed over with a modern flat roof. The north and south elevations are symmetrical (other than the tower which is balanced on the south elevation by a set-back, two-storey gabled porch) each with five tall double lancet windows with traceried heads and polychrome brick voussoirs. The central windows on each elevation project slightly forward and are topped by large gabled dormers each with a square-headed four-light traceried window with a trefoil over each light, and a blind roundel in the gable. The southern of these features has a quatrefoil with an inset scroll bearing the date 1860 in Roman numerals beneath the central window. The walling is divided by horizontal stone bands and coped buttresses. The east end has a large, arched, four-light, traceried window with hood mould and a small quatrefoil window above. Below the east window, behind ornate iron railings atop a low boundary wall, are three windows in triple-arch. Due to the slope of the ground, the south elevation is raised on a yellow brick plinth containing a basement, adjoined by two single-storey buildings belonging to the adjoining property.

INTERIOR:
A modern suspended ceiling has been introduced into the nave, cutting across the dormer windows, although the wooden open-trussed roof presumably survives above since the lower part of the trusses, supported on plain stepped corbels, remain visible below the suspended ceiling. The walls have been lined in modern pine matchboard panelling and this has been continued to ceiling height across the eastern end of the nave. It is likely that the gallery survives behind this screen. The western end of the nave also has matchboard panelling cutting across the top of the apse, which has an inserted suspended ceiling and glazed wooden screen. The stone ribs of the apse rise from elaborate floral corbels and are presumed to survive above the inserted ceiling. All windows have plain leaded glass.

FIXTURES AND FITTINGS:
Other than some doors, few original fittings survive.

HISTORY:
Margate, one of the first English seaside resorts, flourished in the C19 as a destination favoured by middle-class Londoners, particularly after the establishment of a regular steamer service from London in 1815 and to a lesser extent after the opening of Margate Sands railway station in 1846. The Kent Congregational Association visited Margate in 1843-4 and felt there was a need for a Congregationalist church in the town but deferred aspirations to build one at that time in order to avoid friction with the other denominations present. In 1845 a number of members of the Zion Chapel of the Countess of Huntingdon's Connection, located on Victoria Road, left and decided to form a Congregational church which they originally set up in a house on Cecil Street. From here the congregation fitted up the former Bettison's Library on the same street as a chapel but by the late 1850s this was too small and plans were drawn up for a new church on Union Crescent. A drawing of the proposed church was published in The Builder in December 1858. Building started on 23 January 1860 and was completed on 7 September the same year at a cost of £3,400.

The church was originally designed without a gallery but it was decided that one was necessary for the increased attendance during the summer season in this seaside town. It had also originally been planned to include a Sunday school beneath the church but this plan was dropped when the local council withheld consent unless the floor of the church was raised, which would have proved too costly. A Sunday school (now a Union church) on the east side of Pump Lane was eventually built in 1872 probably also designed by Poulton and Woodman (this is not included in the designation). After the church closed it was converted to a gymnastic club and the interior altered. In 2003 it converted for use as a mosque.

REASONS FOR DESIGNATION:
The Former Congregational Church, Union Crescent, Margate, is designated at Grade II for the following principal reasons:
* Architectural quality: the design is an imaginative expression of the Gothic Revival, in the 'Rogue' Gothic style associated with EB Lamb and SS Teulon, with an impressive off-centre spire and good-quality detailing, designed by a nationally-recognised practice who specialised in Nonconformist churches;
* Historic interest: as an assertive expression of Nonconformism in Margate, one of the earliest and most famous seaside resorts in England;
* Townscape value: the building has an imposing presence on this street of largely Victorian buildings.