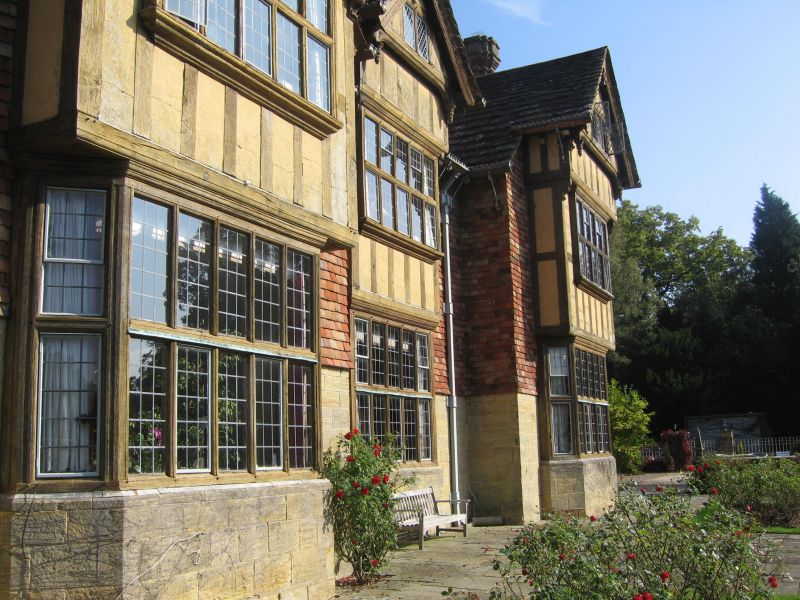 II
Country house, begun just before the First World War and finished in 1920, by builders Norman and Burt of Burgess Hill for the Kleinwort family. Minor later alterations.

STYLE & MATERIALS: neo-Elizabethan in style, and has a mixture of half-timbered, brick and tile-hung elevations with a pitched stone roof and clusters of tall red brick chimneys.

PLAN: roughly H-shaped, with two cross wings under pitched roofs advancing very slightly from the south front. It has two principal storeys plus a partial basement and attic.

EXTERIOR: The house is approached from the north-west and its entrance front comprises a projecting full-height jettied entrance bay under a gable with pegged timber-framing. The bay has mullion windows with leaded lights, and a large oak doorcase and door with strapwork decoration. To either side of the entrance bay the elevation is timber-framed with close-studding and mullion and transom windows. Further to the left is a single storey stone range with an eight-light mullion and transom windows, a pitched roof and a cross-gable with stone ball finials. Further to the right is a large brick chimney stack with stone quoins and a row of four tall brick chimneys with moulded cornices. The south front is symmetrical and has a stone plinth, with three near-identical timber-framed gabled jettied bays, the outer two slightly larger and projecting forward. These have timber mullion and transom windows and the nogging is rendered in a cream colour, which contrasts with the red tile hanging elsewhere on the elevation. The east front is dominated by a large end chimney stack and a round turret, topped by a lead ogee dome. This has a Tudor-arched door at its base and mullion and transom windows. Abutting the turret, a plainer service range (with a large end chimney stack) runs to the rear of the house. This has brick walls, a tiled roof, mullion and transom windows on the ground and first floor, and attic dormer windows. The northern elevation, to the rear of the building, is plain red brick and its composition largely determined by function. The windows are stone mullions.

INTERIORS: largely neo-Jacobean in style. The hallway is panelled, with strapwork to the panelling above the stone fireplace, this with tapering classical pilasters, also decorated with strapwork. The hall opens into the stair hall, from where an open-well oak staircase with flat balusters and elaborate carved newel posts rises to a gallery landing with open arches supported on carved pillars. There is a 'secret' cupboard on the stair landing, released by a hidden button in the centre of a carved rosette. The stair hall is panelled and has carved pilasters and carved doorcases with pediments leading to the ground floor principal rooms (two pediments are missing); both hall and stair hall have a coffered plaster ceiling. The drawing room is panelled to dado height and then has fluted Ionic pilasters, and a frieze. There is a strapwork plaster ceiling and a large fireplace with a stone frieze and a timber surround, this with three-quarter, paired Ionic columns. The radiator, like those elsewhere in the house, is boxed in with a grille formed of turned timber balusters. The dining room, and a room linking the dining and drawing rooms, both have panelled walls (with lozenge designs in the panelling) and stone fireplaces with timber overmantles. The middle room has timber beams and decorative plasterwork. The dining room has three carved timber doorcases with barley-sugar twisted pillars, and a coffered ceiling. A study, accessed off the entrance hall, has panelling to dado height and a full-height panelling above the fireplace, which is stone with green marble reveals. A corridor, panelled to dado height, runs off the entrance hall to the servants' wing. This comprises a series of working rooms including butler's pantry (complete with cupboards), larder (which has stone shelves) and a kitchen containing a 1950s English Rose kitchen suite. At the end of the service corridor is a sitting room, possibly the housekeeper's room, this with a fireplace, picture rail, in-built shelves and a WC. The service wing has a dog-leg staircase with splat balusters and a timber handrail.

The first floor has an open gallery landing, which is panelled and has a Tudor-arched fireplace. The plasterwork ceiling is in a curvilinear design, with a large pendant over the stairwell, from which hangs an iron chandelier. The panelled stairwell is lit by a large 18-light mullion and transom window and has a floral plasterwork frieze. The four principal bedrooms have original stone fireplaces, also neo-Jacobean in style with timber chimney pieces. There are three original bathrooms, lined with marble, two of which contain original bathtubs, one an original sink. As on the ground floor, there is a corridor leading to the service wing; this is unpanelled, with the wood panelling stopping when it is just out of sight from the landing. The attic contains further rooms, these with simple joinery and no fireplaces, and a set of linen cupboards. A shower room and WC are lined with original glazed tiles in black and white.

LANDSCAPE FEATURES: include a PAVED TERRACE running along the south, east and west fronts of the house, this with stone retaining walls which extend alongside the main north-western drive. There are two pairs of GATE PIERS topped with obelisks, complete with IRON GATES.

The boundary wall to the north of the estate, a swimming pool to the east, and tennis courts to the north all post-date the Second World War and lack special interest.

HISTORY: The character of West Sussex changed in the Victorian period, as the growth of London and the beginning of train services to and from the capital made the county a viable home for a new type: the city commuter. Farm land was purchased for development and some agricultural labourers found new work, first building suburban houses and then in service to their wealthy owners. The Kleinwort banking family, originally from Germany, were typical of the very richest of Sussex's new residents. They moved from a villa in Camberwell, south London (a neighbourhood which by the end of the C19 had lost much of its rural charm) to Bolnore House in Cuckfield, a mid-C19 mansion by Decimus Burton (now listed Grade II); the interiors of Bolnore and Chownes Mead share features such as a oak staircase and Jacobean plasterwork ceilings, these introduced to Bolnore House in 1930. From the turn of the century, Alexander Drake Kleinwort commuted each day by car to the family bank in the City of London and it was joked that the villagers of Cuckfield could regulate their lives by his departure every morning, as could the policeman on London Bridge as Kleinwort's Bentley roared past him at a quarter past three every afternoon on his return journey. Chownes Mead appears to have been the home of Alexander's son, Cyril, who is listed at this address in the London Gazette in the 1930s. Cyril and his brother Ernest became partners in the family firm in 1927. Ernest lived in Cuckfield too, at Heaselands, a Victorian farm rebuilt in 1932 (the garden here is on the Register of Historic Parks and Gardens).

REASONS FOR DESIGNATION: Chownes Mead is listed at Grade II for the following principal reasons:
* architectural interest: a handsome neo-Elizabethan-style house begun just before the outbreak of the First World War by local builders Norman and Burt;
* interiors: a richly-decorated neo-Jacobean interior complete with plasterwork ceilings, panelled walls, carved wood and stone fireplaces, and a grand open-well staircase;
* intactness: good survival of original fixtures and fittings in the servants' quarters, as well as in the principal rooms, and a coach house in the grounds
* landscape: a stone-paved terrace, gate piers topped with obelisks and iron gates all form part of the original design and create a suitably grand landscape setting for the house.