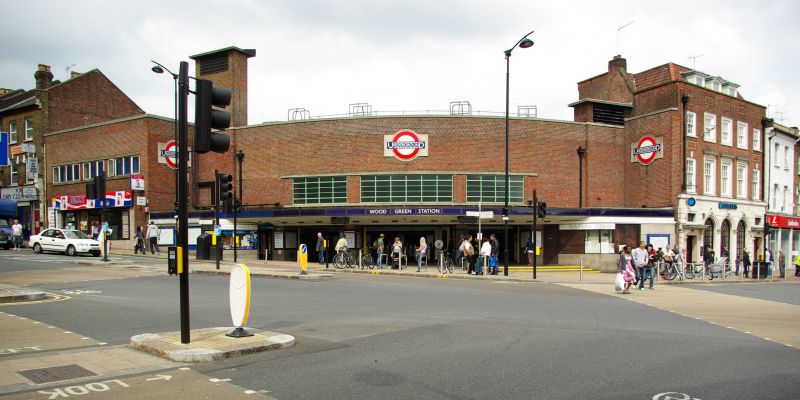 PLAN: Wood Green stands on a corner site at the junction of Wood Green High Road and Lordship Lane, sandwiched between late C19 commercial and residential properties (a section of which was demolished to create the station). It therefore has only one elevation (to the south-west) visible, in the form of a curved central entrance block. From the booking hall an escalator shaft descends northwards down to a central concourse between the two underground platforms.

EXTERIOR: the street elevation is faced with multi-coloured red Buckinghamshire bricks laid in English bond with a pattern, with a projecting concrete canopy (with a bronze-framed, replacement blue vitreous enamel name frieze) flanked by a rectangular, flat-roofed, retail/office block to the north and a thick full-height brick retaining wall to the adjoining property to the south-east. A louvered brick ventilation tower rises above either end of the convex frontage, the western one having been considerably heightened at some date. These 'relief shafts', designed to reduce the draft from oncoming trains, were a feature of the stations at this end of the Piccadilly Line. The canopy, with its gently stepped soffit with inset bronze framed light fittings, extends to form the roofs of two slightly projecting shop units, one at each side. These have polished grey Cornish granite finished walls and stallrisers and, although considerably altered, retain some of the original bronze fittings including the doors. Above the canopy the only fenestration on the curved frontage are the three horizontal multi-pane Crittall windows (the central window longer than the two outer ones) placed over the three wide entrances to the station. The lighting for the booking hall is augmented by clerestory windows concealed behind the front parapet with its artificial stone coping. Above the windows is a replacement roundel set in the original artificial stone surround. Two more identical roundels are located on the returns of the retaining wall and shop/office block. The shop front of this block has been completely replaced, as have the three original Crittall windows to what was originally the staff canteen above. The exterior of the shop below the staff canteen (194 High Road) and interiors of all three shops are not of special interest.

INTERIOR: the spacious elliptical booking hall is entered through three adjacent entrances separated by two rectangular piers clad in Cornish granite. At the base of each pier is a low iron balustrade on a granite base projecting onto the pavement below the canopy. The newel posts carry a disc and diamond motif used by Holden on other projects including Senate House. There are original bronze poster panels either side of the entrance bays. The booking hall has a flat lantern roof with Crittall clerestory windows braced by four deep reinforced concrete beams. Below the roof is a white painted concrete ring beam with a further ring beam at entrance level decorated by a shallow stepped pattern matching that on the canopy. The walls are of brown-grey brick relieved by orange-red brick to the window surrounds and pilasters on the rear wall. The original space has been altered by the introduction in 1988 of low flat-roofed ticket offices along the end (south-east) and rear walls. These are faced with brown quarry tiles to match the original finish of the lower level of the booking hall and have bronze balustrades with decorative panels to the roofs. Other than the blue station clock over the escalator shaft, virtually no original fittings remain and the floor has been re-tiled. In the staff corridors and stairs, as well as in the original canteen, now subdivided, the original cream with green trim dado tiling largely survives.

The escalator shaft exits the booking hall to the north-west and retains its plaster finish. The escalators have lost their original bronze casings (replaced in stainless steel and aluminium) and uplighters. At the foot of the escalators is a domed lower concourse with two tunnels either side to the platforms with shallow stepped concrete entrance panels. The original cream wall tiles with light green striped trim, and floor tiles, were replicated in 2009, as were the platform tiles although the original tiles remain on the far trackside walls. These have poster panels with the cream-light green trim. The platforms retain their original pre-cast concrete paving, signage with bronze-edged roundels and WAY OUT signs, and ten decorative bronze ventilation grilles with a design of a deer and two doves by the artist Harold Stabler (1872-1945). Other original platform features are the oak benches in the seating recesses, bronze head-wall units and the bronze doors to the fire hydrant cabinets.

Wood Green station was built as part of the first section of the northward extension of the Piccadilly Line to Cockfosters. This seven-mile extension beyond the original terminus of Finsbury Park, to serve the enlarging suburban areas in north Middlesex, was authorised by a parliamentary Act of 4 June 1930, and was overseen by Frank Pick (1878-1941), the visionary administrator of the Underground Group and Chief Executive of the London Transport Passenger Board from 1933. The first section of the extension, from Finsbury Park to Arnos Grove, which included the stations at Manor House, Turnpike Lane, Wood Green and Bounds Green, was opened on 19 September 1932. Southgate and Enfield West (now Oakwood) followed in March 1933, and the terminus at Cockfosters opened on 31 July 1933. Consideration had been given to calling the station Lordship Lane before Wood Green was decided upon. Like most of the stations on both the east and west extensions of the Piccadilly Line, Wood Green (constructed between 1931 and 1932) was designed by Charles Henry Holden (1875-1960). However, in part because of the constrained corner site in an existing shopping parade, the style is rather different from his more Modernist designs for other stations on the Piccadilly Line. With its curved street frontage, Wood Green is reminiscent of his earlier design for South Wimbledon completed in 1926, although in brick rather than stone. The station originally included an exhibition space at the rear (soon converted to a staff club room) and canteen for the station employees, as well as shops. In 1987-8 the booking hall was altered to accommodate the Underground Ticketing System (UTS) with a new booking office built against the back and side wall in front of the former exhibition space.

Charles Holden was born in Bolton, son of a textile engineer and trained with CR Ashbee before joining the practice of H Percy Adams, a specialist in hospital design, with whom he entered into partnership in 1907. Before and during the First World War, Holden was not committed to any particular style, designing, for example, the Arts and Crafts-inspired Belgrave Hospital for Children in 1899-1901 and the mannerist British Medical Association (now Zimbabwe House) in 1906-8. After the war, he designed 67 cemeteries for the Imperial (now Commonwealth) War Graves Commission; these show the growing simplification of his work. By this time his practice was known as Adams, Holden, and Pearson, and in 1924 they began to be appointed as consultant architects on the London Underground. In the mid-1920s Holden designed façades for stations on the Northern Line extension from Clapham South to Morden and in the 1930s designed most of the new stations at either end of the Piccadilly Line, finally ending their association in the late 1940s on the completion of stations on the eastern extension of the Central Line. Pick and Holden had both been deeply influenced by a short tour of examples of new architecture on the Continent which they had undertaken in the summer of 1930, and Holden's subsequent designs emphasised functionality (with the booking hall as the dominant element of the new buildings) combined with balanced geometry and the use of modern materials, especially glass and reinforced concrete. After the Second World War, Holden devised schemes for the reconstruction of Canterbury and London. None was carried through faithfully, but Holden had, through 55 Broadway, Senate House, and the tube stations, already left a more enduring mark on London than any architect of his generation.

Wood Green Underground station is designated at Grade II for the following principal reasons:
* Architectural interest: a distinctive and well detailed design, merging Charles Holden's earlier design for South Wimbledon on the Northern Line and his later Piccadilly Line 'house' style, accommodating a spacious, well lit booking hall into a corner site between existing buildings
* Historic interest: as one of the best group of Holden's ground-breaking Modernist designs for the Piccadilly Line extensions of the early 1930s. These were of great importance for introducing rational modern design based on continental models to a wider public and for imposing a brand image to buildings and design when this was still novel. They were widely praised in the architectural press at the time and still remain influential today
* Decorative features: includes important survivals such as the Harold Stabler designed platform ventilation grilles and the Holden designed main entrance railings