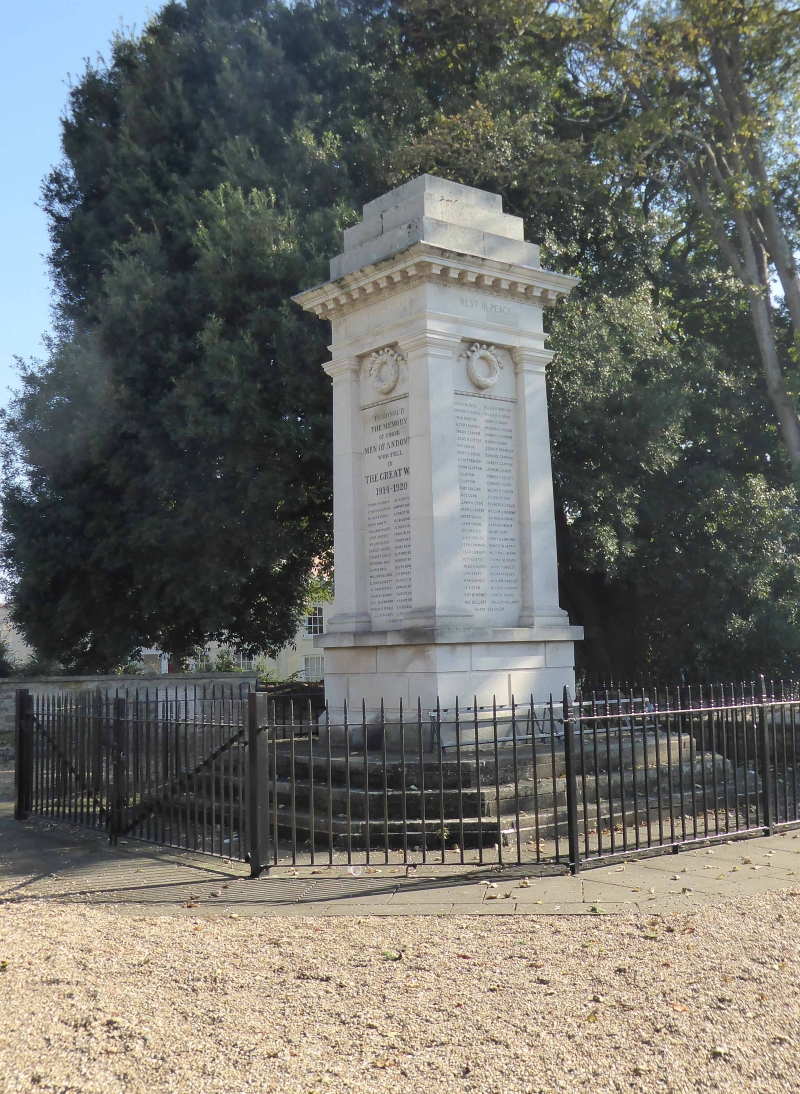 The stone cenotaph sits on a hexagonal base and is square on plan. It has a rusticated base, Tuscan corner pilasters, a dentil cornice and a stepped top. Each face of the monument is inscribed with the names of the Fallen with a wreath carved in relief above. The principal inscription reads, in capital letters: To honour / the memory / of those / men of Andover / who fell / in / the Great War / 1914-1920. The frieze is inscribed on all four sides, also in capitals: Our Glorious Dead/ Rest In Peace / But Their Name / Liveth For Evermore.

The memorial was unveiled on 5 May 1920 by the Lord Lieutenant of Hampshire Major-General JEB Seely. It was designed by the architect Herbert Cowley and constructed by Harry Page at the Angel Yard works in Andover. The memorial bears the names of 214 men who fell in the Great War and, unusually, the date reads 1914-1920. This reflects the years in which the town sustained casualties which could be attributed to the war, the last man listed being Captain Frederick Owen Maynard of the Royal Army Veterinary Corps (RAVC) who died of malaria in Egypt on the 12th January 1920.

Initially, in 1919, the Municipal Council proposed to commemorate the Fallen of the First World War in the same manner as those who served in the Boer War – with a memorial tablet inside the Guildhall. Plans for a more public monument emerged soon after, however, and this was paid for by public subscription. The War Memorial was originally located in Andover High Street, outside the courtyard of the Guildhall, and was moved to its present site in St Mary's churchyard in 1956. Flanking walls, with plaques bearing the names of the Fallen from the Second World War, have been erected later, either side of the memorial.

The War Memorial in the Garden of Remembrance, St Mary's Churchyard, Andover is designated at Grade II for the following principal reasons:
* Architectural Interest: a well-crafted stone memorial by Herbert Cowley;
* Historic Interest: unusually, the date reads 1914-1920, reflecting the years in which the town sustained casualties which could be attributed to the war; strong cultural and historical significance, both locally and nationally, and an eloquent witness to the impact of tragic world events on this community.