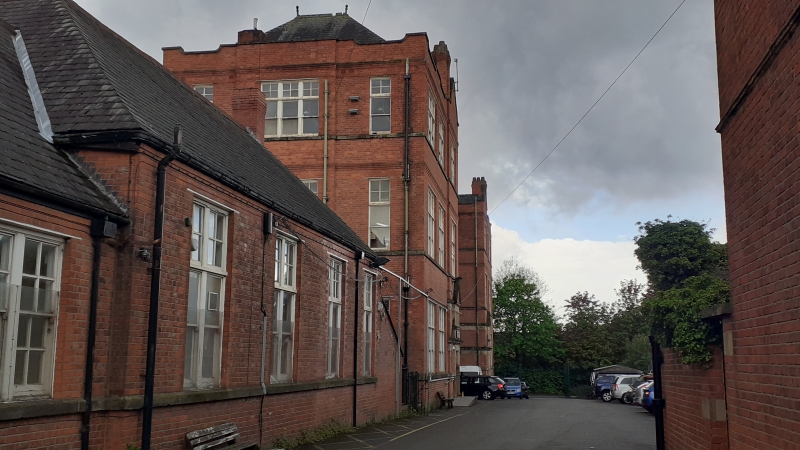 The main block of a Manchester Board School of 1896-97 by Potts, Son and Pickup.

MATERIALS: the main block is constructed of an iron-work skeleton with brick piers and facing and stone detailing.

The infants’ school, caretaker’s house and the boundary walls are not included in the listing.

EXTERIOR
This building is constructed in the Flemish Renaissance style and is of three-storeys plus basement. The north and south elevations are roughly symmetrical, with the central core flanked by projecting pavilions. Six-bays of the central section are visible to the north and seven to the south; these are separated by two-storey pilasters and chimney stacks.

There are four corner pavilions; the central range to the west has been stepped forward to create a continuous facade. Three of the entrances are via the pavilions, with boys to the north and girls to the south. That to the south-west is to the right of the pavilion, stepped forward from the central range. Entrances have triangulated pediments with triple windows, sandstone detailing and low relief lettering above the doors denoting ‘BOYS’ and ‘GIRLS’ as appropriate. The doors are renewed, although the multi-paned overlights are original.

All elevations incorporate stone and stepped brick string courses, as well as shaped parapets with Flemish gables, with the largest sited above the entrances. Windows to the north and south core are three-light, containing sashes with a four-pane hopper above. Windows to the pavilions are matching in style, although those to the perimeters of the east and west elevations are single-light. They are mostly flat-headed, although those to the first floor central core are set within segmental-headed recesses. The majority of windows are original although some, mainly to the north-west, have been renewed in a sympathetic style.

The central ranges to the east and west elevations are of three-bays and incorporate large oculi to the gables; that to the west is renewed while that to the east incorporates stained glass and wooden tracery designed to resemble Flemish gables. The east elevation retains its ground and first floor large multi-paned windows, separated by decorative pilasters. Those to the first floor incorporate stained glass to the upper lights. The equivalent window openings to the west have been either fully or partially bricked up, although the pilasters survive. Due to the sloping nature of the site, the basement windows are visible below and are similar in style.

INTERIOR
The main block is designed around two central halls running east-west; one sits to the ground floor and the other, originally double-height, to the first floor. This has since had a lightweight dropped ceiling inserted. There is a stage to the west end of each of the halls accessed via stairs to either side. That to the ground floor has part-glazed partitions within the proscenium arch. That to the first floor houses original lighting control equipment and rigging. The first floor hall has a half-glazed partition dividing the space in two. The underside of the L-shaped balcony which overlooked the space is visible to the east end. Windows to the east end of both halls are divided by turned decorative mullions. The upper lights to the first floor windows house stained glass with the city’s arms and the Board’s MSB monogram, as well as Tudor rose motifs.

Classrooms flank the halls to the north and south. These are divided from the hall by fixed glazed screens and from each other by sliding glazed partitions. Classroom doors are half-glazed with brass-finger plates and latches. Each classroom has retained its corner fireplace. The halls originally had three fireplaces each; the chimney stacks survive although the fireplaces have been blocked. The halls incorporate patterned relief tiles to dado height of the solid walls, now painted over.

The corner pavilions house further classrooms, cloakrooms and concrete staircases with scrolled metal handrails. There are two wooden corner cupboards containing wash basins and taps in the boys’ stairwells. Cloakrooms retain the ceiling plates with holes in which the poles supporting benches would have been placed. The second floor cloakroom to the north-east has a corner fireplace and a section of unpainted wall, exposing the original cream and brown tiles up to dado height. The original parquet floor is also exposed. The pavilions have solid walls aside from those facing the halls, which are glazed to the upper parts.

Some later partitions have been inserted to these floors, mainly to the north-east pavilion, although the original layout remains easily readable. Access has also been knocked through between the first floor south-west classroom and the adjacent teacher’s room. A few classrooms have had suspended ceilings inserted. The majority of internal doors are original; those that have been renewed are mainly to the pavilions.

The second floor housed further classrooms and a teacher’s room to the south, while the machine drawing room, art room and a further cloakroom and teacher’s room sat to the north. These rooms are accessed via corridors which run to the either side of the double-height hall, with tiles up to dado height and windows overlooking the hall space (both now painted over). The wall between the corridor and the art room to the north has been renewed, while those between the south corridor and its rooms are original glazed partitions. Walls between the rooms to the south side of this floor are solid. The teacher's room to the west retains an elaborate corner sink with cast-iron dragon corbels.

The west end of the hall space is floored over. Although this feature is not depicted on plans, it may be original or early due to the matching segmental-headed door openings accessing the corridors. It also has a matching part-glazed partition overlooking the hall (now painted over), although this may have originated from the first floor stage. The east end houses the balcony which overlooked the first floor hall. This has decorative scrolled and twisted wrought iron balustrading. The oculus to this end retains its stained glass with foliage, geometric and Tudor rose designs, with projecting wooden tracery incorporating the shapes of Flemish gables. It is possible to see the arch-braced roof structure. This has iron cross beams on shaped corbels which utilise decorative flower-shaped bolts and washers. A solid wood panelled, ceiling height partition lines up with the glazed partition separating the east and west side of the hall on the first floor. Clerestory windows run the length of the hall on both sides.
The basement sits to the west end of the building, accessed via the north. This houses numerous rooms including the boiler room, coal room with chute, as well as rooms to the west divided from the corridor to the east by glazed partitions. One of these rooms has numerous sinks running along the west wall. Windows all remain in-situ, although often appearing blocked externally.

There are two dumb waiters running the height of the building; one sits to the south-east and one to the north-west. The former retains its machinery; the condition of the latter is not known, although it is presumed to survive.

Varna Street school was constructed in 1896-7 to designs by the prominent local architects Potts, Son and Pickup. It was number 31 of 40 schools constructed by the Manchester School Board as a result of a competition in which five or six hundred architects took part. The construction cost laid down within the competition conditions was £9 per head; the entire school, ready for occupation, was completed for a little over this sum. The school was intended to hold 2000 pupils, with 1500 students (900 boys and 600 girls) in the main block and 500 infants in a separate building, therefore becoming ‘the largest school in Lancashire’. Girls’ classrooms were on the ground floor and boys’ classrooms on the first floor. Fifteen classrooms were provided to hold 60 children each, with eight designed to hold 84 each, but ‘capable of division by partitions.’ The second floor was designed to house a large drawing school and a room for machine drawing, as well as additional classrooms.

The school was featured in ‘The Builder’ on its opening, and was later featured in Felix Clay’s 1902 book ‘Modern School Buildings’. Here it is described as an interesting and successful school, praised for its low cost factory-inspired construction which allowed for the absence of internal walls. It was also noted for the inclusion of instruction rooms found in German, but not normally English, schools. Past pupils include the late Davy Jones, lead singer of pop group The Monkees.

The footprint has remained largely unchanged since the 2nd edition OS map of 1908. The infants block however was originally rectangular plan, with the projections to the west added some time after 1938. Some toilets attached to the north boundary wall, and the wall dividing the girls’ and boy’s section of the playground to the east and west of the main block, were also removed after this date.

The buildings have remained in school use, although at the time of writing it was imminently due to close. The memorial stone of 1896 has been removed to the site of the new school.

* Design: for its innovative and lauded adaptation of industrial-inspired construction methods for school use, of an impressive form and scale that nodded to the surrounding mills and is crowned with shaped gables;
* Socio-historic interest: the scale of the school provides palpable evidence of the endeavours of the Manchester School Board to provide maximum social impact in an industrial area;
* Degree of survival: the majority of fixtures and fittings remain in situ, including evidence of specialist teaching rooms and figurative stained glass which demonstrates the sense of civic pride embodied in Board School construction.
* Rarity: as one of only seven surviving schools of the original 40 constructed by the notable Manchester Board, with the additional interest of being the only surviving three-storey example.