Church of St Mary the Virgin, Including Boundary Wall & Railings 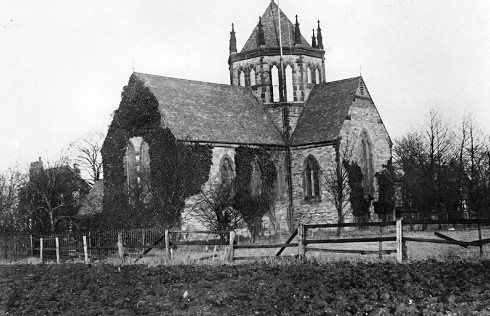 EXTERIOR: the church's windows contain diamond-patterned leaded glazing and some stained glass, and most have plate tracery. All the windows have quoined ashlar surrounds; quoining also exists to the building's corners. The nave and transepts are tall and of the same height; they each also all have a tiny section of half-timberwork and louvred vents to their gable apexes. A red sandstone ashlar band runs around the church at a height of just below the sills of the nave windows.

The west end incorporates paired, trefoil-arched lancets that form the west window, and which are now largely hidden from view by the attached, late-C20 church hall and walkway extension. The nave is lit by three tall windows on each north and south side, which are formed of paired trefoil-arched lancets with a quatrefoil roundel above. A gabled north-west porch has a Gothic-arched doorway with recessed, timber double-doors with a solid tympanum above incorporating the inscription 'PEACE BE WITHIN THY WALLS' and containing a small glazed quatrefoil and a projecting lantern overhead. Attached to the south side of the nave is a single-storey, flat-roofed choir vestry of 1952, constructed in the same materials as the main body of the church and incorporating a large, 9-light mullioned window to the right of centre. The choir vestry was erected in memory of those of the parish killed during WWII.

Both transepts are lit on the west side by windows in the same style as those to the nave, whilst the main windows lighting the transepts' north and south walls respectively are taller versions of the nave windows. The north transept incorporates a small square bell cote that rises from the north-east corner and has cusped belfry openings with horizontal louvres, carved crocketed capitals to each corner, and a pyramidal roof. A large, but squat octagonal crossing tower is lit by paired trefoil-arched lancet windows (those to the angled corners are taller) and has an eaves cornice, angle pinnacles and a pyramidal roof.

The chancel is lit at the eastern end on each north and south side by a cinquefoil-arched lancet that rises above the roofline underneath a small gable; that to the north side incorporates a small, stone chimneystack to one side. Most of the chancel's north wall is concealed by a vestry with a lean-to roof that incorporates a half-gablet to the east return. The vestry has a shouldered doorway to the centre of the north wall, which is flanked by two square-headed windows to each side. The chancel's south wall is largely concealed by a lower, lean-to organ chamber and boiler room projection, which incorporates a plain doorway and lancet window to the south side, and a small, square-headed window to the east return. Rising from the roof of the chancel on this side is a brick chimneystack. The chancel's east wall incorporates an inscribed foundation stone, which is set to the lower part of the wall and incorporates a roundel containing a carved Alisee Patee cross. The east window above is formed by five stepped lancets; the central three of which are not full-height as would be expected, due to the presence of an inscribed consecration stone that denotes the location of the internal reredos.

Attached to the west end of the church via an enclosed gallery corridor is a single-storey church hall of 1990, constructed of reconstituted stone with a pitched, brown-tile roof and a main entrance located on the south side, which is not of special interest.

INTERIOR: internally the church contains parquet floors to the nave, transepts and choir stalls, and an encaustic tiled floor to the rest of the chancel and altar. The walls are plastered, apart from in the chancel, where they are of exposed ashlar, and in the crossing lantern, which is of exposed brick set upon an ashlar collar. The full-height arches underneath the crossing, which lead into the chancel, nave and transepts are all of red sandstone ashlar and incorporate simplified Early English capitals in yellow sandstone. A stringcourse runs around the nave and transepts, beneath the windows, and conceals a gas pipe.

The internal north-west entrance doors have been replaced with fully glazed versions installed in 2000 to celebrate the millennium. Also inserted at the western end of the nave are built-in cupboards and a partially-glazed, narthex-style screen installed in c1998. The nave is lit by three windows to each north and south wall: one of the windows in the south wall depicts the Parable of the Talents (1921), whilst another depicts Jesus Christ as the Good Shepherd (1934). The north wall contains a window depicting Christ healing followers, and the west window (1926) depicts scenes of Christ's ministry.

The nave roof is formed by a series of arch-braced roof trusses (the top parts of which are concealed by the ceiling) supported on sandstone corbels and forming shallow trefoil-arched shapes. The chancel and transepts contain similarly styled trusses, each with the addition of two further, shallow cusps. All incorporate visible rafters and side purlins, and applied timbers to the ceiling.

A 4-panel door in the east wall of the north transept leads into a cupboard accessing the bell cote: although the bell ropes are no longer present, the 1899 tubular bells by Harrington of Coventry remain in situ in the cote. An adjacent 4-panel door leads into two small rooms that form the vestry, and which contain some later built-in cupboards and a partly-glazed, panelled screen containing a door that leads into the chancel. A door in the west wall of the south transept leads into the choir vestry, which contains a timber plaque commemorating its construction and the names of those of the parish lost during WWII.

Flanking the chancel arch on the north side is a stone pulpit with carved foliate decoration and pierced quatrefoil roundels that was brought in from another church, whilst flanking the arch on the south side is a free-standing eagle lectern. The chancel steps are of marble, along with the altar platform. Plain choir stalls lie to the north and south sides of the chancel, along with an organ to the south side. The organ dates to 1895 and is by the company of Wadsworth & Brother, Manchester and was constructed at a price of £271. It was electrified in 1939 and restored in 1966 and 2007. Further pipes are located in the east wall of the south transept. The church's original stone font has been removed and has now been replaced by a simple, slender hexagonal timber font containing a copper bowl, which is located in the chancel. In front of the altar are timber altar rails formed of cusped ogee arches with carved spandrels and supporting columns with foliated capitals. The altar is a simple wooden trestle-table and set behind is a tall wooden, canopied reredos with carved figures and gilded lettering reading ':holy: :holy: :holy: :till: :he: :come:' from Corinthians. Five stained-glass lancets by Bennett of Old Trafford form the east window (1901); those to the centre are set higher and are stepped above the reredos. The lancets depict Jesus Christ as the light of the world, along with St Mary, Archangel Gabriel, the Sower and the Reaper.

The Church of St Mary the Virgin was constructed in 1889-90 to the designs of George Truefitt who won a RIBA competition to design the building in 1887. The foundation stone was laid on 13 July 1889 by Mrs Moorhouse, wife of the Bishop of Manchester, and the church was consecrated by the Bishop the following year on 23 June 1890. The building of the church, which cost £4000, was mostly funded by bequests from three members of the local Norreys family: Robert Norreys and his sisters, Mary Norreys and Isabella Bowers, and is dedicated in their memory, as all three died before work commenced. The land for the church was also provided by Robert Norreys and donated after his death by his nephew. Many of the church's fixtures and furnishings were added later as funding allowed, and electric lighting was installed in 1925. A choir vestry was added in 1952 and dedicated as a war memorial to those of the parish lost in WWII. A church hall was added in 1990.

George Truefitt (1824-1902) is a nationally recognised architect who trained under the Gothic revivalist L.N. Cottingham and is included in the Oxford Dictionary of National Biography. Truefitt designed a wide variety of buildings during his career, including a number of churches, and he published 'Designs for Country Churches' in 1850, promoting the concept of new, original Gothic designs rather than copying medieval examples. His principal patron was the banker, William Cunliffe Brooks (1819-1900), for whom he designed a number of buildings in Greater Manchester, many of which are listed.

The Church of St Mary the Virgin, with surrounding boundary walls and railings, is designated at Grade II for the following principal reasons:

* Architect: it was designed by the notable mid-late C19 architect, George Truefitt and is a good example of his later work;

* Intactness: the church is little altered and retains its historic character and architectural integrity;

* Interior quality: the interior's elegant simplicity of design incorporates a striking east window and a crossing lantern and crossing arches that combine to create a dramatic sense of space belying the church's small size.