A Grade II Listed Building in Weaste and Seedley, Salford 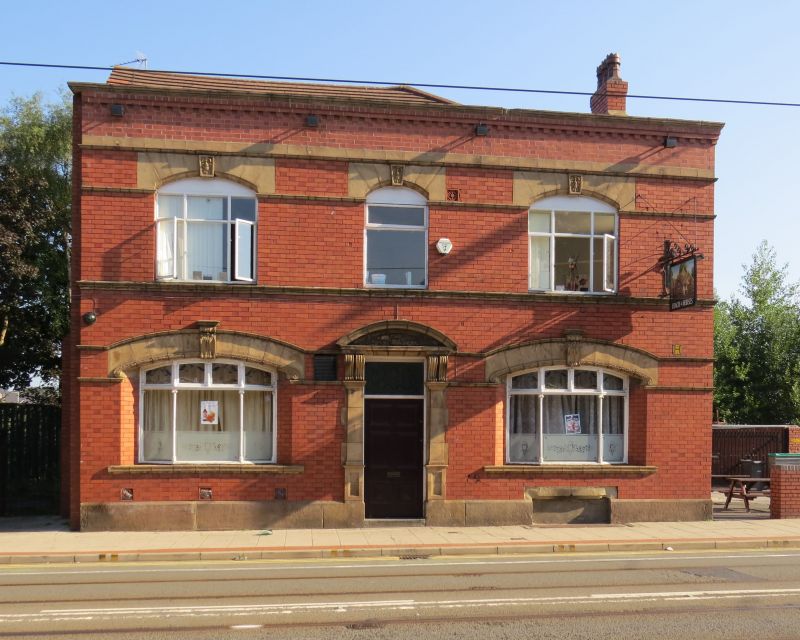 EXTERIOR: Front (south-west) elevation: The front elevation is of three bays and is set upon a stone plinth. To the centre of the ground floor is a doorway with a stone surround incorporating flanking columns set upon carved bases and a segmented pediment supported by paired, carved consoles with a recessed tympanum containing carved decoration. The doorway contains a six-panel door with raised pyramidal lower panels and a stained glass overlight above. The two outer bays have large, recessed canted bay windows set within flush surrounds incorporating segmental-arched stone heads with carved consoles acting as keystones and a decorative bay-leaf band to the lower part. The windows appear to be of painted cast-iron and have slender mullions with decorative capitals, dentil bands, and stained-glass upper panels incorporating Art Nouveau-style designs. The lower panels are much larger and incorporate later, decorative frosted glass. Two slender stringcourses run into the window heads in the style of continuous hoodmoulds and carry around to the south-east elevation. The first floor has three windows with replaced glazing; those to the outer bays are larger. Each window has a stone head composed of voussoirs with a decorative, carved keystone and set between two stringcourses. The roof is hidden from view by a parapet topped by a dentil cornice.

North-west elevation: This elevation is blank with no door or window openings and has near full-height brick buttresses. Modern, gold lettering signage reading 'COACH & HORSES' exists to the far right of the elevation.

South-east elevation: This elevation originally faced on to a short street lined with terraced houses known as Robinsons Buildings, but now faces a car park serving the pub. The elevation is similarly styled to the front elevation and is also of three bays with an additional, flat-roofed bay (containing the Smoke Room and toilets) to the ground floor, which projects beyond the rear wall. The main entrance is set to bay 3 and is identically styled to that to the front elevation, as are the three windows to the remaining ground floor bays. The window to bay 2, lighting the Outdoor Department, is slightly narrower. The first-floor window surrounds are also identically styled to those to the front and the windows retain their original glazing, which incorporate slender mullions and stained-glass upper lights. Two later top-hung casement openings have been inserted into the two windows to the right of the first floor. Rising from the centre of the elevation behind the roof parapet is a tall, shaped, brick stack with stone dressings.

The Coach & Horses public house was constructed in 1913 for the Rochdale & Manor Brewery; its architect is unknown. Originally the pub was surrounded by terraced housing and occupied a corner position at the junction of Eccles New Road and a small street known as Robinson's Buildings. Virtually all of the terraced housing and their associated streets, including Robinson's Buildings, have since been demolished. The site of Robinson's Buildings is now occupied by a car park serving the pub and also by St Luke's School and its grounds behind. The Coach & Horses public house was bought by the Samuel Smiths brewery in 1947.

The Coach & Horses public house is designated at Grade II for the following principal reasons:
* Architectural quality: It has an elegant exterior incorporating a high level of architectural detailing through its use of carved stone dressings, good quality brickwork and windows with decorative cast-ironwork
* Rarity: It is a rare survival of a medium-sized, Edwardian suburban public house that remains virtually unaltered both externally and internally
* Interior quality and survival: The interior retains its original, and increasingly rare, compartmentalised internal arrangements and good quality fixtures and fittings throughout, including extensive tilework, panelled bar servery with a screen incorporating upper sashes with Art Nouveau-style stained glass, fixed-bench seating, doors with etched and frosted glass panels and brass protectors, bell pushes in the lounge for table service, and an intact Outdoor Department