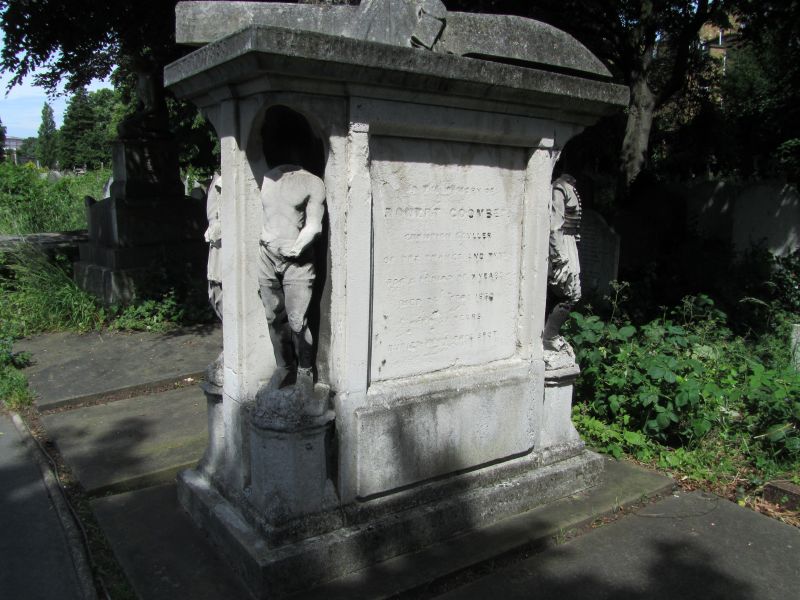 An elongated chest tomb with niches at the four corners, each containing a statue of an oarsman. One is stripped to the waist and wears short trousers; another wears full-length trousers and a jersey top; the others wear the traditional buttoned coats of Thames watermen. All the statues have lost their heads. Resting on the tomb lid is an unturned boat draped with the Doggett's Coat and Badge, the prize given to the winner of the annual rowing race of the same name, which has taken place on the Thames since 1715. Panels to south and north are inscribed in capital letters, reading 'To the memory of / Robert Coombes / champion sculler / of the Thames and Tyne / for a period of seven years / died 25 February 1860 / aged fifty-two years / buried at this spot' and 'This monument was erected by public subscription by the warm friends and admirers of Robert Coombes champion sculler of the Thames and Tyne'. The names of the committee for the erection of the monument are given.

Robert Coombes (1808-1860) was born in Vauxhall and apprenticed at an early age as a waterman on the Thames. After his first sculling victory aged 28 he became one of the principal professional scullers of his time, despite being only 5' 7" and weighing under 9 stone. He competed in the professional championship of England, a race held at infrequent intervals whenever a challenger emerged, winning the title on his second attempt in 1846 (the first time the race was rowed on the Putney to Mortlake course on the Thames). He held the title until 1852, defeating two challengers in the intervening years. Coombes' successes on the Tyne, referred to on his monument, were in a four as well as a scull, rowing stroke in the winning crew in 1842. He was also a rowing coach, training the Oxford boat for the university race in 1840, and the Cambridge boat in 1846, 1849 and 1852. Poverty dogged his later years and he died in Kent Lunatic Asylum in Maidstone. Friends and members of the public paid for his burial and tomb.

* Artistic interest: unusual design: a unique tomb, with four oarsmen and an upturned boat, designed specially to commemorate Robert Coombes, a famous rower;
* Historic interest: once countless boatmen plied their trade on the Thames, and the monument recalls this largely-forgotten occupation;
* Group value: with other listed tombs nearby, in the Grade I-registered Brompton Cemetery.