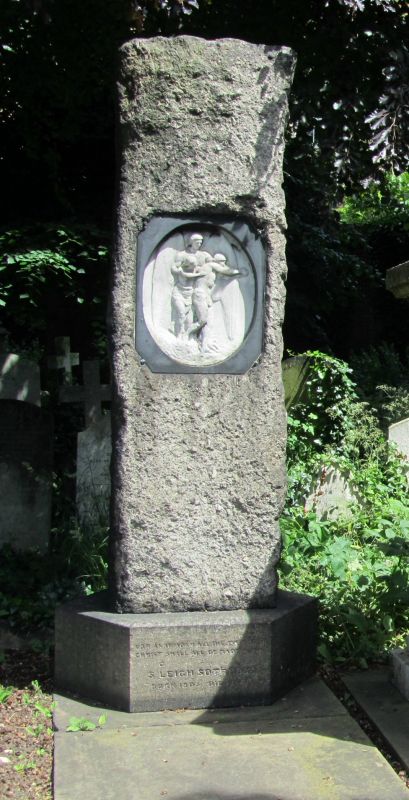 A tall rough-hewn granite stele (approximately 2m high) set on a low hexagonal base with a ledger stone in front. The stele has a round marble relief of an angel guiding a couple to the light, set in a slate surround and originally glazed to protect the marble. The base is inscribed: FOR AS IN ADAM ALL DIE EVEN SO IN/ CHRIST ALL SHALL BE MADE ALIVE/ S. LEIGH SOTHEBY/ BORN 1805 DIED 1861.

Samuel Leigh Sotheby, (1805-1861) Auctioneer, antiquary and author was the third (and last) generation of Sothebys to have been involved in the famous auction house, originally established as booksellers and auctioneers of 'Literary Properties' in 1744 by Samuel Baker (1711-1778). Born in Hampstead Sotheby followed his father, Samuel Sotheby (1771-1842), into the business that his grandfather, John Sotheby (1740-1807), had joined in 1776. Following the bankruptcy of his father in 1836, Sotheby rebuilt the business, now renamed S L Sotheby, becoming the premier auctioneer of antique books. He also published a number of bibliographical works including 'The Typography of the Fifteenth Century' (1845) and 'Principia typographica' (1858) and was a collector of English art. Subject to fainting fits, Sotheby died when, on 16 June 1861, he fell into the River Dart and drowned during a ramble near Buckfastleigh Abbey.

* Design interest: appropriate stele with a neo-classical marble plaque for Samuel Leigh Sotheby, a man with antiquarian interests;
* Historic interest: commemorates the last, and most successful, of the Sotheby family involved with the famous auction house;
* Group value: it is located within the Grade I-registered Brompton Cemetery and has group value with other listed tombs and structures nearby.