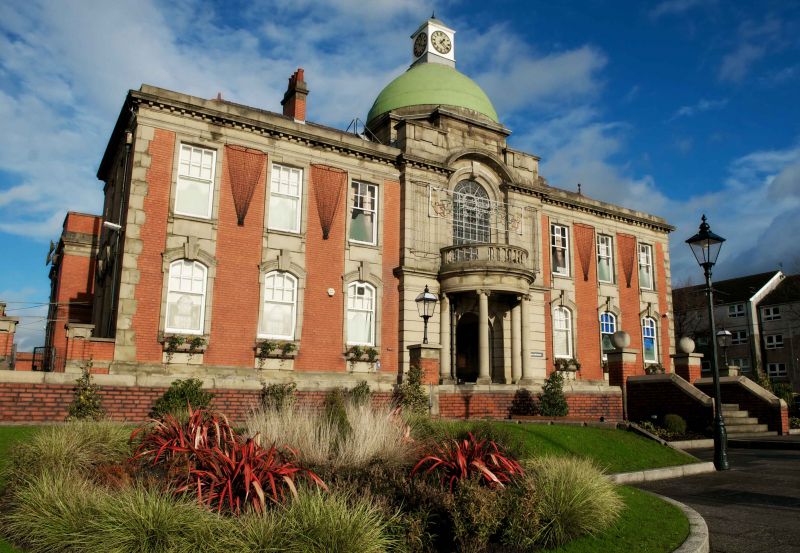 PLAN: the town hall is set back from Middleton Road to the south, with a walled rectangular garden in front of the main elevation, which contains a listed war memorial and is bisected by a path and steps up to the central entrance doorway. The building itself is rectangular in plan, set around a central light well. The front and side ranges are of two storeys with a partial basement.
The front range contains an entrance hall with a double-return staircase and a large stair landing and former council chamber on the first floor. The side ranges have offices opening off long corridors on both floors. The rear range contains offices and storage rooms opening off a long corridor on the ground floor, and a ballroom on the first floor. This has a separate street entrance at the east end opening into an entrance hall with two flights of stairs up to the ballroom, though the ballroom also interconnects internally. It has an east gallery and a west stage.

EXTERIOR: the main elevation, facing south, is of seven bays and two storeys over a basement. It has a projecting stone plinth, stone quoins, entablature, and parapets, with a hipped slate roof behind, with a tall brick ridge stack with stone cap on the left-hand side. The wide, central bay projects slightly and is faced in stone. On the ground floor is a raised, round-headed doorway with four semicircular steps and a semi-circular stone porch with Ionic columns, entablature, and a first-floor balustraded balcony. The entrance has double decorative iron gates opening into a porch with green and white glazed wall tiles and terrazzo flooring. The inner double doors are half-glazed over fielded panels, flanked by timber pilasters, with a segmental-headed overlight with small panes of leaded glass. On the first floor is a tall round-headed window of stained glass with a glazed door opening onto the balcony. There is a stepped parapet with a green dome with a clock lantern. The windows to each side of the central bay are set in stone bands; those on the ground floor have segmental heads with giant keystones, and those on the first floor have flat heads. The window frames are hung sashes with six panes over lower plate glass panes with etching. On the ground floor the left-hand window is etched 'Medical Officer', with a coat of arms in bay two, and 'Surveyor' in bays five, six, and seven. On the first floor there is a coat of arms in bay five.

The secondary public elevation is on the east side, facing onto Garforth Street. The east side range is of two storeys and six bays with the left-hand bay projecting slightly. At the right-hand end is the projecting four-bay gable entrance of the ballroom. The detailing is similar to the main elevation with stone plinth, quoins, entablature, and parapets, with two brick and stone ridge stacks. Similarly, the windows have segmental heads on the ground floor and flat heads on the first floor. On the ground-floor the window in bay two is etched 'Surveyor', and on the first floor the windows in bays two and three are etched 'Clerk', with a coat of arms in bay five and 'Accountant' in bay six. The ground-floor window in bay three has been converted into a doorway beneath the six-pane upper sash, which serves as an overlight. An access ramp has been built in front. The gable entrance has a raised triangular pediment over with stone banding and coping. The slightly projecting outer bays flank a raised pair of double doors on the ground floor, with a flight of steps and a doorcase of stone pilasters supporting an entablature. The doors are panelled with upper lights with decorative timber glazing bars. The outer bays have paired square windows. On the first floor are two hung-sash, flat-headed windows, with smaller outer windows with decorative stone frames. The gable has a large Diocletian window with a giant keystone. All the windows have small-pane leaded glazing.

INTERIOR: the main entrance hall has a Tuscan-columned screen opening into the main hall containing a central staircase which rises in a single flight to a half-landing before splitting into two flights with quarter-pace landings. The staircase has stone balustrading with ramped stone handrails, with geometric stained-glass patterning to the three stair windows. The entrance hall and first-floor landing have terrazzo flooring and moulded cornices to the coffered ceilings. The former council chamber on the first floor of the front range is reached from the stair landing through two sets of double doors with moulded timber architraves with entablatures; the doors have fielded panelling with etched glass to the upper half with geometric glazing bars, and Art Nouveau styled brass door handles. The centre of the room has a shallow, enriched, pendentive domed ceiling supported on four sets of paired Ionic columns, with lower barrel-vaulted bays at each end with dentil cornices. The lower sections of the walls have fielded timber panelling with framed panels above. The central round-arched window has Chadderton's original (unofficial) coat of arms. Many of the other rooms on both the ground and first floors have moulded or dentil cornices, and there are many original doors, the majority with three rows of fielded panels, and moulded eared architraves with pulvinated entablatures. The corridors have terrazzo flooring. The cellar has segmental-arched doorways with timber plank doors. One of the rooms retains a cast-iron range.

The ballroom has a barrel-vaulted ceiling with ribs carved as bay-leaf garlands rising from pilasters, and panels framed by bay-leaf garlands. At the east end is a bow-fronted gallery, lit by the Diocletian window, with two sets of double doors beneath giving access from the two flights of stairs leading up from the separate entrance hall. There are also two sets of double doors in the long, inner wall, opening into the first-floor corridors of the side ranges. The doors are similar to the double doors of the council chamber. At the west end is a stage with an enriched proscenium arch and a barrel-vaulted ceiling. The ballroom, gallery, and stage are enriched with relief plaster urns, festoons, swags, and wreaths.

SUBSIDIARY ITEMS: in front of the main, south façade of the town hall is a rectangular garden. It has low brick walls with chamfered stone coping and square brick piers with stone caps. The original iron railings have been removed; new railings have been installed along the front and east side. In the centre is a wide, stepped pathway flanked by low, stone walls curving between outer and inner piers. The piers have pyramidal stone caps. An inner flight of steps has low brick and stone balustrade walling, and piers with stone ball finials. Similar brick and stone coped walls with square brick piers with stone caps are attached to both sides of the main building façade; the left-hand wall returns towards the road with a low stepped wall interspersed with piers. A similar wall with piers forms a forecourt to the ballroom entrance on Garforth Street.

Chadderton was a rural township which was transformed in the late C19 into a major mill town. The Local Government Act of 1894 replaced the local Board of Health with Chadderton Urban District Council. The eighteen members were responsible for the provision of libraries, baths, parks, streets and lighting, housing, sanitation, and other local aspects of health care. In 1912-13 a large purpose-built council office building was built to designs by architects' practice Taylor & Simister of Oldham, replacing a terrace of four houses. It contained offices, a council chamber, and a ballroom accessible separately. By the 1930s Chadderton was the second most populous urban district in Britain, but municipal borough status was not awarded. Since 1974 Chadderton has formed part of the newly created Metropolitan Borough of Oldham.

The Town Hall formed a civic group with the 1901 police station and court building and the adjacent 1904-5 Carnegie Library situated to its west, both listed at Grade II. In 1921 a war memorial was placed within the walled garden in front of the town hall; also listed at Grade II.

The town hall has recently been refurbished; it is still in use by the council and local population.

Chadderton Town Hall, 1912-13 by architects' practice of Taylor & Simister of Oldham, is designated at Grade II for the following principal reasons:
* Historic Interest: as a symbolic expression of Chadderton's civic identity, built at a time of rapid and extensive urban expansion driven by the construction of numerous cotton mills in this formerly small, agricultural settlement;
* Architectural Interest: as a bold Edwardian Baroque civic building with considerable street presence due to its dramatically massed central bay and large dome surmounted by a clock lantern, use of attractively contrasting red brick and yellow sandstone, and quality of craftmanship;
* Decorative Treatment: for the quality of the interior decoration, notably in the main public areas, including a Tuscan-columned screen and grand stone staircase in the main entrance hall, the timber panelling in the former council chamber, bold Edwardian Baroque plaster enrichment of this room and the ballroom, and stained glass windows, original doors and architraves, terrazzo flooring, and moulded and dentil cornices;
* Group Value: in front of the Town Hall is a low walled and fenced garden which was designed as part of the complex, in which stands Chadderton's listed war memorial, and additionally the building has group value with the police station and court building of 1901 and the public library of 1904-5, both listed at Grade II.