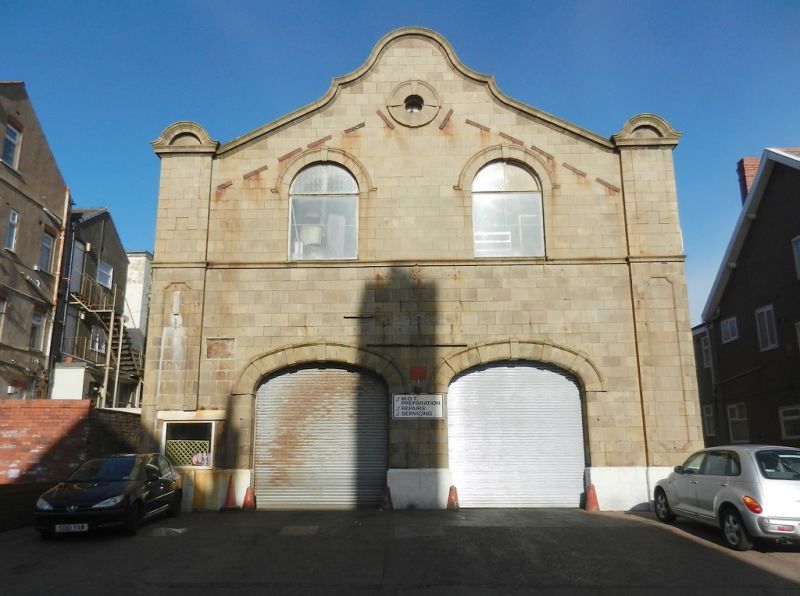 Garage, 1914-15, probably designed by TG Lumb, Son & Walton of Blackpool, originally built to serve the nearby Savoy Hotel. Little altered and remains in use as a garage.

PLAN: The garage has a rectangular plan aligned north-south that runs back from a principal elevation facing King George Avenue. It is enclosed to the west by a terrace of villas fronting Queen's Promenade, by an unnamed lane to the east, and by an alleyway to the north.

EXTERIOR: The garage's roof is hidden from view and its original slate coverings have been replaced by modern concrete tiles. A few of the windows to the side and rear elevations have been blocked-up internally, but most retain their original frames and glazing, which are visible externally. The side and rear elevations are all of red brick with pale buff terracotta dressings, including jigsaw-patterned lintels to the windows.

Front (south) elevation: The wide, 2-bay front elevation is clad with pale buff terracotta and forms the south gable-end of the building. It has a large, shaped gable with large, paired, segmental-arched openings to the ground floor incorporating arched hoodmoulds and raised voussoirs, and with internal roller shutters. Pilaster strips with carved panels at ground floor level and raised aprons to the upper part flank the gable and are surmounted by curved pediments that rise above the roofline. Inserted into the bottom of the left pilaster strip is a later square window with a concrete lintel. To the first floor, and aligned with the openings below, are two large, round-headed windows with hoodmoulds and keystones, and a sill band that runs across the facade. Set to the gable apex is a small keyed oculus. Set in front of the garage is a small tarmac forecourt with two manhole covers, underneath which is a single petrol tank split into two.

East elevation: The east elevation is of 12-bays with metal-framed, 9-light windows to both floors. A doorway exists to the ground floor of bay 1 with a quoined surround, 4-panel door, plain overlight, and a cornice above with decorative, vertical supports. A wide, bricked-up, vehicular opening exists to the ground floor of bays 4 and 5 and has a later inserted doorway with a metal door and grille that leads to a later inserted stair accessing the first floor. Two further, large vehicular openings exist to bays 9 and 10; that to the left has been blocked-up with breezeblocks. The two bays to the far right (north end) of the elevation rise to 3-storeys with second floor windows in the same style as those to the lower floors.

West elevation: This elevation has a number of blocked-up windows to the ground floor, but most of the bays retain their original windows, which share the same styling as those to the east elevation. To the right of centre is a shallow, 2-storey, single-bay projection with blocked-up openings and a door to the ground floor on the south side. Although its original use remains unknown, it could possibly have originally contained toilets or a stair.

Rear (north) elevation: The rear elevation is of 3-bays; the two bays to the left are of 3-storeys, whilst the right bay is of 2-storeys with a lean-to roof. To the ground floor of the left bay is a bricked-up window that retains its original lintel, and to the right bay is a doorway that appears to have lost its original surround and has a replaced door. Windows in the same style as those to the side elevations exist to the first floor of the outer bays and the second floor of the two left bays.

INTERIOR: Internally the garage consists of an enclosed servicing area set just inside the front-left, arched-opening off King George Avenue. This area has a pit to the centre rear and panelled doors to the east wall and canted north-east corner that lead into the main body of the garage. Set to the left side of the servicing area is a modernised, 2-storey (ground and mezzanine level) reception and offices with a series of doors and horizontal windows to the east wall. Set to the rear left of the service area is a doorway with a sliding door that leads to a small, storage basement room. The main body of the garage is accessed through the front-right, arched-opening off King George Avenue and has an inclined floor that slopes upwards towards the rear of the building. To the centre rear of the garage is an original vehicle lift by the Wadsworth Lift Company, Bolton, which remains in working order and retains its original operating and control mechanisms, including the operating handle, which moves between 'ASCEND', 'REST' and 'DESCEND'. The lift has a platform with three timber walls, no ceiling and a metal concertina-style grille door. Set in front of the lift to the left is a large turntable, which is now fixed in place. A large, vehicle-sized recess set to the rear right of the ground floor is served by drains, which run out into the adjacent lane, suggesting that it was perhaps an area originally used for washing guests' cars, or might have originally contained a pit. To the rear left of the ground floor is a timber stair flight, which accesses the first floor. The lower section of the stair has plain square newel posts, a closed string and a horizontal upper rail; the upper section is enclosed. The first floor of the garage is a large open space now used for car storage and as a body shop. A vehicle-sized area to the rear left of the first floor, adjacent to the lift, has been encased with steel and is now used as a spraying room. The garage's roof is boarded and incorporates a series of steel trusses and ties. Inserted towards the northern end of the first floor, alongside the west wall, is a small office and toilet. A later timber stair flight alongside the east wall leads down to the adjacent lane. To the rear right (north-east corner) of the first floor is a staff room with a late C20 kitchen and an enclosed timber stair flight that accesses a disused room above.

Archival research has confirmed that the Savoy Garage was constructed in 1914-15 as the garage for the Savoy Hydro Hotel, which is located on the opposite side of King George Avenue, fronting Queen's Promenade. The hotel and garage are both believed to have been designed by TG Lumb, Son & Walton of Blackpool.

The garage is believed to have originally been used as covered car parking for the hotel, as well as providing maintenance and repairs services. The garage also had a single petrol pump on the forecourt, but this was removed in the late C20.

Savoy Garage is listed at Grade II for the following principal reasons:

* Architectural interest: Externally it possesses a strong level of architectural treatment, including a striking terracotta-clad front elevation incorporating a shaped gable, decorative pilaster strips and paired, arched openings with raised voussoirs
* Date: It is a 2-storey, former hotel garage that dates to the earliest phase of motor car use in England
* Rarity: Unlike many of its contemporaries, this garage has incurred minimal alteration overall and retains a wealth of original features, including an exceptionally rare motor car lift and turntable
* Historic interest: As well as possessing special historic interest derived from its early date, in a wider context the garage is also representative of the impact of the burgeoning motor industry on the development of seaside resorts, such as Blackpool, which became more accessible with the increase in motoring