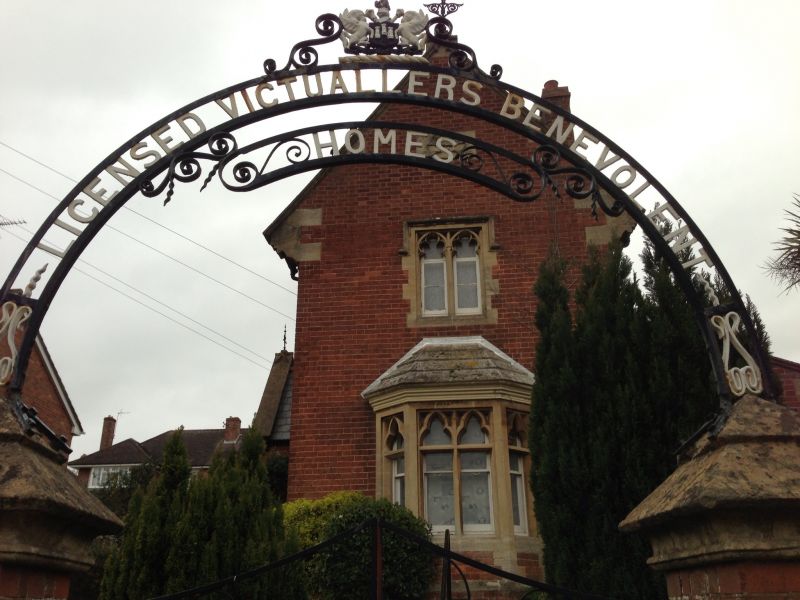 A terrace of four almshouses designed by the architect A. H. Wills in the Gothic Revival style, opened in 1875.

Materials: constructed of brick laid in Flemish bond with stone dressings. The roof is covered in manmade cement fibre tiles.

Plan: Four single-depth almshouses aligned south to north, with the south gable end facing the road. There is a lean-to running the length of the east elevation and two porches to the west (front) elevation. Each pair has staircases to the centre and opposing fireplaces, although the fireplace to the end almshouse (south) is to the east wall, with a bay window to the south wall.

Exterior: the two-storey terrace forms a largely symmetrical composition of the four almshouses arranged as two pairs. There is a central ridge stack, a gable end stack to the north end, and a lateral stack to the south end of the east elevation. The principal (west) elevation consists of two gabled porches, each has stone columns supporting a two-centred arch with foliate carving to the spandrels. The porch doors are late C20 additions. The porches are flanked by three-light windows with cusped heads. To the first floor are gabled dormers with trefoil stonework to the windows which flank inserted square bathroom windows. The south gable faces the road and comprises a four-light canted bay window with cusped heads at ground floor and a two-light window with trefoil heads to the first floor. To the gable is an elaborate date stone with the Exeter coat of arms, for 1873. The symmetrical arrangement of the rear (east) elevation comprises the lean-to to the ground floor with two outshuts. To the first floor are two pairs of six over six sash windows. The north gable is plain.

Subsidiary Features: the almshouses are enclosed by a low brick wall with brick coping. The entrance to the site is denoted by two brick gate piers with stone pyramidal caps supporting an iron archway with the lettering “LICENSED VICTUALLERS BENEVOLENT/HOMES”. To the top of the arch is the Exeter coat of arms framed by iron scrolls.

Almshouses represent a valuable link between medieval and modern approaches to welfare provision and are a tradition that continued through the centuries, remaining strong throughout the C19 and into the C20. The purpose of the almshouse was to provide accommodation for the “deserving” poor and often the founder or benefactor would stipulate what type of person could reside at their almshouse. The benefactor of the almshouses at Union Road was the Exeter Licensed Victuallers Society and these almshouses were intended for ex-publicans and their spouses. The applicant claims that the almshouses were built to demonstrate the benevolent side of the alcohol trade in response to the rise of the Temperance Movement in Exeter in the later C19.

Designed by local architect A. H. Wills, the foundation stone was laid by the Lady Mayoress of Exeter on the 8 August 1872. There is a date stone of 1873 to the south gable, and the first tenants moved in during 1875. The almshouses are depicted on the first edition Ordnance Survey map, published 1890, and labelled as ‘Almshouses’. On the second (1905) and fourth (1932) edition Ordnance Survey maps the building is labelled as ‘Licensed Victuallers’ Asylum (Almshouses)’. The footprint of the building survives largely unaltered, apart from the addition of bathrooms and the removal of the outhouses to the east elevation. The outhouses are not depicted on the fourth edition OS map.