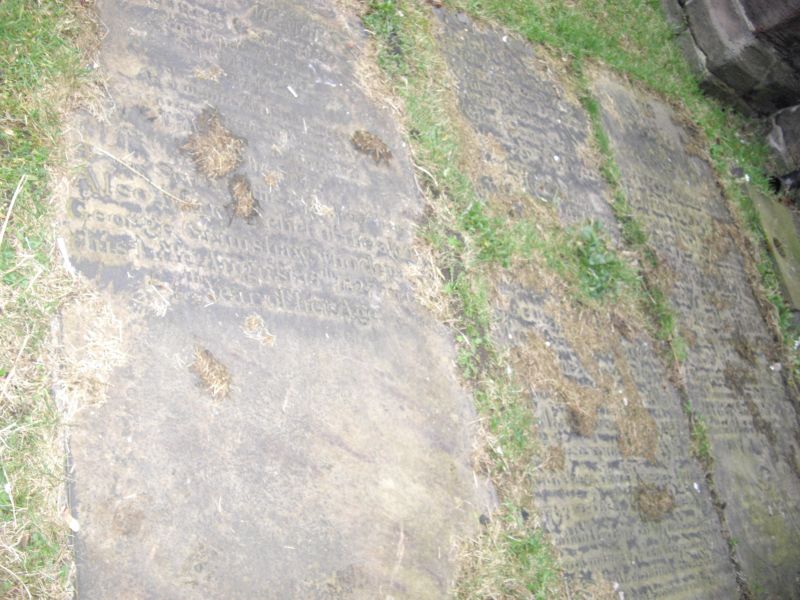 Sandstone, rectangular grave slab with deep incised carving including a border. Large scrolled fleur-de-lys motif to foot of slab. Inscriptions with differently styled lettering; some parts of words included above others or across the border to fit onto slab. Original inscription to top of slab with widely-spaced stylised lettering reads 'I.G/ 1686/ HERE RESTETH THE/ BODY OF IAMES GRIMSHAW/ HVSBAND OF MARY/ GRIMSHAW'. Next inscription starts on same line in smaller lettering and reads 'George his/ Son Sexton of this Church was/ buried April ye 12th 1708 aged 51'. Inscription below in large, widely-spaced lettering reads 'Alfo the Body of/ Mary his Wife who/ Departed this life AP/ 17th 1724'. Inscription in smaller lettering reads 'alfo George/ Son of ye Above George Grim/fhaw was Sexton of this Church/ and buried March ye 14th 1761/ aged 68, Sarah his wife was/ buried April 27th 1750 aged 48'. Italicised verse (added in C18) carved over scrolled part of fleur-de-lys motif to foot of slab reads 'Afflictions sore long time they bore/ Physicians were in vain/ Till God did please Death should them seize/ To ease them of their Pain'.

* Early date: It is an increasingly rare survival of a C17 grave slab with an original inscription that remains fully legible
* Design interest: The slab incorporates an original incised scrolled fleur-de-lys motif and a verse added in the C18 following the grave's re-use by the same family
* Historic interest: It illustrates the extensive history of the St Mary's churchyard and the original Prestwich-cum-Oldham parish, once one of the largest and wealthiest parishes in the country
* Group value: It has group value with the Grade I listed St Mary's Church and the other listed monuments and structures in the St Mary's churchyard