Hearse House in Churchyard of Church of St Mary 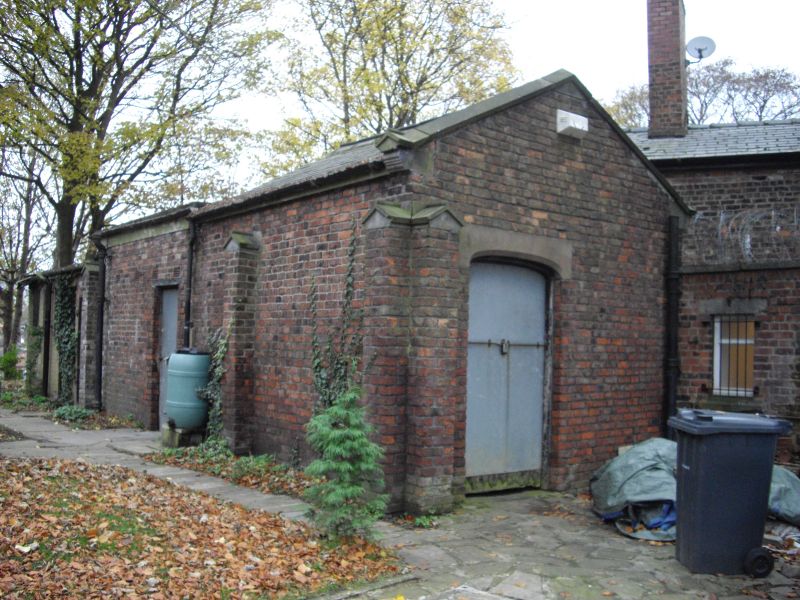 EXTERIOR: Hearse house stands to north-east corner of churchyard to north of St Mary's Church. Slender, near full-height gableted piers to south and east elevations, gableted kneelers to eastern gable end. Pitched roof of rear (western) half of building replaced with a flat roof. East gable end with off-centre doorway with a shallow-arched head and ashlar lintel, and a panelled door with a modern metal covering (an identical doorway and door to the west end have been sealed off but can be observed internally). Later narrow doorway inserted to south elevation of rear section. Mid-late C20, single-storey, flat-roofed toilet block extension attached to west end of hearse house with doorways and small windows to south and west elevations is not of special interest.

INTERIOR: Now used as a store. Divided into two (front and rear halves), both with whitewashed walls and stone sett floors. Front section contains an original timber ledger cupboard fixed to one of the walls, an enclosed brick corner stove and chimneybreast. Stone crest, 1668, of Edward Kenyon built into north wall, which came from his monument in St Mary's Church. Interior also incorporates an incised, late medieval stone tomb slab depicting a floriated cross and shears. Wall-mounted hooks to interior of rear section.

The western section of the churchyard contains, amongst other graves, the unmarked burials of thousands of inmates of the County Asylum Prestwich dating from the mid-C19 to early-C20, although several communal graves for the asylum's attendants and some inmates are marked by grave slabs. In 1801 the hearse house (altered in the mid-late C20) was constructed to the north of the church.

The hearse house in St Mary's churchyard, Prestwich, is designated at Grade II for the following principal reasons:

* Date and survival: It is an important survival of a late Georgian hearse house with a design that is above the purely functional, and which despite some later alteration retains many original features, including stone sett floors and a timber ledger cupboard
* Historic interest: Built into the walls of the interior is a 1668 tomb crest and a medieval tomb slab with incised decoration.
* Historical context: It illustrates the extensive history of the St Mary's churchyard and the original Prestwich-cum-Oldham parish, once one of the largest and wealthiest parishes in the country
* Group value: It has group value with the Grade I listed St Mary's Church and the other listed monuments and structures in the St Mary's churchyard