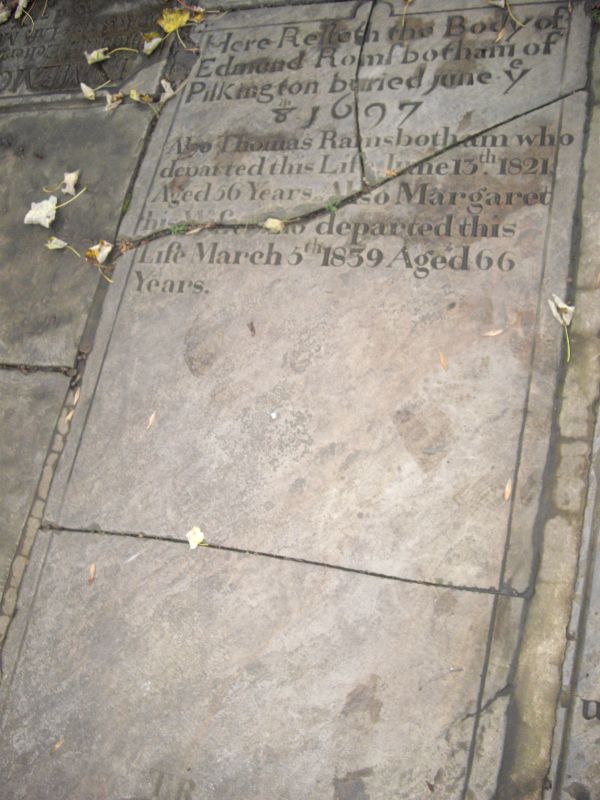 Located in the centre of the main footpath to the north side of St Mary's Church, close to the north-west porch. Large sandstone grave slab with inscriptions to the top part. Deep incised carving including a border incorporating raised semi-circular head to the centre top of the slab above the inscriptions, and scrolled design containing a diamond to the foot of the slab. Initials 'TR' in shallower incised lettering (probably added in the C19) above and left of the scrolled design. Top inscription with widely spaced lettering in Early Modern English reads 'Here Refteth the Body of/ Edmund Romfbotham of/ Pilkington buried june ye/ 8th 1697'. Later inscriptions below added in the C19 read 'Also Thomas Ramsbotham who/ departed this Life June 13th 1821,/ Aged 56 Years. Also Margaret/ his Wife who departed this/ Life March 5th 1839 Aged 66/ Years'.

The Ramsbotham grave slab, c1697, in St Mary's churchyard, Prestwich, is designated at Grade II for the following principal reasons:

* Early date: It is an increasingly rare survival of a C17 grave slab with an original inscription that remains fully legible
* Historic interest: It illustrates the extensive history of the St Mary's churchyard and the original Prestwich-cum-Oldham parish, once one of the largest and wealthiest parishes in the country
* Socio-historic interest: The grave slab was re-used by the same family in the C19 and interestingly its inscriptions demonstrate how family names change and develop over time; the original C17 surname of 'Romsbotham' becoming 'Ramsbotham' by the C19
* Group value: It has group value with the Grade I listed St Mary's Church and the other listed monuments and structures in the St Mary's churchyard