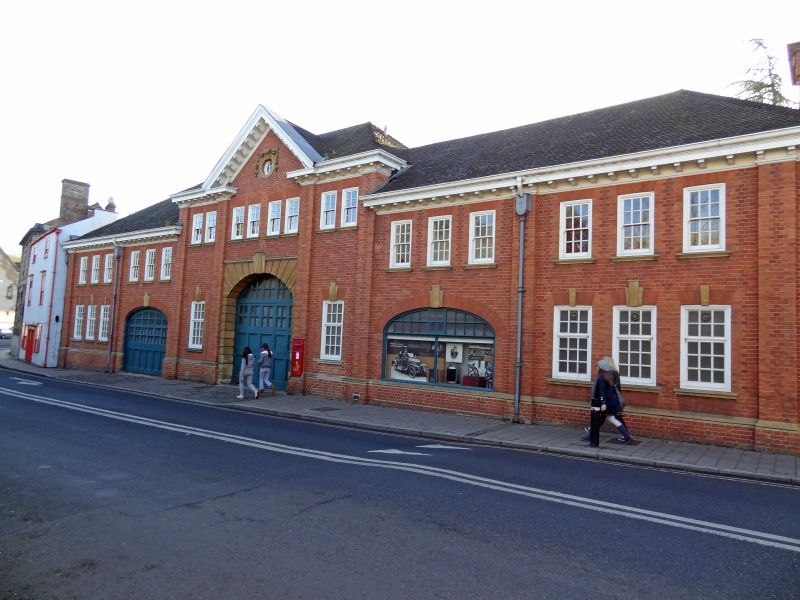 PLAN: as originally built, the main range contained a paint shop, showroom and two offices on the ground floor, with further office space above. The chauffeurs' room occupied the small single-storey block to the north. The central archway led through into a large open parking area, behind which was the old stable block which served as Morris's workshop between 1902 and 1914. This structure has now been demolished, as has the majority of the main building with the exception of the front and side walls and the chauffeurs' room.

EXTERIOR: the main facade to Longwall Street is of two storeys and seven bays, with an additional single-storeyed bay (the chauffeurs' room) to the far right. The style is
that of the early C18, with a sturdy wooden modillion cornice beneath the hipped roof, brick pilasters dividing the bays, and triple keystones above the ground-floor windows; the Oxford Journal (13 July 1910) remarked that 'for the Longwall Street elevation there seems nothing to which even our City Fathers can take exception'. The lower windows are 6/9-pane casements, opening at the top, while the first-floor windows are 6/6-pane sashes. The taller middle three bays form a pedimented centrepiece, with a circular window in a carved surround set in the tympanum. Below, the broad central archway has a segmental head and a channelled stone surround with a triple keystone; the doors themselves have square sunken panels and square-paned overlights. A 'VR' letterbox is set into the right-hand pilaster. The bays on either side of the centrepiece have slightly smaller elliptical-headed openings, again with triple keystones. That to the left is a second doorway which once gave access to the paint shop, while that to the right is a large window, originally looking into the sales room. In the outer bays are downpipes, their rainwater heads bearing the date 1910. The return wall to the north-west, with its corbelled end stack, also survives; the chauffeurs' room beyond is treated as a single-storey continuation of the main facade.

The rear elevation, facing the city wall, was originally a plainer version of the main facade, but has now been wholly rebuilt to a new design in brown brick with lead facings. This is not of special interest.

INTERIOR: apart from simple dado mouldings in the chauffeurs' room, no original internal features survive. The rebuilt interiors are not of special interest.

The Morris Garage at 21 Longwall Street was built in 1909-10 as the Morris Garage, by the architects Tollitt and Lee for Merton College (the landlord) and the Oxford engineer and entrepreneur William Morris. It was on this site in 1912 that the latter assembled the prototype of his first motor car, the Morris Oxford. Production moved to Cowley in 1914, but the building remained in use as company offices (including Morris's personal office) and as a service and distribution centre. It was later used by Blackwell's as a book warehouse. The building was threatened with demolition in the late 1970s, but a campaign to preserve it resulted in the retention of the main facade, behind which a block of student accommodation was built in 1981. The site is now part of New College.

William Richard Morris (1877-1963) rose from humble origins to become the leading British motor manufacturer of his day. Brought up in Oxford, he left school at fifteen and shortly afterwards established his first business, a cycle repair shop run from his parents' house in James Street. In 1901 he set up as a cycle-maker with premises on the High Street, and the following year he moved into motorcycle manufacture, renting from Merton College a set of stables at 100a Holywell Street (immediately behind the present building) for use as his workshop. In 1909 he sold the cycle business and established the Morris Garage. At first he merely sold, hired and repaired cars, but in 1912 he began production of his own Morris Oxford, adopting the more efficient US practice of sourcing parts from external suppliers rather than manufacturing them on site. In 1914 his factory moved to Temple Cowley on the outskirts of Oxford, and after WWI (during which he earned an OBE for manufacturing military equipment) he began producing a second car, the Morris Cowley, whose modest price and great reliability made it a staple of inter-war motoring. By the late 1920s Morris Motors supplied a third of all cars manufactured in Britain. Morris himself, now a multimillionaire, withdrew from direct management of the firm and concentrated on philanthropic schemes, donating a total of £30 million to various medical and educational projects. Created Viscount Nuffield in 1938, he founded Nuffield College, Oxford, established the Nuffield Foundation and endowed the department of medicine at Oxford University. Morris Motors went on to produce the famous MG and Morris Minor cars, eventually merging with Austin Rover in 1952.

The former Morris Garage at 21, Longwall Street is designated at Grade II for the following principal reasons:
* Historic interest: a key site in the development of the British motor industry, being the original home of Morris Motors and the birthplace of the Morris Oxford;
* Architectural interest: a sophisticated neo-Georgian facade built of high-quality materials, presumably intended both to appeal to the firm's wealthy clientele and as a palliative for the presence of a light-industrial site in the middle of Oxford's university enclave;
* Survival of fabric: although the rear part of the building has been rebuilt and its interiors remodelled, the facade's excellent state of preservation, and the survival of other elements such as the return wall and chimney stack, mean that what remains is still of special interest.