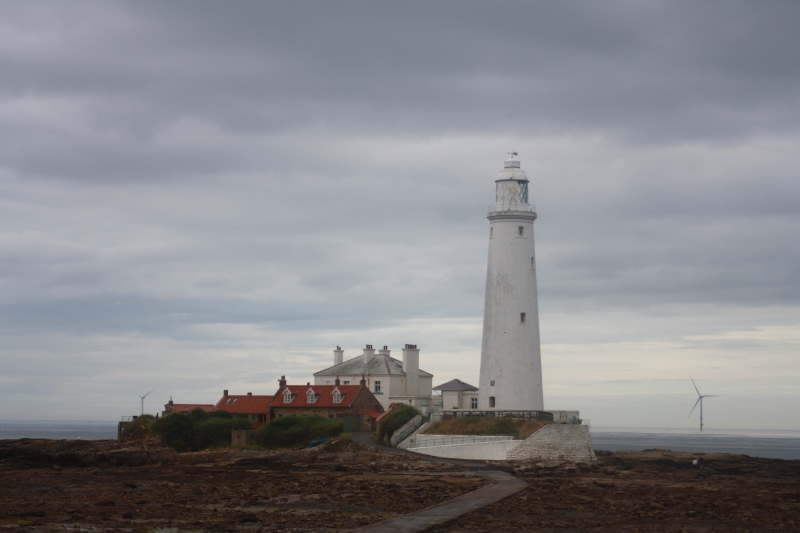 A late C19 Trinity House lighthouse designed by Sir Thomas Matthews, engineer-in-chief to the Trinity House Board; with keepers' cottages, compound and flanking walls situated on St Mary’s Island, a tidal island off Whitley Bay, accessed by a causeway at low tide.

MATERIALS: the lighthouse is of brick with cement render with a metal roof and the lighthouse keepers’ cottages are of Heworth sandstone with slate coverings.

EXTERIOR: white painted tower, 126ft tall with scattered fenestration; all window frames are timber casement replacements. The storm panes of the lantern room have diagonal astragals with hand holds, and there is a domed metal roof surmounted by a weather vane; a gallery with a metal balustrade and decorative finials encircles the lamp room. The Trinity House Coat of Arms is displayed on the west side. The single storey range linking the lighthouse to the keepers’ cottages is a modern replacement. The lighthouse keepers’ cottage is a substantial stone building, now painted white, of two storeys and four bays with prominent quoins. It has a hipped roof of slate with four tall brick chimney stacks. The west elevation has three ground floor windows with an entrance porch occupying bay three, and four windows on the first floor, the left end blocked. Windows and doors have quoined surrounds and all windows are fitted with modern casements. A single storey flat roofed bay with a single window is appended to the south gable end. The east elevation mirrors that of the west.

INTERIOR: the lighthouse has a spiral staircase, comprising 137 steps, with an original handrail of metal stick balusters (now infilled with perspex and with a raised safety rail) occupies the body of the tower. This gives access to the upper service room, which is entered through a part glazed four-panelled door and retains a large wooden and glazed cabinet with a curved front reflecting the shape of the circular tower walls. A metal ladder stair with brass handrails to either side gives access up to the lantern room, which retains the original wind vents and baffles, and has a door giving access to the gallery. At its centre sits the replacement kerosene lantern from Withernsea Lighthouse. The adjacent lighthouse keepers’ cottages have been converted to a visitor centre over both floors leading to the loss of the original two-dwelling plan and most original features. Original features remaining include most of the architraves, one fire-place opening to the eastern cottage and a simple stick baluster staircase to the western cottage.

During the medieval period, St Mary’s or ‘Bait’ Island was occupied by a small chapel dedicated to St. Helen, which burned a light in its sanctuary as a warning to mariners. Although there was a lighthouse on the headland at Tynemouth priory, several large ships were wrecked on or near St Mary’s Island during the C19; therefore a new lighthouse to replace that at Tynemouth was designed for St Mary’s Island by Sir Thomas Matthews C. E., engineer-in-chief to the Trinity House Board. J. L Miller, of Tynemouth, was the builder and Messrs. J. Tweddle and Co., of Newcastle, provided the ironwork used in its construction. Work began in 1896 and the lighthouse was completed in 1898 at a cost of £8000; the kerosene lamp was first lit on 31 August 1898 by the daughter and niece of the builder at a ceremony which saw a party of dignitaries arrive on the island aboard the Trinity House Yacht 'Irene'. These included Elder Brethren of Trinity House, the Chancellor of the Exchequer and the local M.P. After inspecting the apparatus, they proceeded out to sea in 'Irene' to view the new light, and the evening was rounded off with supper and speeches in John Crisp's adjacent cottage. A large dwelling divided axially to form a pair of lighthouse keepers’ cottages, was completed the following year, linked to the lighthouse by a covered walkway.

In 1977, the lighthouse was converted to electricity and the original kerosene lamp was removed to a museum. The lighthouse was decommissioned in 1984, and today, along with the adjacent lighthouse Keepers' Cottage, operates as a museum and visitor centre. In 1984 Trinity House gave the redundant lamp from Withernsea Lighthouse to the museum and, although smaller than the original lamp, it is similar to it in many respects; this lamp was installed in St Mary's Lighthouse in 1988.

This late C19 lighthouse and associated structures are designated at Grade II for the following principal reasons:
* Architectural Interest: the lighthouse is a striking landmark from sea and shore, and complete with keepers' cottages and compound walls, it compares favourably with listed examples of a similar date;
* Designer: designed by Sir Thomas Matthews, engineer-in-chief to the Trinity House Board who designed several lighthouses including the Grade II listed Pendeen lighthouse;
* Historic Interest: greater safety at sea reflected in the construction of this lighthouse in turn facilitated the expansion of North Sea trade as a concomitant of the Industrial revolution;
* Group value: the lighthouse forms a coherent group with a pair of contemporary keepers' cottages, walled compound and flanking walls as well as having a spatial and historic relationship with the adjacent mid C19 stone built fisherman's cottage.