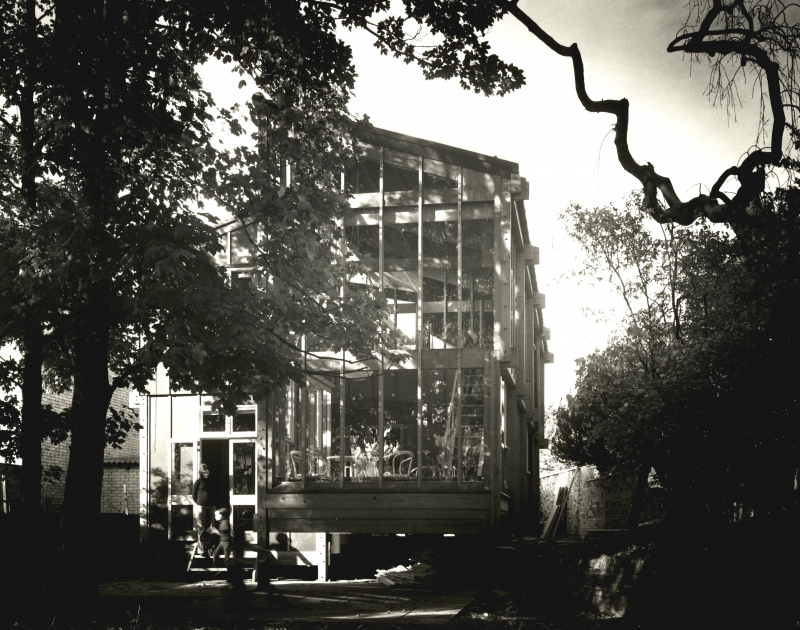 Private house designed in 1971 by Marcial Echenique for himself, working with the engineer P. Dann.

MATERIALS: the house is of modular dry construction: a tanalised (impregnated) Canadian hemlock spruce timber frame with a grid of 3.8m x 3.8m, using composite columns, and with the grid incorporating doors and windows and external Eternit plastic-coated panels, the latter with timber cover strips. Internal panels are of woodwool and smooth buff-coloured Eternit plastic-coated panels. Ceilings are of woodwool slabs. The chipboard floor is carpeted, except for cork tiles in bathrooms and the kitchen. Double glazed; opening windows are white-painted wooden casements. The pitched roof is covered with corrugated blue-black asbestos cement sheets.

PLAN: two-storey detached house, planned on a grid around a single king pin or large post at the centre of the house. The plan is T-shaped, made up of six squares, a central square of four squares, with additional single squares on the front (north) and back (south), extending the east side of the house. The first floor slightly overhangs the ground floor on the east and west sides. The front entrance is reached via the carport. An entrance hall opens onto a kitchen to the right, playroom to the left, and stair and living room ahead. The living room and dining room are open plan, and the dining room has direct access to the garden. The ground floor has a change in levels, with steps down to the dining room (a whole grid square) from the living room (two squares) and kitchen, and is related to the existence of a low brick retaining wall cutting diagonally through the site. The large living room is double-height, with a narrow staircase leading to a library/gallery above. On the first floor, the main bedroom is over the dining room, with children’s bedrooms to the front and a study/ studio on the east side with access to the library/ gallery. The children’s first-floor shower room has been moved to the ground floor, but retains original fittings and indicates the flexibility of the structure and services. The central hallway ends obliquely by the king pin, overlooking the living room via an internal window.

EXTERIOR: the house rests on the ground on short stilts. The slight overhang of the eaves, provided for weathering purposes, gives interest to the silhouette. On the north, east, west and recessed portion of the south façades, the enamelled panelling is punctuated by minimal fenestration. The street (north) façade is reticent, the front door recessed under the protruding upper storey, reached through the carport. The garden (south) façade is dramatic; the raised, projecting living room grid square is glazed on all three sides within the prominent wooden structure, providing views through the house, and out to the garden where a line of mature trees acts as natural shading.

INTERIOR: interior finishes are deliberately simple, with timber predominating and giving a slight green cast, reflected in the colour of the exposed Eternit plastic-coated panels and woodwool slabs. The house is light and open, due to the full-height glazed walls of the living room, the use of glazed panels between the living/dining space and other rooms, and the open-tread stairs. The double-height living room is the principal space. The unglazed portion of the double-height east wall is entirely fitted with bookshelves, their construction carefully expressed. Other rooms are smaller and simpler, with built-in cupboards designed by the architect throughout.

Marcial Echenique was born in Chile, and was a Lecturer in Urbanism in Barcelona before joining Colin St John Wilson as one of his first assistants in 1965. He succeeded Wilson as a lecturer at the Cambridge School of Architecture in 1970 and later gained an international reputation in urban planning, first as a Professor and then as Head of the Martin Centre (originally the Centre for Land Use Planning and Built Form Studies). He was Head of the Department of Architecture at Cambridge in 2004-8, and was awarded an OBE in January 2009. 214 Chesterton Road is Echenique’s only house and is one of a group of low-cost but innovative houses built by architects teaching at Cambridge who were able to benefit from mortgages financed by the university.

The intention behind the design was to experiment with a cheaper form of construction to produce a larger house than could have been achieved for the same cost using traditional construction. This was achieved by savings in building labour costs on site and by the use of lightweight off-the-peg components. The system was also designed for flexibility. The house followed the street frontage, bulk and height of its neighbours, while to the rear it was related to the line of existing sycamore trees, planted in the early 1900s. A first scheme used corrugated asbestos as cladding to the roof and walls but was rejected by the architectural advisory panel to the City Planning Department for ‘aesthetic reasons’. The flat Eternit plastic-coated panels were therefore adopted which allow the construction of the house to be more fully revealed. Eternit plastic-coated panels and woodwool slabs were used to line the interior. The structure requires no painting and little maintenance; Echenique left it entirely exposed and had no paintings on the walls. There were delays while Echenique secured a mortgage for his novel construction, and the house was eventually built in March-June 1972 by A. Bennett and C. Kidd after the architect had secured all the materials. The only alteration has been the moving of a shower room from the first floor to the ground floor, using original fittings and recreating the cork floor, making for a larger first-floor studio and smaller ground-floor playroom.

214 Chesterton Road, designed in 1971 by Marcial Echenique for himself, is designated at Grade II for the following principal reasons:

*Architectural interest: it is an economical and sustainable example of a private house built at a time of rising materials and building labour costs, resulting in a larger house than could have been achieved for the same cost using traditional construction;

*Innovation: it is a structurally creative and experimental house, representing an innovative interpretation of the traditional timber-framed house in its use of light-weight, off-the-peg building components which are visually expressed throughout the building;

*Plan form: it has a fascinating live-work plan exemplified by a double-height living room with book shelving which is accessed via a balcony leading to a small adjacent office.