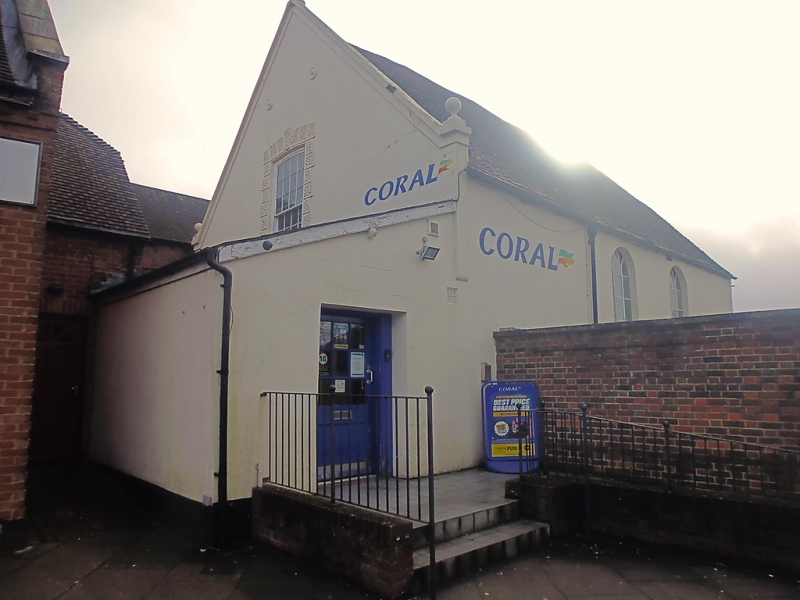 Non-Conformist Chapel, later hall. Dated 1728 in tablet over main entrance, a rebuilding of a chapel of 1671. C20 additions to lower part of front not of special interest. Stuccoed with tiled rear gable and gabled tiled roof. Rectangular on plan. Entrance front has stone coping with kneelers with central urn and side ball finials. Cambered 20-pane sash with vermiculated surround. Under the C20 lean-to extension is a central datestone which reads "Rebuilt ANNO DOM 1728". Below this is the original central round-headed doorcase with keystone, impost blocks and original double leaved door, each with 3 fielded panels and L-hinges. The front elevation now has two further C20 openings at the sides. The side elevations each have two round-headed 15 fixed pane casement windows with Gothick heads, some of which retain coloured glass. The rear elevation has a C20 tile-hung gable and two round-headed openings with C20 casements.
INTERIOR: barrel-vaulted roof supported on each side on three octagonal wooden columns with chamfered bases on stone plinths. Raised dais to rear with panel to centre.
HISTORY: Chichester's oldest Non-Conformist chapel. 1671 Baptist Church on this site rebuilt in 1728. By the early C20 it was a Unitarian Chapel and later a hall. One of the founders of the Baptist Chapel was George Smith, grandfather of the three Smith brothers known as the Chichester painters. The painters' father, William, was Minister of the Eastgate Chapel.