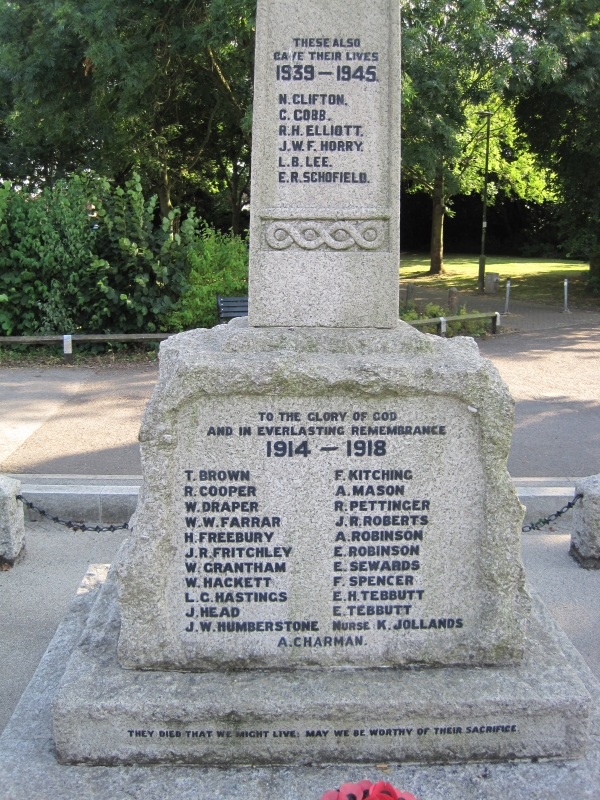 The memorial, in granite, has a Celtic cross-head on a tapering shaft. That rises from a rough plinth, the front face a smooth panel carrying the inscription TO THE GLORY OF GOD/ AND IN EVERLASTING REMEMBRANCE/ 1914-1918 (23 names). On the upper stage of a shallow two-step base is THEY DIED THAT WE MAY LIVE. MAY WE BE WORTHY OF THEIR SACRIFICE. The base of the shaft is inscribed THESE ALSO GAVE THEIR LIVES 1939-1945 (6 names). The memorial is defined by stumpy stone pillars carrying a chain.

In 2015 the surrounds of the memorial were reworked, and an outer concrete kerb and paving was installed.

Pursuant to s1 (5) of the Planning (Listed Buildings and Conservation Areas) Act 1990 (‘the Act’) it is declared that the concrete kerb and paving are not of special architectural or historic interest. These are excluded from the listing.

The war memorial, in remembrance of men from Misterton lost in the First World War, was unveiled on 8 January 1922 by Brig Gen Sir Joseph Laycock, KCMG, DSO, of Wiseton Hall, a notable Nottinghamshire soldier and Olympian. It was built by Mr GH Spilman at a cost of £300. The names of the parishioners who died in the Second World War were added after 1945.

Misterton War Memorial is listed at Grade II for the following principal reason
* Historic interest: as an eloquent witness to the tragic impact of world events on the local community, and the sacrifice it made in the conflicts of the C20.