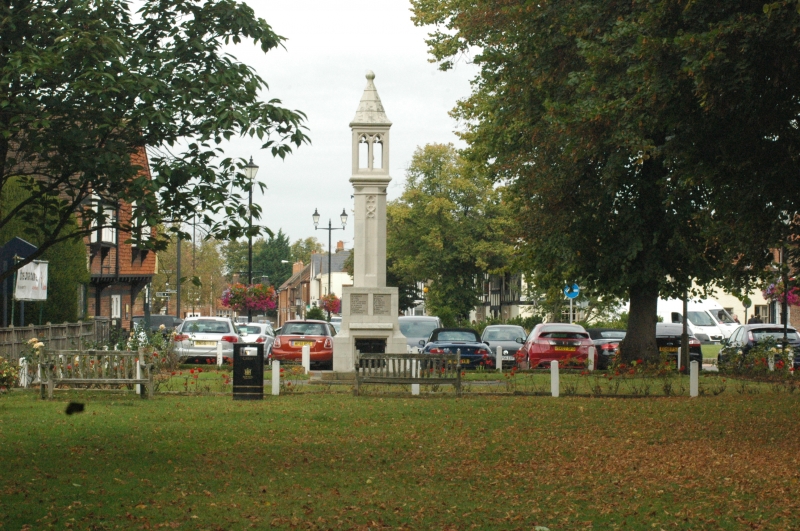 War memorial, 1921 by JO Cheadle, built by Wooldridge and Simpson; moved to its present location in 1936.

War memorial, 1921 by JO Cheadle, built by Wooldridge and Simpson; moved to its present location in 1936.

DESCRIPTION: the memorial takes the form of a 'lanterne des morts', recalling the medieval stone cemetery lanterns of central and southern France. A two-stage plinth, raised atop a pair of York stone steps, supports an octagonal column with a roofed Calvary in high relief on its northern face and simple blind tracery to the south, east and west. This in turn is surmounted by a square Gothic lantern with a broached pyramidal cap and a ball finial. It contains a single electric light - replacing the original four - in a frosted glass shade.

The names of the 80 dead of the First World War are inscribed in leaded lettering on eight sunken granite panels around the upper plinth. Above the panels is a carved inscription: TO THE GLORIOUS MEMORY OF THE BRAVE & TRUE / WHO GAVE THEIR LIVES IN THE GREAT WAR 1914 - 1918 / ETERNAL REST GRANT UNTO THEM O LORD / AND LET LIGHT PERPETUAL SHINE UPON THEM. A further 60 names from the Second World War are inscribed on a bronze panel on the north side of the lower plinth. On the south side is a recess containing small double-leaf oak doors with ornamental hinges, presumably giving access to the electrical connection for the light.

The paving and post-and-chain fence that surround the memorial are not original and are excluded from the listing.

The aftermath of the First World War saw a great national impetus to commemorate those who had given their lives for their country in such vast numbers. War memorials, of many different designs, were erected in communities across the nation. The majority had the names of the fallen inscribed upon them in some manner; in most cases the dead of the First World War - and occasionally those of other conflicts - were later added. They stand as enduring sites of communal memory, forming the focus of Remembrance Day ceremonies and other commemorations.

Beaconsfield's war memorial was designed by the architect John Oscar Cheadle (1890-1950) and built by the firm of Wooldridge and Simpson. It commemorates the 80 men from the Beaconsfield area who fell during the First World War, and was unveiled in May 1921 by Field Marshal the Lord Grenfell of Butlers Court. Two of the latter's nephews - Captains Riversdale Nonus Grenfell and Francis Octavius Grenfell - twin brothers killed in action with the 9th Royal Lancers - are named on the memorial, and Lord Grenfell himself was later buried in the adjacent churchyard.

The choice of a lantern design may have been influenced by the memorial's original position at the crossroads in the centre of the Old Town, formerly the site of a street lamp . It was moved to its present location - about 35 metres further south, alongside the parish church in Windsor End - in 1936, when the crossroads became a roundabout. The present paving and fence (not included in the listing) replace the original triangular paved surround marked out by three stone bollards. The names of a further 60 casualties from the Second World War, including at least three more pairs of brothers, were added to the memorial in 1950.

Beaconsfield war memorial, erected in 1921 to the designs of JO Cheadle, is listed Grade II for the following principal reasons:
* Historic interest: as an eloquent witness to the tragic impacts of world events on this community, and the sacrifices it made in the conflicts of the C20;
* Architectural interest: for its unusual and accomplished Gothic Revival design, based on a medieval French 'lanterne des morts';
* Group value: with numerous listed buildings in the centre of Beaconsfield Old Town, including St Mary and All Saints' Church, Lloyds Bank and the Saracen's Head Hotel.