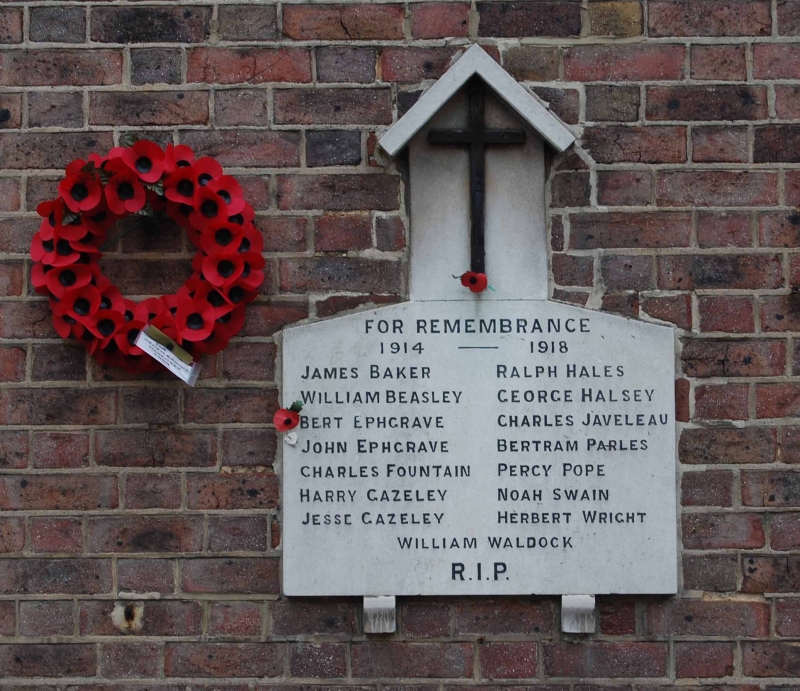 War memorial plaque, unveiled 1920 by Bishop of St Albans, Dr Michael Furse. The dwellings which form 80 and 82 Sopwell Lane are excluded from the listing.

*Pursuant to s.1 (5A) of the Planning (Listed Buildings and Conservation Areas) Act 1990 (‘the Act’) it is declared that the dwelling which form 80 and 82 Sopwell Lane are not of special architectural or historic interest.

The concept of commemorating war dead did not develop to any great extent until towards the end of the C19. Prior to then memorials were rare and mainly dedicated to individual officers, or sometimes regiments. The first large-scale erection of war memorials dedicated to the ordinary soldier followed the Second Boer War of 1899-1902, which was the first major war following reforms to the British Army which led to regiments being recruited from local communities and with volunteer soldiers. However, it was the aftermath of the First World War that was the great age of memorial building, both as a result of the huge impact the loss of three quarters of a million British lives had on communities and the official policy of not repatriating the dead, which meant that the memorials provided the main focus of the grief felt at this great loss.

The war memorial attached to 80 and 82 Sopwell Lane is one of forty war memorials in St Albans, dedicated to those who fell in the First World War and one of ten mounted on houses in the Abbey Parish of St Albans. Those mounted on houses were unveiled in 1920 and 1921 to commemorate more then 110 men who came from a small group of streets clustered around the Abbey. Those who went to war from these streets were men of the parish of St Albans Abbey. It is not clear where the idea for the St Albans street plaques came from but Canon George Glossop, who served the abbey for 40 years until 1925 certainly promoted the plan. Locally they are known as The Canon Glossop Memorials. Records indicate that Abbey curate, The Rev Harry Evans, made street collections to fund the scheme. Generally plaques are mounted on a house from which a man was lost. Following the dedication of the first memorial in Albert Street in the spring of 1920, the next three plaques in Bardwell Road, Pageant Road and Sopwell Lane were dedicated in summer the same year by the Bishop of St Albans, Dr Michael Furse.

The war memorial plaque, attached to 80 and 82 Sopwell Lane, is listed at Grade II for the following principal reasons:
* Historic interest: as an eloquent witness to the tragic impacts of world events on this community, and the sacrifices it made in the First World War;
* Rarity: as one of a rare group of commemorative plaques, which survive well and which offer a relatively private memorial compared to the usual more public monuments often placed in prominent locations;
* Group value: as one of eight surviving memorials forming a significant and rare group.