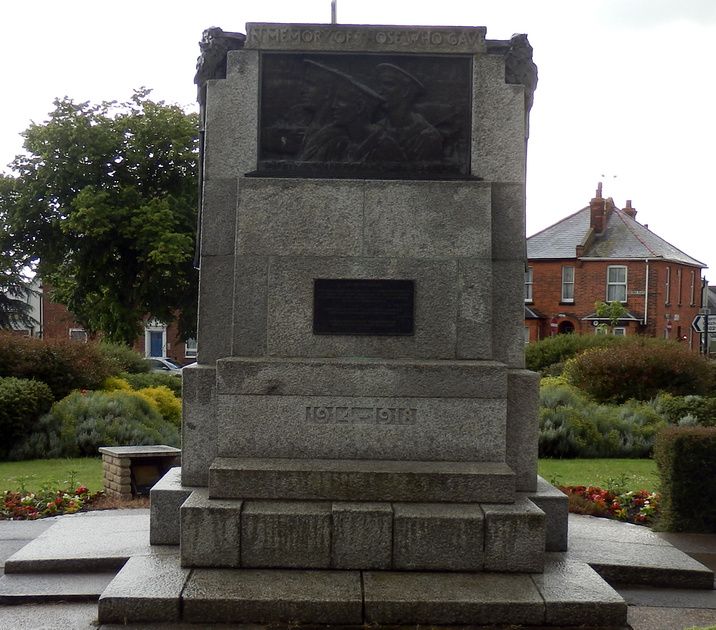 Church of England Parish: Brightlingsea All Saints with St James

The memorial consists of a cenotaph, a massive rectangular block of granite, stepped out at the base, set at the crossing of stone paved cruciform paths. Towards the top of the broad west and east faces of the cenotaph are rectangular bronze plaques, each with a relief design representing the heads of three servicemen in profile. On the north and south sides are tall narrow bronze plaques, surmounted by wreaths, on which are inscribed the names of those who died; an additional small plaque carries the names of those who lost their lives in the Second World War. At the top of the east and west faces is a raised carved inscription which reads: IN MEMORY OF THOSE WHO GAVE /THEIR LIVES IN THE GREAT WAR. As the cruciform paths approach the cenotaph they are stepped gradually, rising to its base. The setting for the whole is a small, wedge shaped garden; other structures that form part of the garden, its surrounding wall, gates, and benches, are not listed, which is shown on the map.

The War memorial in Brightlingsea was unveiled in 1921, at a ceremony attended by Brigadier General F W Towsey. It was designed by Richard Reginald Goulden (1876-1932), who had himself served with the Royal Engineers in the First World War. In 1916 he was wounded, and returned to England, where he served in Brightlingsea and London for the remainder of the war. Goulden specialised in public sculpture, particularly memorials, several of which are listed. An early photograph shows the Brightlingsea memorial sited at the crossing of paths within a small, wedge-shaped garden, surrounded by roads and defined by a newly planted hedge. The hedge has since been replaced by a low wall, and bench seats have been added either side of the entrance to the west. The memorial was rededicated in May 1993.

The War Memorial in Brightlingsea, Essex is listed at Grade II for the following principal reasons:

* Design: the monumental design of the memorial at Brightlingsea, by the noted sculptor Richard Reginald Goulden, has considerable impact, enhanced by the cruciform paths that form part of the design.

* Historic interest: as an eloquent witness to the tragic impacts of world events on this community, and the sacrifices it has made in the conflicts of the C20.