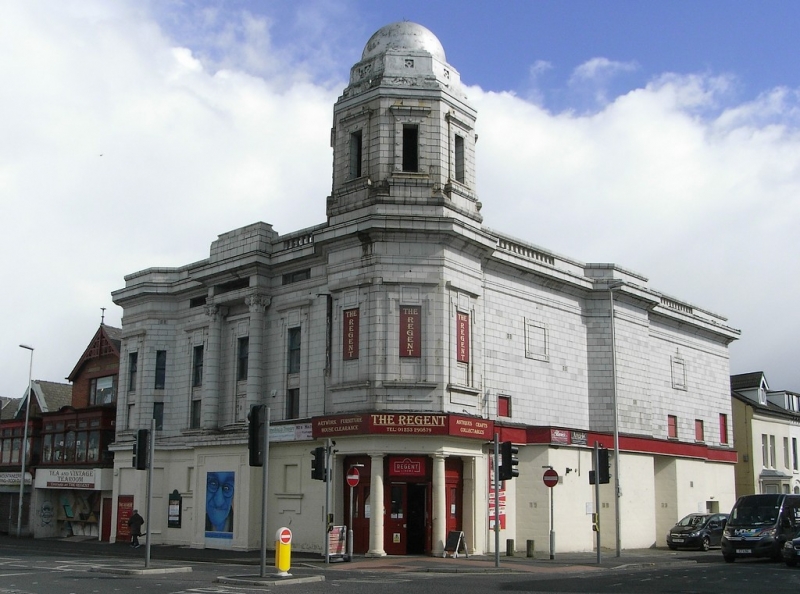 Cinema, 1921 by Lumb and Watson. The contractors were Messrs. Chadwick Bros of Layton and Messrs. J. Fielding & Sons carried out the reinforced concrete work. Messrs. Claughton of Leeds supplied the furnishings. Neo-Baroque Style with Neo-Grec detailing.

Cinema, 1921 by Lumb and Walton. The contractors were Messrs. Chadwick Bros of Layton and Messrs. J. Fielding and Sons carried out the reinforced concrete work. Messrs. Claughton of Leeds supplied the furnishings. Neo-Baroque Style with Neo-Grec detailing.

PLAN: roughly rectangular with a corner entrance; ticket office/vestibule with entrance to stalls and staircase to balcony.

EXTERIOR: the building forms a prominent landmark occupying a corner site at the junction of Church Street and Nelson Street with elevations fronting both of these streets and a canted corner bay at their junction. The three-storey elevation is clad in a white-glazed terracotta tile (the ground floor has been overpainted in cream), with Greek detailing and a full entablature. A wide facia runs above the ground floors of the Regent Street elevation, the canted bay and part of the Church Street elevation; an historic photograph depicts a canopy attached to this, now removed. The roof is flat and windows to the upper levels retain original fenestration with lozenge-shaped glazing bars.

Church Street elevation: this has four bays and two storeys; the ground floor has a projecting canted bay window (boarded), the centre bay is a square projection with recessed panels and corner floral motifs and contains a blocked window or door. Alternating with the projecting bays are blind bays bearing recessed squares with projecting sills and apron panels with lozenge motifs below. The full-height upper storey has a tall canted bay window to the left, the sides of which are pierced with narrow lights. The front of the canted bay window and the remaining three first floor windows on this elevation (lighting the balcony stair) are set within tall recessed panels with projecting cornices, surrounds and sills; decoration is in the form of smaller, square and rectangular panels. The third window, in the form of a portico, is framed by a pair of Ionic columns set upon the ground floor projection which carry a projecting segment of the continuous entablature. Above the latter the elevation carries a partially balustraded parapet with raised and thickened central section.

Canted entrance bay: this has marble thresholds and three sets of original double doors framed by Doric columns and pilasters carrying the continuous entablature. Above this is a five-sided element with three windows, each set within similar recessed panels to those described on the Church Street elevation and with the continuous entablature above. Rising above is an octagonal tower pierced by narrow, rectangular window openings with boss-decorated architraves, cornices and projecting sills and aprons. This is surmounted by a domed roof of eight ornate decorative panels.

Regent Street elevation: comprising the west wall of the auditorium, this has seven bays to the ground floor of which three project and are blind, with the exception of the right end bay which houses a stalls fire door; historic photos show that the ground floor of this elevation carried numerous cinema advertisements. The upper parts are blind comprising three bays, the centre bay projecting and the outer two bays with square motifs with raised surrounds and cross decoration. This elevation is completed by a substantial entablature with moulded cornice and a partially balustraded parapet.

Rear elevation: this is largely obscured but with a number of plain door openings with stone lintels and to each end a balcony fire exit.

INTERIOR: the main entrance opens into an octagonal ticket office; it is understood that the original marble floor remains beneath the present carpet. The plaster domed roof with decoration including scrolled and Greek key motifs, is retained in what is considered to be the original interior colour scheme of Wedgewood blue and cream. The original entrance to the stalls has lost its double mahogany doors but to the left is the original dog-leg marble staircase to the balcony, lit by stair windows with original fenestration.

The auditorium largely retains original plaster panels with simple borders and corner bosses to all walls, and a broad, ornate plaster cove serving as a continuous flue for the ventilation system. The ceiling is divided into panels by large structural concrete beams, with applied scrolled decoration, and several undecorated cross beams. At the centre is a large rectangular panel with decorative square plaster motifs; this contains the manual sliding roof originally of glass panels, now replaced in wooden sheets. Some of this plasterwork has suffered damage from water ingress. The blind external canted bays of the auditorium are expressed internally. The proscenium with pilasters remains in place and its upper part has decorative bosses and dentils; above this is a lower cove with a large, central, rectangular panel of a parade of Greek soldiers on horseback. The original orchestra pit is also understood to remain beneath the later floor immediately to the front. The underside of the balcony has plaster panels set between the structural concrete fins that support the balcony. All stalls seating has been removed and the present floor is an early C21 addition; the original horse-shoe rake is retained beneath.

The balcony retains a decorative plaster front with lattice and palmette decoration. A small area of balcony seating is retained to the front left (probably 1950s in date) and within a smaller private secondary balcony to the rear right and the raked floor remains throughout. To the rear right there is an original refreshment 'kiosk' and to each balcony end there is an original fire exit and small WC.

A door at the rear of the balcony gives access to a cast iron staircase leading directly to the projector and lighting rooms and a small store room. Within the projector room there is ladder access to the roof of the cinema. The manual sliding roof is encased within a concrete structure with several rectangular ventilation openings, and it retains metal fixings to facilitate opening.

The Regent Picture House, Blackpool was constructed in 1921 to the designs of Blackpool-based Lumb and Walton. Lumb and Walton also designed Fleetwood Pier (demolished) and the Savoy Hotel & Savoy Garage (Both Grade II). They also designed a number of houses on the Fylde coast, notably in Cleveleys and the Rossall Beach Estate and also undertook work on the Grade II listed Rossall School. The contractors were Messrs. Chadwick Bros of Layton, Messrs. J. Fielding and Sons carried out the reinforced concrete work and Messrs. Claughton of Leeds supplied the furnishings. The promoter and manager of the new building was Mr. Arthur Sellars, a well-known expert in Cinema matters with a wide experience in the entertainment world. The building opened on 17th January 1921 with a ceremony attended by the Mayor and Mayoress, the local MP Alderman A. L. Parkinson and clergy. The opening films were 'The Call of The Road', written and produced by A. E Coleby and 'A Member of Tattersall's from the play by H. Y Browning.

Few cinemas were constructed in England during the last years of the First World War, but by 1920 new ones were opening. The construction of this cinema received much coverage in the local press including The Blackpool Gazette & Herald who described it as handsome and imposing and the ‘last word in the matter of Cinema’. These contemporary reports describe the building: the main entrance opened into a large octagonal vestibule with a dome and ceiling and floored in marble. From here double doors led to the ground floor of the auditorium and a wide marble staircase gave access to the grand circle above. The picture house could seat almost 1200 people with a particularly large balcony accommodating 400. The floor of the latter, constructed of concrete, had one of the largest reinforced concrete beams of the country at a span of 65ft, thus obviating the need for pillars and allowing an uninterrupted view of the screen. The main ceiling had a retractable roof of glass panels. By virtue of its concrete construction, the building was claimed as the most fire-proofed building in Blackpool. It incorporated a state-of-the-art ventilation system which was claimed as one of the most efficient of any cinema at the time; the area beneath the grand circle was ventilated by means of outlets to the ceiling, connected with a powerful electric fan. The upper parts were ventilated by means of a series of outlet gratings in a large cornice running around the hall serving as a continual duct connected to the large fan. The main light fittings are described as having bowls of Italian alabaster, the woodwork was mahogany and the original colour scheme was Wedgewood blue and cream with gold and black carpets.

In 1969, the building was converted to bingo use, and the building subsequently became a pool and snooker hall. In 2012 the cinema was partially restored and several later alterations were reversed.

The former Regent Picture House of 1921 by Lumb & Watson is listed at Grade II for the following principal reasons:
* Completeness of design: a cinema with good spatial and decorative integrity including an auditorium retaining most key features, front of house spaces, and projection and light rooms;
* Architectural quality: a striking landmark with a domed tower, that is well executed and displays external and internal architectural detailing of good quality
* Constructional interest: as an auditorium of reinforced concrete construction that achieved best practice in both fire safety and ventilation.
* Historic interest: a good example of an Edwardian ‘transitional’ cinema of 1921 providing a vehicle for the spread of popular culture to the masses