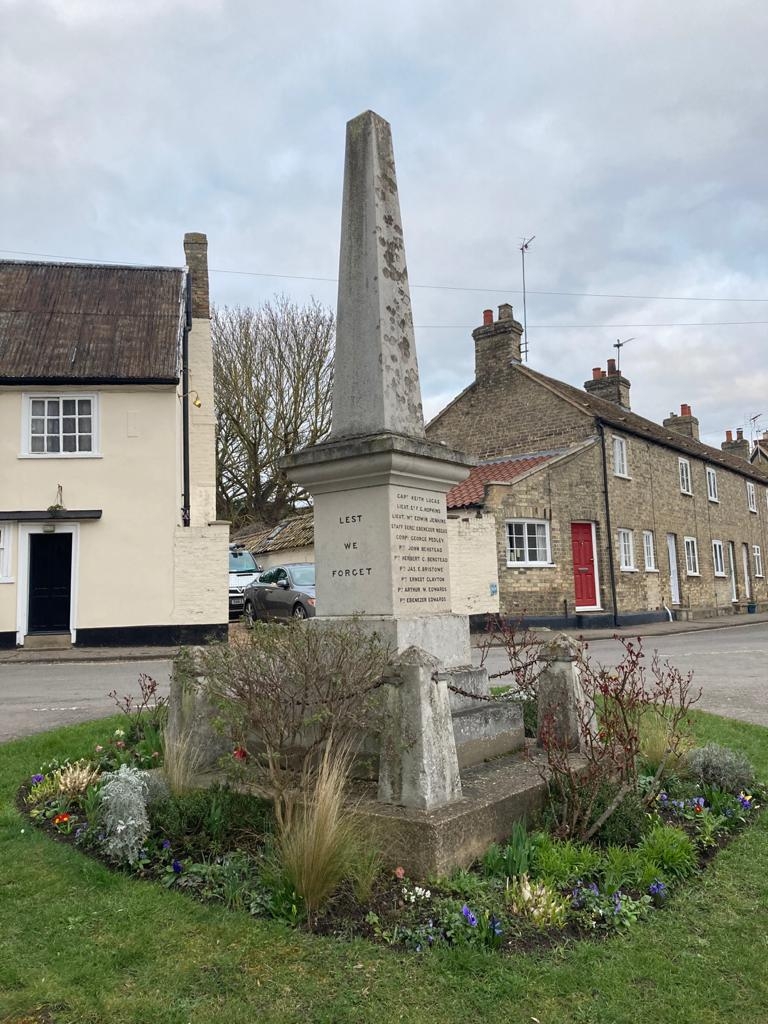 War memorial, by Ivett and Reed Ltd, unveiled in 1921, and dedicated to the fallen of the First and Second World Wars.

The Fen Ditton war memorial was constructed in Portland stone by Ivett and Reed Ltd, and was unveiled in 1921. The monument is square in plan, and comprises a tapered obelisk on a plinth, with a stepped base bounded by four Portland stone posts linked by a metal chain. The memorial carries painted inscriptions on each elevation of its plinth, and the inscription on the east elevation reads: ‘IN / GRATEFUL MEMORY / OF / THE MEN OF THIS PARISH / WHO FELL IN THE GREAT WAR / 1914 – 1918’. The north and south elevations are inscribed with twenty-two names of the fallen of the First World War (1914-18) in rank and alphabetical order. Five names of the fallen of the Second World War (1939-45) were later inscribed on the base of the north elevation. The words ‘LEST WE FORGET’ are inscribed on the west elevation of the plinth. The monument measures approximately 4.5 metres in height, and is located on an irregularly-shaped grass island at the junction of High Street and Church Street.

The concept of commemorating war dead did not develop to any great extent until towards the end of the C19. Prior to then memorials were rare and were mainly dedicated to individual officers, or sometimes regiments. The first large-scale erection of war memorials dedicated to the ordinary soldier followed the Second Boer War of 1899-1902, which was the first major war following reforms to the British Army which led to regiments being recruited from local communities and with volunteer soldiers. However, it was the aftermath of the First World War that was the great age of memorial building, both as a result of the huge impact the loss of three quarters of a million British lives had on communities and the official policy of not repatriating the dead, which meant that the memorials provided the main focus of the grief felt at this great loss.
Fen Ditton war memorial was crafted by Ivett and Reed Ltd, and the monument was unveiled by Lieutenant-Colonel F J M Stratton and dedicated by the Archdeacon of Ely on 30 April 1921. The memorial commemorates twenty-two local men who fell in the First World War (1914-18), and the names of the fallen are inscribed on the plinth in order of rank and then alphabetically. The war memorial is shown on the 1927 Ordnance Survey map. Following the Second World War (1939-45), the names of five local men who lost their lives in the conflict were added to the base of the plinth. The war memorial is prominently located at the west end of High Street at the junction with Church Street, to the east of the Parish Church of St Mary the Virgin (listed Grade II*), and to the south of the King’s Head public house (listed at Grade II).
A grant of £350 was awarded by South Cambridgeshire District Council to Fen Ditton Parish Council in 2005 for the cleaning and repair of the memorial.

Fen Ditton War Memorial, which stands at the west end of Fen Ditton High Street, is listed at Grade II for the following principal reasons:
* Historic interest: as an eloquent witness to the tragic impact of world events on the local community, and the sacrifice it made in the conflicts of the C20;
* Design: as a modest yet well-executed memorial.
* Group value: for the strong group value it holds with a number of listed buildings, including the nearby church of St Mary the Virgin (Grade II*), and the King’s Head public house (Grade II).