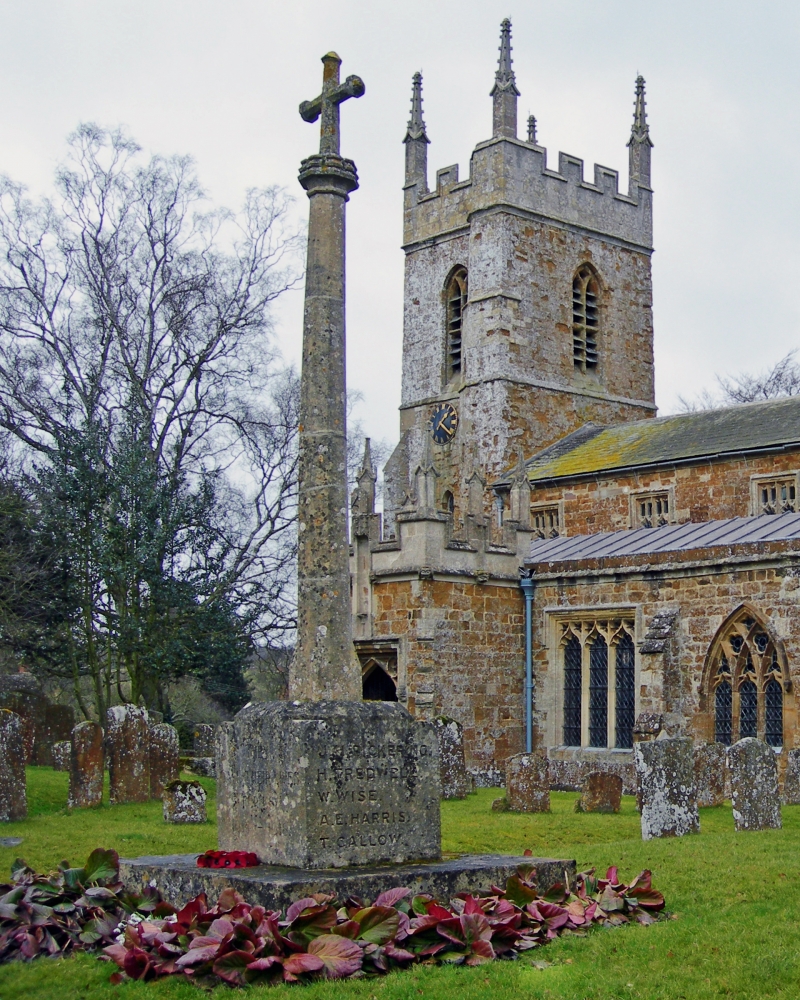 The limestone memorial comprises a Latin cross with moulded cross-arms rising from a tall, tapering, octagonal shaft. The foot of the cross is encircled by a crown. The cross shaft stands on a square plinth with a chamfered top, set on a square single-stepped base.

The front face of the plinth bears an inscription that reads THEY/ GAVE THEIR LIVES/ FOR US/ 1914 – 1918. The names of those 10 local servicemen who fell in the First World War are incised into the flanking sides of the plinth.

The memorial stands in the southern part of the churchyard of the Grade I-listed Church of St Peter ad Vincula.

This List entry has been amended to add the source for War Memorials Register. This source was not used in the compilation of this List entry but is added here as a guide for further reading, 4 October 2017.

South Newington War Memorial was designed by the renowned Gothic Revival architect Sir Walter Tapper, and built by Arthur W Sturley of Banbury. It is made from limestone donated by Captain Robert Brassey, a former Member of Parliament for Banbury, quarried from Heythrop Park in nearby Chipping Norton. Paid for by public subscription, the memorial was dedicated on 4 August 1921 by Dr Hubert Burge, Bishop of Oxford. Conservation and repair work was carried out in 2010, funded by War Memorials Trust.

Sir Walter Tapper FRIBA RA (1861-1935) was a leading late Gothic Revival architect. He was elected RIBA President from 1927 to 1929 and from 1928 was Surveyor to the Fabric of Westminster Abbey. Responsible for many listed buildings including a number of churches, such as the Grade II-listed Church of the College of the Resurrection, Stocks Bank Road, Mirfield, he was knighted in 1935 for his services in the restoration of the royal chapels. He was responsible for a number of war memorials including the Grade II-listed cross at Lancaster Gate.

South Newington War Memorial, situated in the churchyard of the Church of St Peter ad Vincula, is listed at Grade II for the following principal reasons:
* Historic Interest: as an eloquent witness to the tragic impact of world events on the local community, and the sacrifice it made in the First World War;
* Architectural interest: a tall and well-carved stone cross by the noted architect Sir Walter Tapper FRIBA RA;
* Group value: with the Grade I-listed Church of St Peter ad Vincula.